The Colorado Backcountry Hunters & Anglers (BHA) 12th Annual Rendezvous (July 23-25, 2021) returned to the location of the first Colorado BHA Rendezvous (during 2009), in the San Juan National Forest at the Florida campground north of Durango/Bayfield. The weekend included a mix of old and new activities and experiences. 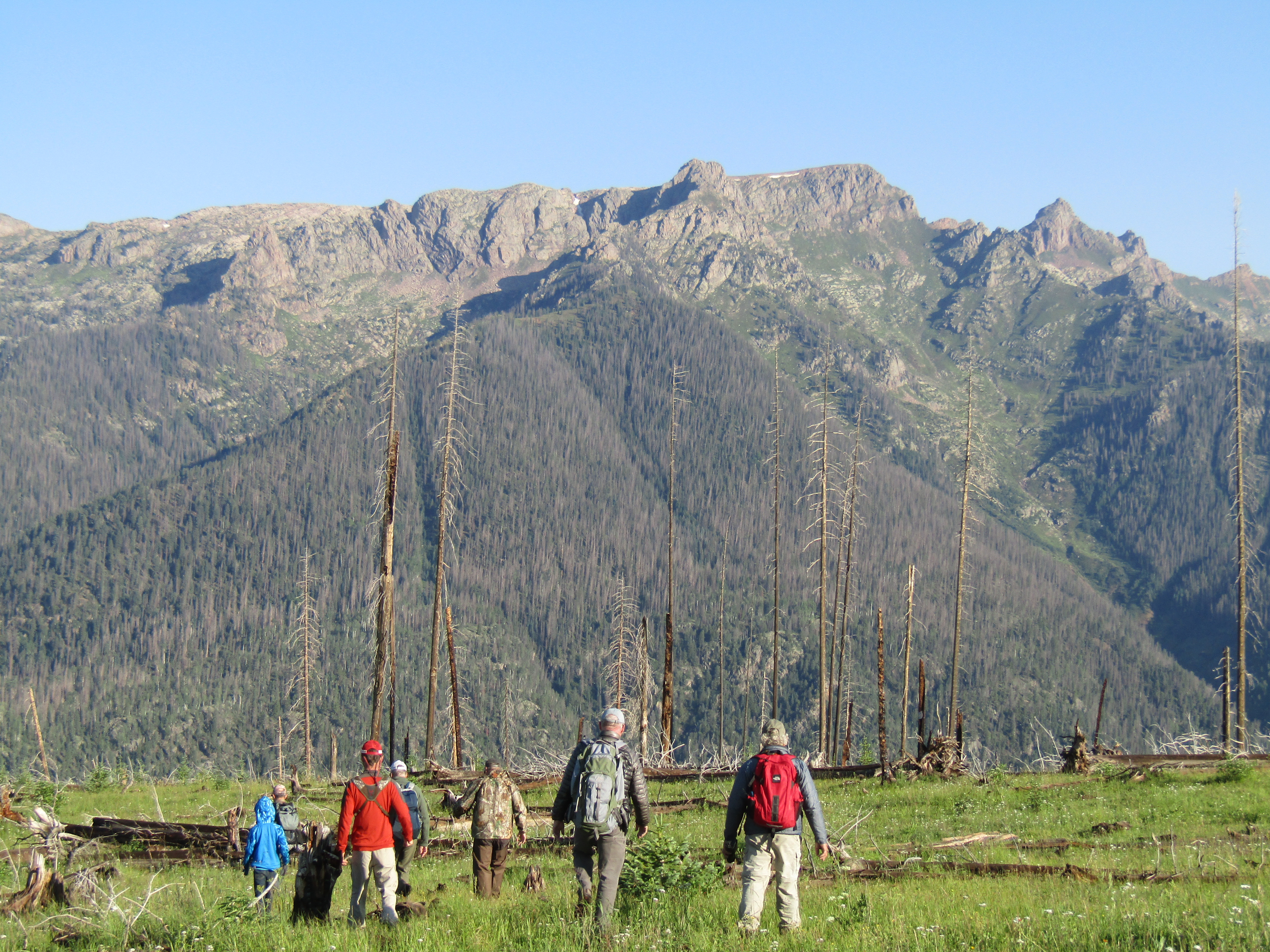 Bighorns are highly susceptible to diseases transmitted from domestic sheep if the two come in contact, explains Dan Parkinson. “We need separation or it’s a matter of time until we see a (bighorn) herd die-off,” he said. In 2016, the 9th U.S. Circuit Court of Appeals upheld a 2010 Payette National Forest Service decision to phase out some active sheep grazing permits because of concerns over disease transmission.[1] For additional/related information see the links below:

The present-day wildlife officer does much more than check licenses and enforce hunting regulations. A District Wildlife Manager is one of the “public faces” of CPW, the person the public is most likely to meet and work with. DWMs live in the communities where they work. They enforce the laws and manage wildlife in the field, but also work with school kids, deal with human-wildlife conflicts, make presentations to groups and get involved in their communities in many ways.[3]

Brandon answered a wide variety of questions on numerous topics including (in part): elk herd numbers and trends, tag allocations, the impacts of trails on habitat and big game, predator studies and reintroductions and the horses he uses/owns for patrolling the backcountry. We’re extremely grateful for Brandon’s (and CPW’s) hard work on behalf of our wild public lands, waters and wildlife. For additional/related information see the links below:

Ty highlighted a joint TU-BHA-NWF “Critical Mineral Report: A Conservation Perspective.” In addition to a section on mining in Colorado’s mineral belt, the report highlights Central Idaho and Minnesota’s Boundary Waters. Because I grew up in northern Minnesota and hunt deer and grouse in the Superior National Forest/Boundary Waters watershed every fall, this report hit home.

Northern Minnesota’s Superior National Forest watersheds are currently threatened by two proposed sulfide-ore copper mines. Chris Baldwin, a mining engineer and third generation Iron Ranger from Hibbing (Minn.) said, “If this area is mined, these sulfide wastes would need to be treated differently and isolated in a ‘geologic sarcophagus’ in perpetuity, to try to protect the headwaters of the greatest source of fresh water on the planet.”[5]

In the words of Backcountry Hunters & Anglers President and CEO Land Tawney (in the Winter 2020 Backcountry Journal): “There has never been a copper/sulfide mine that hasn’t leached. Never. Right now, the future of the Boundary Waters hangs in the balance … There shall be no mine here … not ever … not on BHA’s watch.”[6] For additional/related information see the links below:

“The site we visited was likely a short-term camp where tools were refined and sharpened,” Liz added. “Hunting of rabbits, marmots, deer, fish, grouse, etc., would have been the main animal species harvested.” Many scientists believe that big game hunting brought prehistoric peoples to the Americas more than 12,000 years ago.[7]

During the Archaic period (c. 8000 BC to AD 200) a worldwide warming and drying trend created the arid landscape found in most of the Southwest today.[8] To survive as hunter-gatherers, vast knowledge about animals and wild plants was necessary. Since the very nature of a hunter-gathering way of life requires people to move frequently as they harvested wild crops, animals and fish, their culture was “portable” and left few artifacts behind.[9]

The archaeological record of the Archaic Period reflects hunter-gatherer adaptations to a wider range of natural resources than can be identified in the preceding Paleoindian period. It also appears that the human population of the Southwest expanded gradually throughout the Archaic, possibly in response to the long-term increase in food resources. Archaic sites are generally small concentrations of broken stone tools.[10]

Some of these tools were made from obsidian, which is not found in southwest Colorado.[11] Hence, if you find obsidian in the vicinity, it’s most likely compliments of ancient hunter-gatherers. We found an obsidian flake—almost certainly handled/worked by humans over 8,000 years ago while fashioning tools/weapons—which was examined and then left in place, leaving the site undisturbed.[12]

Ancient hunters shaped obsidian into bifaces, which could be used as cutting or scraping tools and made into projectile points.[13] They used obsidian points for the tips of atlatl darts, pronounced “AT-ul-LAT-ul.” The atlatl, or spear thrower, is a two-piece weapon system, a throwing stick and a spear (normally called a dart).[14] You hurl the dart overhand and hang on to the stick. That effectively extends the length of your arm and gives the dart a lot more momentum as it flies off a little hook at the end of the stick.[15]

Primitive, but also ingenious. It’s not hard to imagine that the same species who came up with these early projectile launchers would someday be designing ICBMs.[16] The Archaic Culture Stage is also characterized by abundant remains of fiber products such as baskets; twined robes of cordage covered with strips of rabbit skin which were used for cold weather clothing; snares; and nets for catching wild game, fowl and fish; fishing lines and hooks; and fish traps.[17]

“Also, if you are interested, the MeatEater podcast has an excellent podcast with David Meltzer on the peopling of North America and mammoth hunting. It’s really good,” added Liz Francisco. “Meltzer did a bunch of work and research at the Folsom site above Gunnison.” For additional/related information see the links below: 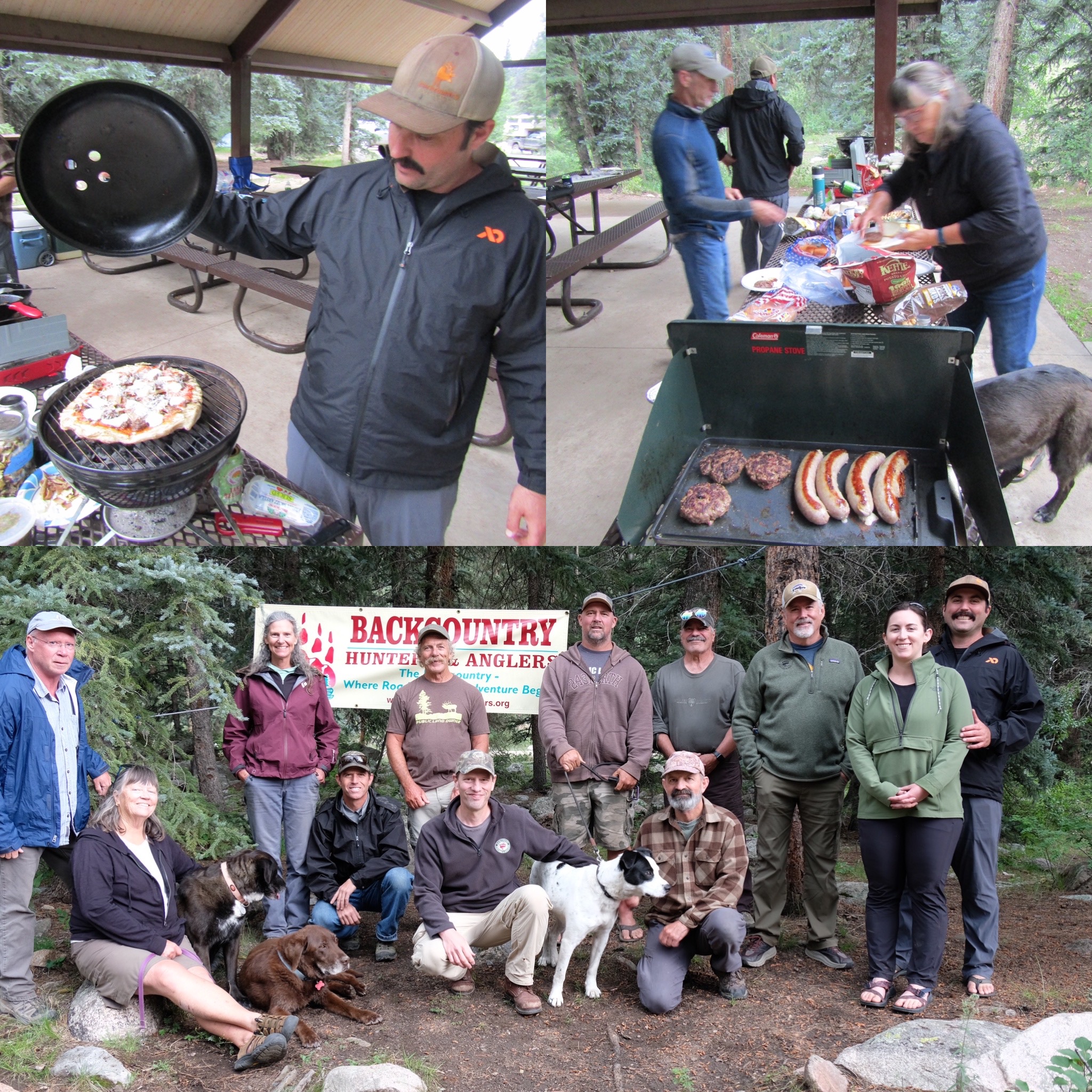 Geordie was a featured chef at the 2021 North American Rendezvous Field to Table Dinner and has organized five Colorado BHA Annual Wild Game Cookoffs. In addition, he has contributed stories and recipes to BHA’s Field to Table Blog, including Canada Goose Pitas (also featured in the 2021 BHA Calendar) and Fox Squirrel Carnitas. For additional/related information see the links below:

[1] Jonathan Romeo. “Wildlife officials will try to track bighorn sheep in Weminuche: Officials to use a helicopter to find and fit animals with GPS collars.” The Journal (Cortez-Durango, Colo.): 11/20/18.

[5] Chris Baldwin, mining engineer and third generation Iron Ranger (from Hibbing). “Sulfide copper and nickel mining should never be attempted on the border of the BWCA.” MinnPost.com: 6/10/21.

[8] The University of New Mexico (Albuquerque). “The Archaic Period.” The Maxwell Museum of Anthropology: 5/19/18.

[10] The University of New Mexico (Albuquerque). “The Archaic Period.” The Maxwell Museum of Anthropology: 5/19/18.

[11] The Cochetopa Dome is the only definitive location of obsidian in the state of Colorado, although Nathrop, Silver Cliff, and Beaver Creek have also been cited by some. Cochetopa Dome is located about 20 miles south of Gunnison. SJNF Archeologist Liz Francisco: “The Cochetopa obsidian source was not a prime source for collecting tool grade obsidian and was not very much exploited. The obsidian there erodes out as small marbles about the size of an elk dropping and only small sharpening tools could be made. The obsidian at the Lemon site likely came from Polvadera Peak in New Mexico which produced large cobbles.”