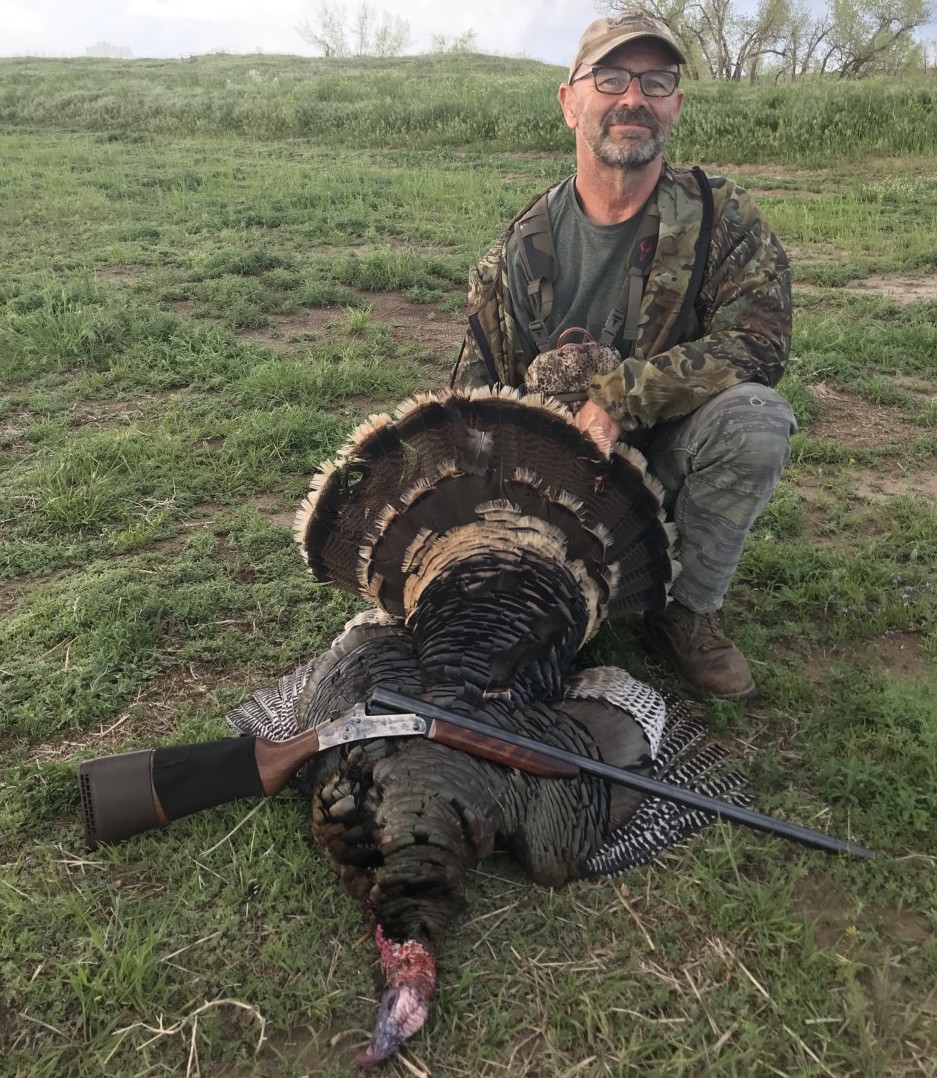 Chris was raised in a little logging town in the coastal range of California. “When I was in junior high I’d come home from school, dump my books, and wander off into the woods ‘till after dark,” he said. “From high school on I worked after school - but they were always outdoors jobs.”

He hunted black-tail and mule-deer with his grandpa, dad and brothers when he was young, and fished with his grandpa and grandma before that. “When I was a little older it was all about wild pigs. Then I moved to Colorado and added elk to the menu,” Chris added. “Eventually, with the ‘coming of age’ of my first son (i.e., getting his hunter education card), small game and turkeys crept their way into my life.”

Chris joined the United States Marine Corps (USMC) in 1982, working/serving as an armorer and marksmanship instructor. He extended his service twice more in the Marine Corps Reserves before hanging up his dress blues in 1994 as a staff sergeant. During the early 1990s he moved from California to Colorado “for more breathing room.”

“I went to Western Colorado University (then Western State College) and got a degree in biology,” he explained. “Kicked around the woods doing seasonal work for Colorado Division of Wildlife (DOW) for about a decade - some of the best stuff you could get ever get a paycheck for; trapping bears, tracking lynx, searching for wolverines - then hired on permanent in 2000. Salida was my first duty station, but I hopped back over the hill to Gunnison in 2004, where as a game warden I worked to hold the ‘thin green line’ in the Elk Mountains for the next 17 years.”

The first gun Chris ever owned was a muzzleloader pistol he bought at about 13 years old. “I have a couple others now, but they mostly live in the closet,” he explained. “I prefer packing my break-action single-shot 12 gauge (aka, ‘The Mule’) and I have a few recurves that are addicted to grouse, but a none-too-fancy 30.06 Savage does most of the heavy lifting around the place.”

“Now, just about anything I can draw a tag for is welcome to join my family at our table - though no critters out there should panic at that - I eat my share of tag soup, to be sure,” Chis added. “I’m a cold-mountain-stream, beaver-pond-brookie, high-mountain-lake cut-throat fly-fisher mainly, but I can be coaxed out to big flat-water or farm-ponds for pretty cheap.

Through luck and diversity, I mostly manage to keep the freezer more half-full than half-empty.”

Chris retired from Colorado Parks and Wildlife (CPW) in 2021 and is “enjoying the ‘sporting life’ at a leisurely glide - fishing on a whim and blacking out August - November on the calendar with a single word: ‘Hunt.’” He lives in Gunnison with his wife Sonja and two fledging sons, Jake and Joey, but is contemplating significant time afield to accomplish a retirement goal of hunting small game in all 50 states.

In addition, near the close of his career as a game warden, Chris started adult-hunter mentoring. “I’d take on a few mentees each season, and found it terrifically rewarding both professionally and personally,” he said. “Guiding a never-hunted-before to their first harvest is an incredible journey, and one that I intend to continue on.”

Chris joined BHA pretty early on, some 15 years ago. “A co-worker had told me about it, then he went to a Rendezvous and came back with a ‘Public Land Owner’ tee-shirt and that iconic bear-paw hat,” Chris said. “I was like ‘Ya, I’m with that’ and got a family membership.”

Founded by Mike Beagle, a former U.S. Army field artillery officer, and formed around an Oregon campfire, in 2004, Backcountry Hunters & Anglers is the voice for our nation’s wild public lands, waters and wildlife. With over 40,000 members spread out across all 50 states and 13 Canadian provinces and territories—including chapters in 48 states, two Canadian provinces and one territory, and Washington, D.C.—BHA brings an authentic, informed, boots-on-the-ground voice to the conservation of public lands. Since the Colorado BHA chapter was founded by David Petersen (a former U.S. Marine Corps helicopter pilot) in 2005 (the first official BHA chapter), they’ve grown their boots-on-the-ground presence to over 2,000 dedicated hunters and anglers.