If you, by chance, have already read Part I of this two-part screed, you generally know what to expect.[1] Hence, I won’t try to dissuade you from wasting another five or ten more minutes of your time on Part II. My hope, however, is that some of my turkey hunting experiences can enhance yours and hopefully shorten the learning curve for new turkey hunters.

First, some turkey hunting statistics. Colorado Parks and Wildlife’s “2020 Spring Turkey Harvest Report” estimates that nearly 24,000 hunters pursued spring turkeys in Colorado during 2020. CPW’s report also notes that the number of turkey hunters has increased by 250% since 1999. In addition, CPW estimates that 26% of hunters with Over-the-Counter (OTC) licenses harvested a bird compared to 51% with Limited licenses.[2] I’ve only hunted OTC units.

Given the odds of putting meat in the freezer, keep in mind that the best part of turkey hunting is not the kill, but the amazing encounters with gobbling, strutting toms, yelping hens and the general exhilaration of being outdoors in the mountains after a long winter. Not to mention all the other wildlife encounters along the way, from elk herds migrating to higher, greener pastures to wily coyotes sneaking in for a peak while you’re serenading a tom. 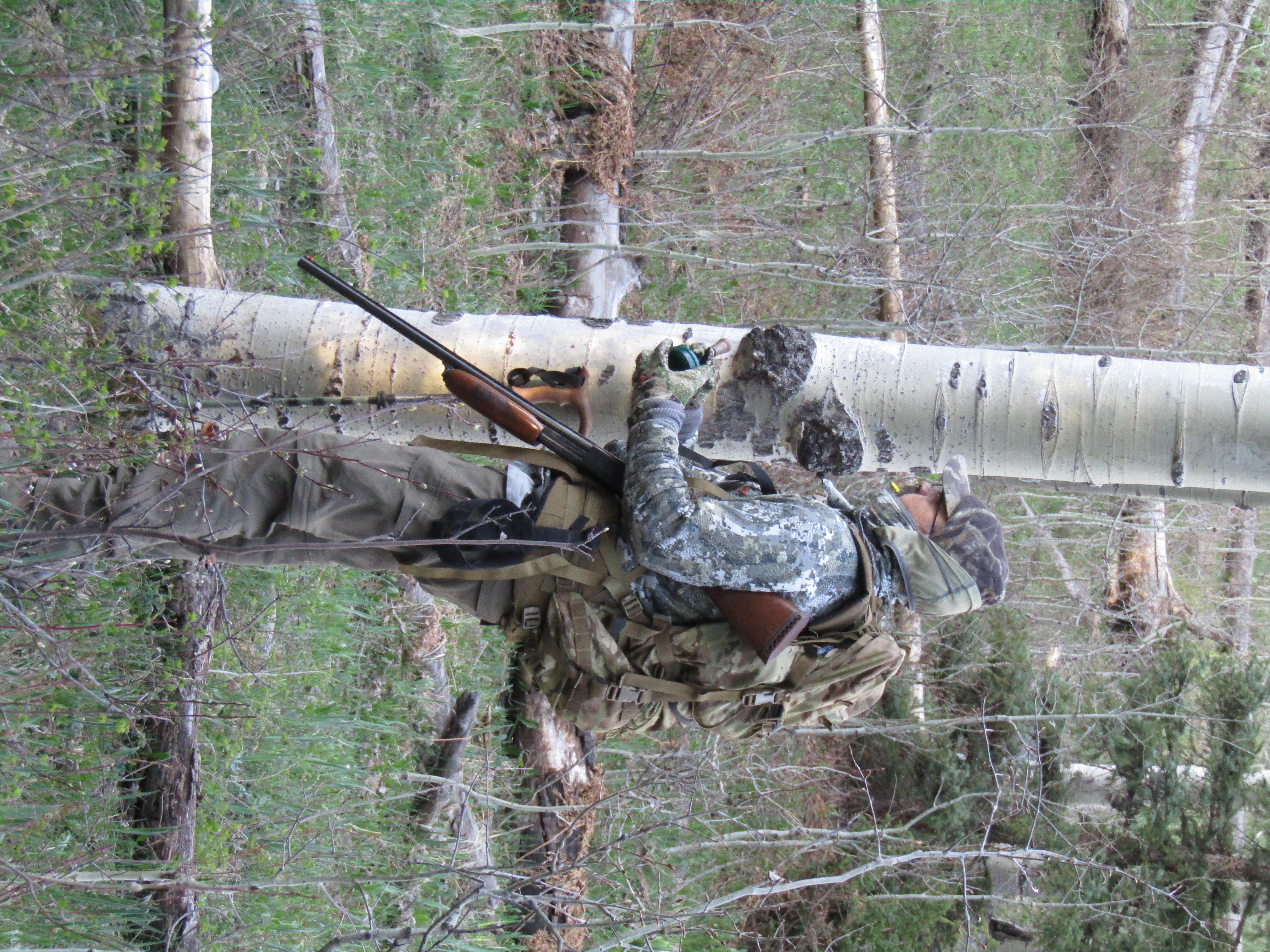 As explained in Part I, over the course of a decade-plus I’ve gone from knowing next to nothing about turkey hunting to knowing just enough to be occasionally dangerous (to toms). I’ve also written a few stories for Colorado Outdoors detailing some of my experiences and lessons learned. As detailed therein, sometimes success comes quickly, and there’s not as much of a story behind it. However, turkeys have an uncanny ability to whip turkey hunters’ behinds.

Failure is much more common, as CPW’s harvest report confirms, and more fun to write about. For me, writing—or what passes for it—and learning have always gone hand in hand. Writing about life experiences reinforces the lessons learned and fans the flame for more such experiences, which leads to more writing and so on. A relentless (albeit effective) cycle of internalizing and sharing turkey hunting (and other) information and experiences.[3] 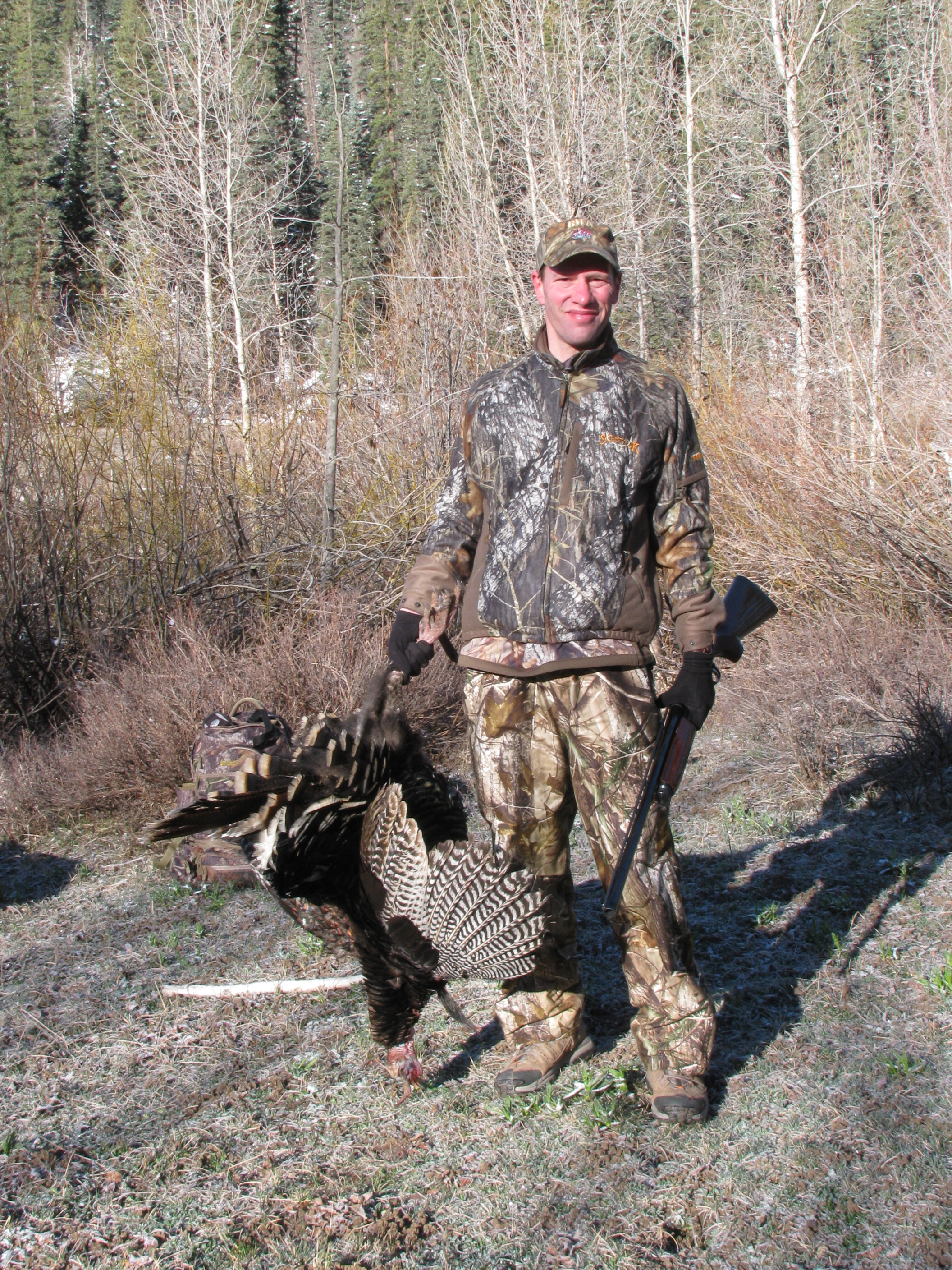 Part I of this missive includes passages from six Colorado Outdoors turkey-hunting stories penned between 2013-2016.[4] Included here, in Part II, are selections from the second group of stories (7-13), written from 2016-2020.

7.) “Mountain Merriam’s (Turkey) Hunt.” Colorado Outdoors: 4/22/16. “My first San Juans turkey was taken only a couple miles (and a couple hundred feet in elevation change) from where I killed my first elk. Zach Roth, Littleton-based regional director for the National Wild Turkey Federation, says the Merriam’s turkey sub-species is often found in the hilly big-game habitat comprising much of the state’s public lands. ‘Anywhere that people hunt elk, there are probably turkeys there too,’ says Roth.”

8.) “Tom Foolery: Hunting Mountain Merriam’s.” Colorado Outdoors: 5/3/17. “We hunt an over-the-counter (OTC) unit, and the most recent Colorado Parks and Wildlife turkey hunting data (for 2015) shows a 30 percent success rates for OTC licenses holders versus 50 percent for limited license holders. Realtree contributor, Steve Hickoff, says: ‘The [Colorado] Merriam’s population lives in some rugged country; their nomadic traits can really spread them out and test your patience. You can go for hours, even days, and not hear a gobble.’”

9.) “Hunting Colorado’s Mountain Merriam’s (& The Tenth Legion).” Colorado Outdoors: 5/2/18. “The best-known book of turkey hunting’s poet laureate, Colonel (retired) Tom Kelly, is Tenth Legion. The title comes from the Tenth Legion of the Roman Army, a matchless military force that stood fast against barbarian hordes for centuries. Over generations, the soldiers forming the Tenth Legion’s ranks became a cult, a breed apart, and their feats have become a touchstone for unstinting commitment, writes Jim Casada in his American Hunter article, ‘Reflections of a Marvelous Madness.’”

“Such is the commitment and dedication I see demonstrated by those like my friend, Rick Hooley … Rick is a San Juan National Forest Habitat Watch Volunteer for the Colorado Backcountry Hunters & Anglers (BHA), and he’s devoted a significant chunk of his life to learning the habits and habitats of turkeys, elk, trout and other wildlife in southwest Colorado’s San Juan Mountains.”

10.) “Hunting Turkeys (& Tyrannosaurus Rex).” Colorado Outdoors: 1/10/20. “It seems as inevitable as death itself for those of us who are addicted to the booming ‘Gobble-obble-obble!’ of wild turkeys reverberating through the fields, woodlands and mountains during springtime. As memories of fall hunts fade and winter takes hold, a new year begins and thoughts of turkey hunting bubble up in our collective psyche.”

“The thunderous gobble of a wild turkey is one of the most recognizable sounds in all of nature. A large part of what attracts me—and many others, I suspect—to turkey hunting is simply the sound of toms sounding off. Every time I’m throttled by a booming gobble, I am reminded why chasing Merriam’s in the high and wild San Juan Mountains of southwest Colorado is one of my favorite hunts. Mix in the strutting, spitting and drumming experienced when a tom closes to shooting distance and you have an irresistible hunting combo.

11.) “Mountain Merriam’s Chess Match.” Colorado Outdoors: 3/13/20. “For over a decade now, I’ve had the privilege of playing chess with mountain Merriam’s in southwest Colorado’s high and wild San Juan Mountains, which measure some 120 miles wide and 60 miles from north to south. Hunting this vast expanse of wild public lands is still possible today thanks in large part to the efforts of Theodore Roosevelt. The 1.8-million-acre San Juan National Forest was created by proclamation of President Roosevelt on June 3, 1905.”

“Today the public land Roosevelt protected provides a rich hunting ground every spring and fall. ‘Probably the single most important American to take to the hunt was Theodore Roosevelt, the 26th President of the United States,’ explains Jim Posewitz, in Rifle in Hand: How Wild America Was Saved. ‘He was the greatest conservationist any society has ever known, and he savored life while spending it, in his words, ‘rifle in hand.’”

12.) “Gobbler Fever: Curse & Cure.” Colorado Outdoors: 5/1/20. “‘Buck fever’ is much the same feeling you get before a big game, or before you finally decide to call and ask her out,’ wrote Allen Morris Jones in A Quiet Place of Violence. ‘Your stomach twists up into your throat because you have worked hard toward the completion of a deeply-felt project, and it’s about to be fulfilled. Or not’ …”

“Experiencing gobbler fever is not necessarily a bad thing. In fact, it’s the opposite. That feeling and the associated adrenaline rush is the spark, the wildfire that hooked me on turkey hunting. It serves to counteract the unrelenting pressures of everyday life. It’s something ancient and understandable. The first day I’m calm and emotionless when stalking a tom or any other wild animal will be my last day of hunting.”

13.) “Mountain Merriam’s Therapy (& Botched Shots).” Backcountry Hunters & Anglers: 5/18/20. “How would you react to being told that the L-4 and L-5 vertebrae in your lower back need to be fused together, held in place with four outsized screws? The L4-L5 are the two lowest vertebrae of the spine … Rick carried a 20-gauge and light pack to ensure he didn’t overstress his pinned vertebrae. I carried a relatively light pack, with plenty of room for turkey breasts … With the stunning juxtaposition of a setting moon illuminated by the rising sun overhead, we crossed a small stream into some quintessential southwest Colorado turkey habitat.”

David Lien is a former Air Force officer and co-chairman of the Colorado Backcountry Hunters & Anglers. He’s the author of “Hunting for Experience: Tales of Hunting & Habitat Conservation” and during 2014 was recognized by Field & Stream as a “Hero of Conservation.”[5]