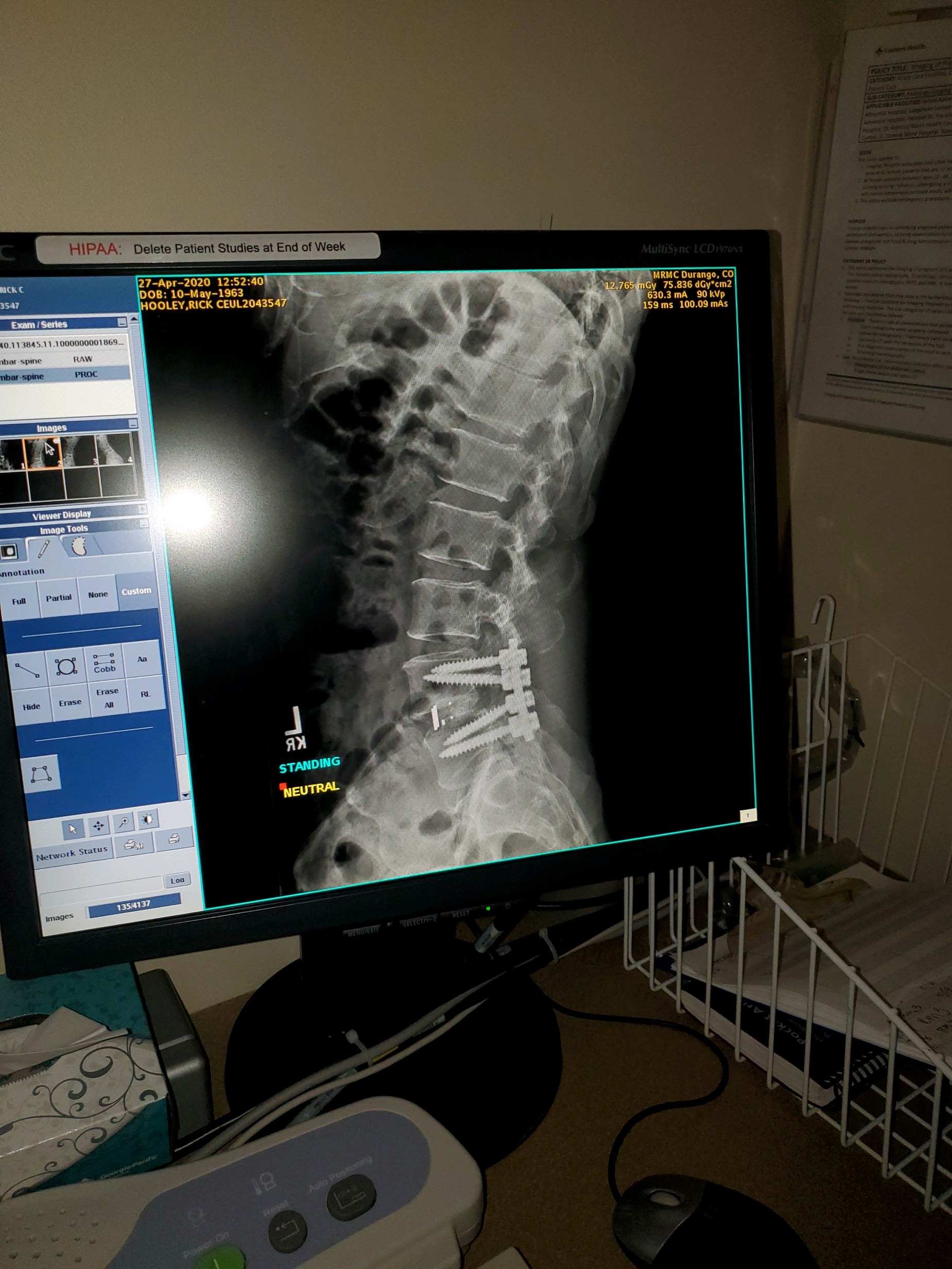 How would you react to being told that the L-4 and L-5 vertebrae in your lower back need to be fused together, held in place with four outsized screws? The L4-L5 are the two lowest vertebrae of the spine. Together with the intervertebral disc, joints nerves and soft tissues, they provide a variety of functions, including supporting the upper body and allowing trunk motion in multiple directions. Due to its heavy load-bearing function and wide range of flexibility, the L4-L5 is susceptible to injury and/or degenerative changes.[1]

For a lifelong backcountry hunter and angler like Rick Hooley—also a Backcountry Hunters & Anglers southwest Colorado Habitat Watch Volunteer—that’s particularly bad news. He went in for surgery on March 9, about four weeks prior to the opening of Colorado’s spring turkey season (April 11-May 31). “The surgery I had was an L-4/L-5 fusion,” he explained. “One of the best healing therapies is walking and not a better way to do it than tying in a turkey hunt. I’ve been walking 1 to 5 miles a day since the surgery with summer backcountry fishing trips and fall hunts as my motivation.”

Regardless of Rick’s robust rehab routine and positive attitude, turkey hunting was no sure thing. “I was able to get x-rays on Monday. Everything looked good but the Doc said it would take at least another month for the fusion to take place,” he said (on April 30). “I saw a physical therapist yesterday for the first time and she said 6 weeks of PT before I can carry a pack over 5 pounds … I managed to set up a small pack with essentials that’s less than that. I haven’t been out yet.”

For over a decade now, I’ve been hunting mountain Merriam’s in southwest Colorado’s San Juan Mountains. Colorado Backcountry Hunters & Anglers founder David Petersen (www.davidpetersenbooks.com) introduced me to turkey hunting.[2] Then, Rick took me under his wing and helped put my first toms in the freezer.[3] During recent years, I’ve hunted mostly solo, but what I learned from David and Rick has made me a lifelong turkey hunter.[4] 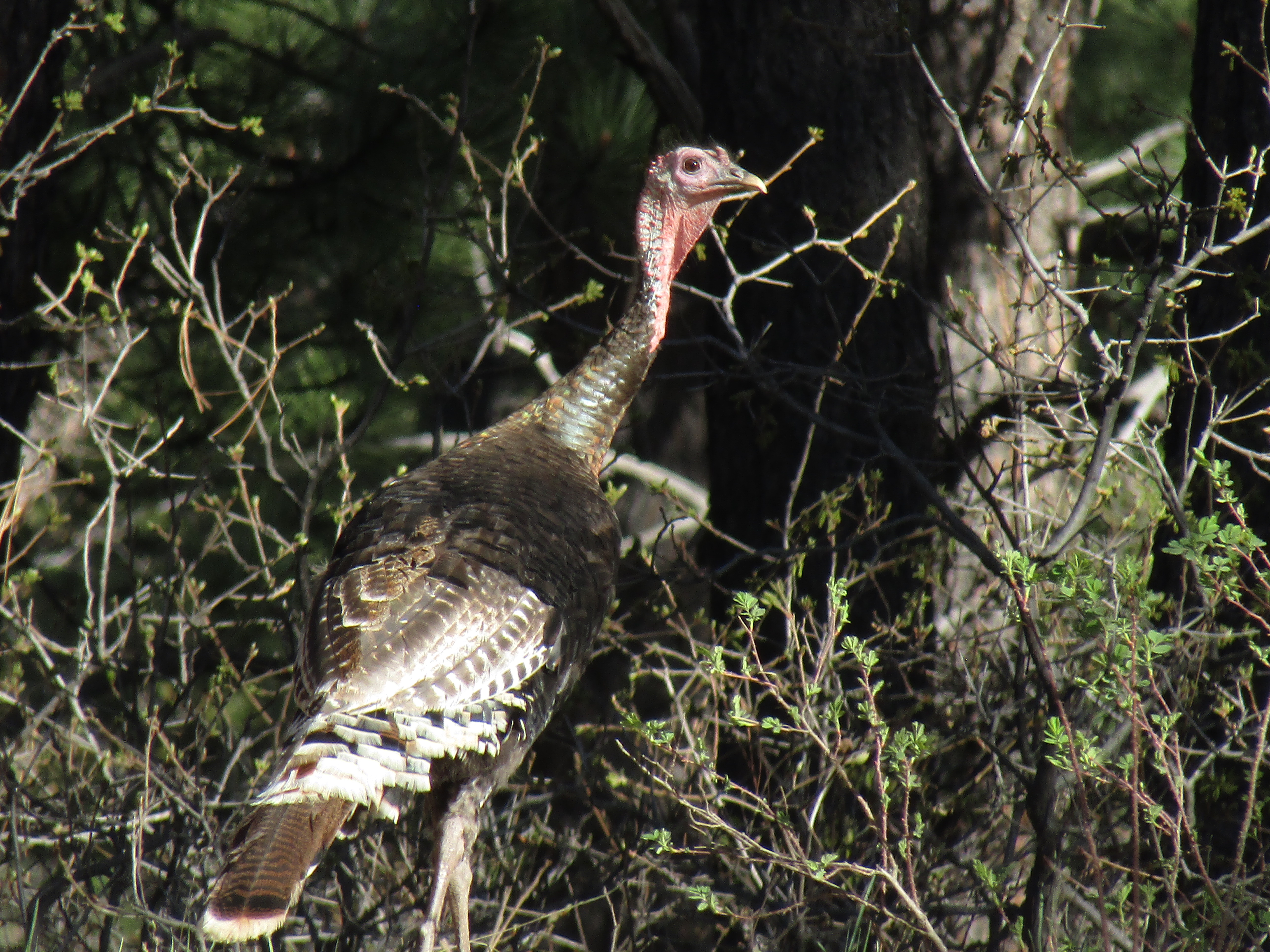 Not long before the spring 2020 turkey season kicked off, I contacted Rick about getting together for a hunt during the first week of the season, but he was out of commission until at least early May. I had the week off and hunted four days, bumping (i.e., spooking) three toms and missing another. First botched shot of the season! However, on day five I recovered and put one in the freezer (see: “Gobbler Fever: Curse & Cure.” Backcountry Hunters & Anglers: 5/4/20), but I wasn’t done with botched shots.[5]

Although I’d punched my tag, Rick was on the mend and itching to get out. “By next weekend I’ll have almost 9 weeks since the surgery, one more visit to the physical therapist, and more confidence in what I can get away with without messing this thing up,” he said. “I’ll let you know how it goes and maybe we can get out … if it goes well and you’re able.”

Later, Rick said he could hunt on May 9, so I returned to the San Juans, encountering two jakes not far from where we planned to meet in the morning. A good sign. Rick arrived at 4:30 a.m. and we started a three-mile hike through 600 feet of elevation loss under a nearly full moon casting blue-tinted shadows across the southwest Colorado landscape.

Rick carried a 20-gauge and light pack to ensure he didn’t overstress his pinned vertebrae. I carried a relatively light pack, with plenty of room for turkey breasts, along with a camera at the ready for photos of strutting toms. With the stunning juxtaposition of a setting moon illuminated by the rising sun overhead, we crossed a small stream into some quintessential southwest Colorado turkey habitat.

During our initial circuit of the area, no toms responded to yelps or locator calls. However, we found sign of recent turkey activity. Then, at 7:30 a.m., our luck changed when a tom sounded off downstream. After some back-and-forth chatter—“yelp, gobble, yelp, gobble,” etc.—he closed the distance. We set up in a shaded area with an open, sun-drenched meadow directly to our front, a perfect locale for a strutting tom to show off. Within minutes he was in the field, but obscured from camera view. 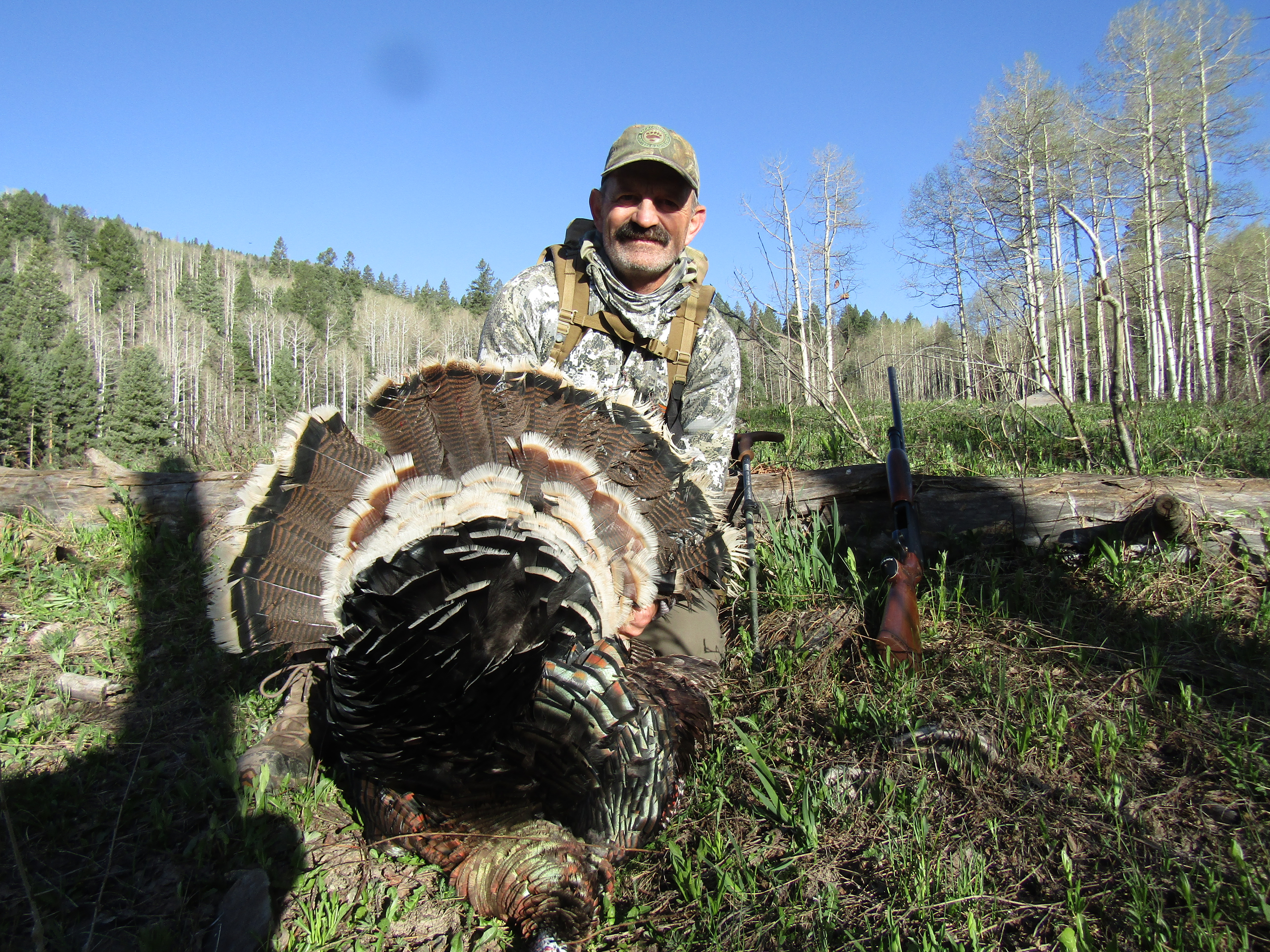 “A spring gobbler likes to strut in to a calling hen—tail fanned wide, wings half-extended and held low so that the tips drag the ground, stepping with a haughty, head-bobbing gait,” David Petersen explains in his book Going Trad: Out There With Elkheart. “To accommodate this flashy showmanship, he needs a fairly open approach avenue … When he gets to where he thinks the calling hen can see him, he’ll want a spacious stage on with to perform his pow-wow dance. Thus, the most effective set-up is at the edge of a small clearing with an open approach.”[6]

Standing behind a tree some fifty feet from Rick, with camera at the ready, I noticed the battery indicator flashing red. The strutting tom continued closing—“purr, gobble, purr, gobble,” etc. As soon as he starting strutting in our direction, my battery died. Second botched shot of the season!! However, Rick didn’t miss his shot. Despite having a lower back held together with four metal screws, he hiked six miles (round trip), called a cagey tom to within 20 feet and closed the deal.

“Wasn’t sure I was going to be able to hunt this year due to back surgery in March,” Rick explained to friends after the hunt. “I got the OK from my doc to start easing back into normal activities last Tuesday. Feeling pretty lucky to be able to find this guy this morning. Thanks to my friend David Lien for helping me out.” In the words of Southwest Colorado BHA Assistant Regional Director, Luke Kline: “Glad you could get out and do some surgery recovery in style.” Me too.

David Lien is a former Air Force officer and co-chairman of the Colorado Backcountry Hunters & Anglers. He’s the author of “Hunting for Experience: Tales of Hunting & Habitat Conservation” and during 2014 was recognized by Field & Stream as a “Hero of Conservation.”[7]