Why Hunt Mountain Merriam’s? (Part I) 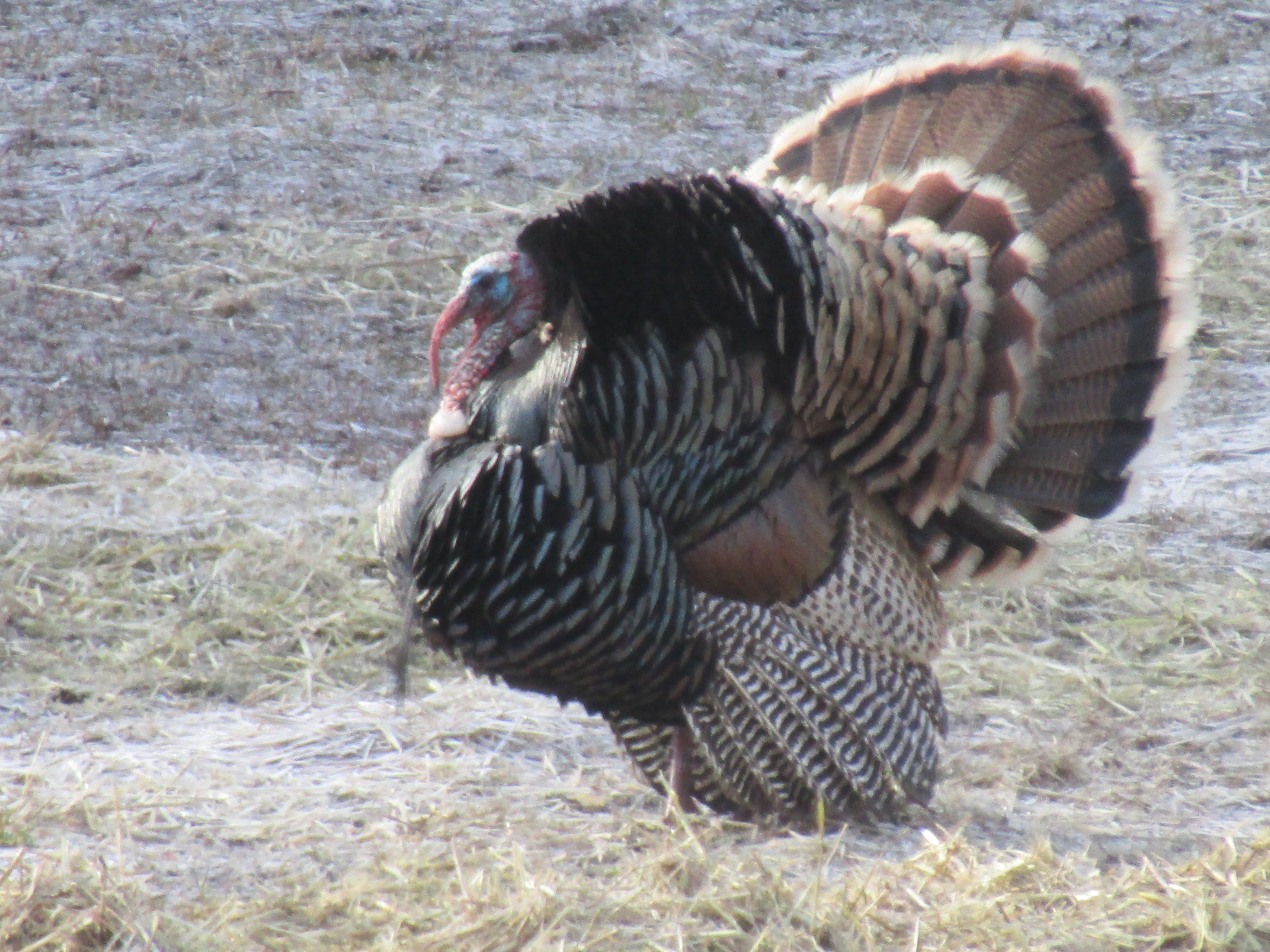 After ten years or so of chasing mountain Merriam’s turkeys through the ponderosa pine-dotted mountainsides and meadows of southwest Colorado, and occasionally putting one in the freezer, it seems like a good time to reflect on the reasons why so many of us find turkey hunting so addicting. Put plainly, “Why hunt mountain Merriam’s?”

To those so afflicted, it may seem like a dumb question, but I know plenty of longtime hunters who have never longed to hear the primordial call of a gobbling tom in the April woods. There was a time when I counted myself among them. However, once the addiction takes hold, it’s transformative.

Over the course of a decade-plus, I’ve been transformed from a turkey hunting greenhorn to an experienced greenhorn, the primary difference being that the former knows next to nothing and the latter knows just enough to be occasionally dangerous to love-struck toms. That said, even turkey hunting “experts” will tell you, like in life, the learning process never ends.

With glacier-like swiftness, I’ve progressed from watching, listening and learning—with the limited allotment of brain cells bestowed—to applying what I’ve learned, using the tactics and techniques of calling and “running and gunning” to chase mountain Merriam’s each spring. It has been a relatively steep but satisfying learning curve surmounted with the help of two turkey-hunting aficionado friends.

Colorado Backcountry Hunters & Anglers (BHA) founder David “Elkheart” Petersen, who first introduced me to turkey hunting, and Colorado BHA Southwest Colorado Habitat Watch Volunteer Rick Hooley, who taught me the finer points of mountain Merriam’s hunting over the course of many shared hunts. The curve would have been significantly steeper without their patient tutelage.

Back in April 2008, David Petersen emailed me a few weeks before our hunt, saying: “Turkey hunting is awful this year, with still a lot of snow and birds hard to find. But I’m hunting anyhow as that’s how I pay back for the sins of a long winter past.” As good a reason (or excuse) as any to hunt mountain Merriam’s.

I’ve subsequently written a dozen or so stories for Colorado Outdoors about turkey hunting and it’s possible (albeit not probable) reviewing select passages might provide some insights to, and expand on, David’s introspective rationale. Hence, here I’ve plucked excerpts from the first six Colorado Outdoors tom chasin’ stories, penned between 2013-2016. 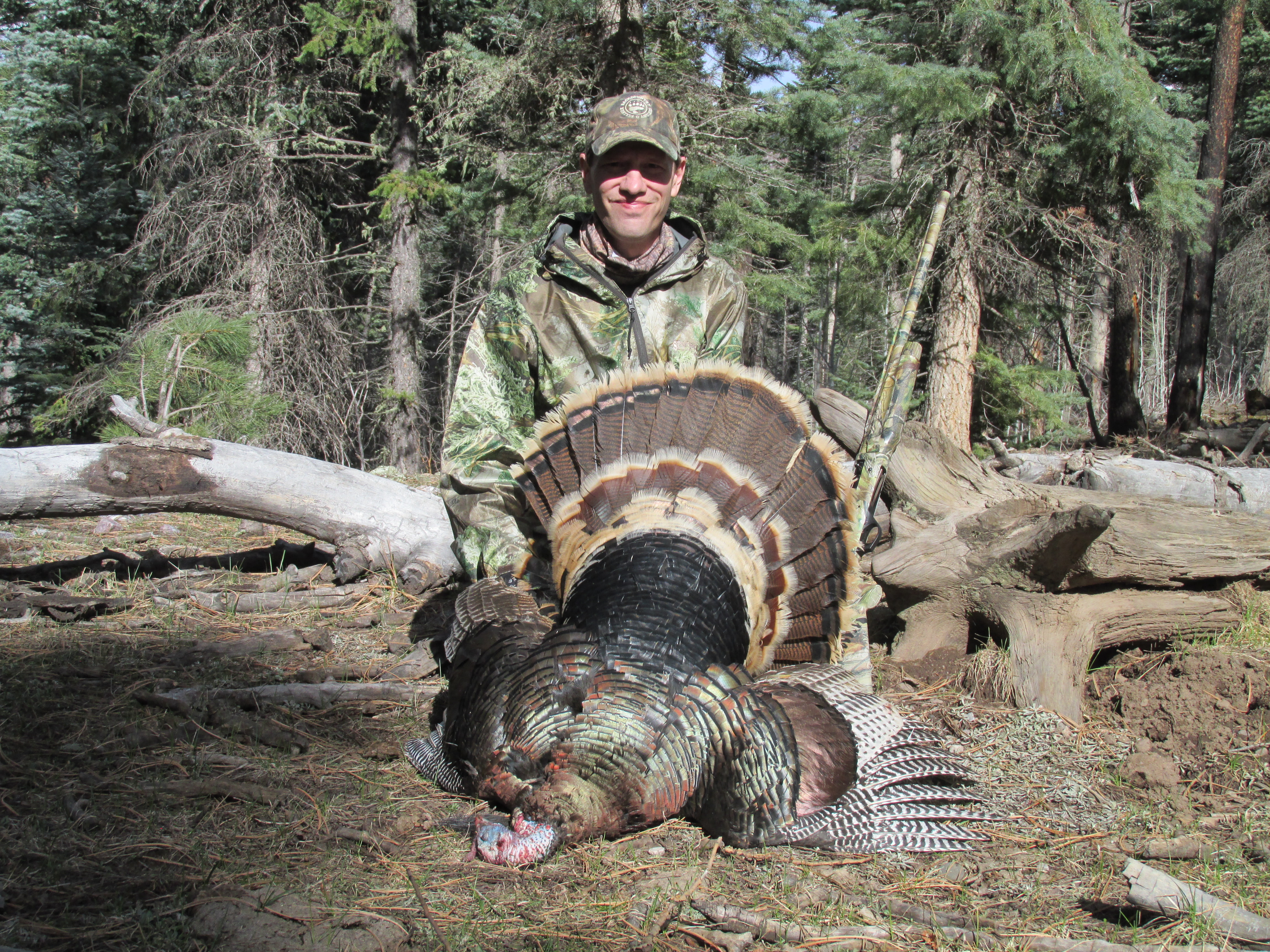 1.) “Backcountry Turkey Hunt.” Colorado Outdoors: 12/5/13. “Hunting turkeys is mostly about getting back into the wilds after riding out a long winter. And if you’ve been privileged to harvest one of these magnificent avian specimens, you know the wild turkey is North America’s second largest bird, after the trumpeter swan. A mature gobbler may stand 4 feet tall and weigh around 24 pounds, with wings spanning 5 feet.”

2.) “First Turkey.” Colorado Outdoors: 4/2/14. “Anyone who’s heard the echoing ‘Gobble-obble-obble!’ of a longbeard at dawn during April knows something primordial lives in the woods, hills, mountains and valleys of this country and continent. It’s an explosive vocalization, one like no other, that my friend David Petersen says is, ‘at once high-pitched, deep-throated, melodic and maniacal, with emphasis on the last quality.’”

“I first hunted longbeards with David Petersen ... during May 2008, and although we never saw a turkey during that hunt, we heard a tom gobbling from the roost at dusk and dawn. His Gobble-obble-obbles! echoed down the mountainside, reverberating through our sparse backcountry camp in the San Juan Mountains. That’s all it took for me to know there’s no better way to spend a spring morning in the mountains than chasing toms …”

3.) “Backcountry Tom: Turkey Hunting in Colorado’s San Juan Mountains.” Colorado Outdoors: 3/11/15. “Wild turkeys are wary and supremely adapted for survival on the Colorado landscape—they live through the vast majority of encounters with hunters. During three days of hard hunting [with Rick Hooley] we had around a dozen toms respond (from a distance) … with possibly half of them sounding as if they were at some point moving in our direction.”

“We set up a half-dozen ambushes, but just one of those toms closed to shooting distance—the only one we actually saw. But even if you don’t see a tom while hunting, just hearing gobblers grace the mountains with a chorus of rattling vocalizations makes my day and hunt complete. The gobble alone is largely responsible for many hunters addiction to this grand game bird.”

4.) “Spring Elk Scouting & Shed-Antler Hunting.” Colorado Outdoors: 4/29/15.” After wrapping up a backcountry turkey hunt with Colorado BHA Habitat Watchman Rick Hooley (we both managed to harvest toms), the next morning was set aside for revisiting some of my fall elk hunting spots, including the locales where two 6x6s were taken the previous two falls. At about 9,500 feet, I came across a 6x shed. After scouting some new, higher terrain, I decided to pass through the same area on the way down in hopes of locating the matched shed, and found the 6x (matching) antler partly buried in the duff about 100 feet upslope from the first one.”

“Shed hunters who stumble onto even a single side of a big animal’s antlers are generally thrilled, as I can attest. And finding both sides—a rarer occurrence—is still more exhilarating. In addition, it’s a convenient excuse (not that we need one) to get outdoors after a long winter and a great way to spend even more time in the field during (or after) turkey hunting season. As David Petersen says, about expending the effort to get out there and experience the backcountry, ‘There’ll be plenty of time for comfort in our graves.’”

Be aware that from Jan. 1 to Dec. 31, a permit is required to hunt for sheds east of I-25 (as of 2018). Those heading into areas west of I-25 will also need a permit and must wait until May 1; the region is closed to shed hunting from Jan. 1 to April 30. See the “Collection and Possession of Shed Antlers” section of the Colorado Parks and Wildlife (CPW) website for additional information: https://cpw.state.co.us/antlershed

5.) “5 Tips for Hunting Merriam’s Turkeys.” Colorado Outdoors: 5/14/15. “Rick Hooley and I hunt Merriam’s from a backcountry camp in the San Juan Mountains, where we also encounter plenty of elk. The habitat here encompasses a lung-busting mix of small canyons and steep mountainsides containing a healthy dose of ponderosa pine and Gambel’s oak intermixed with small, grassy clearings—terrain tailor-made for mountain Merriam’s.”

6.) “5 (More) Tips For Hunting Merriam’s Wild Turkey.” Colorado Outdoors: 4/15/16. “I refer to toms that come in without gobbling—thus, not alerting you to their approach—as ‘silent runners.’ This year Rick and I had three toms come in silent, which usually requires an extra dose of the aforementioned patience, along with constant vigilance. Later in the season, when toms have been hunted/pressured, they’re more likely to come in silent." 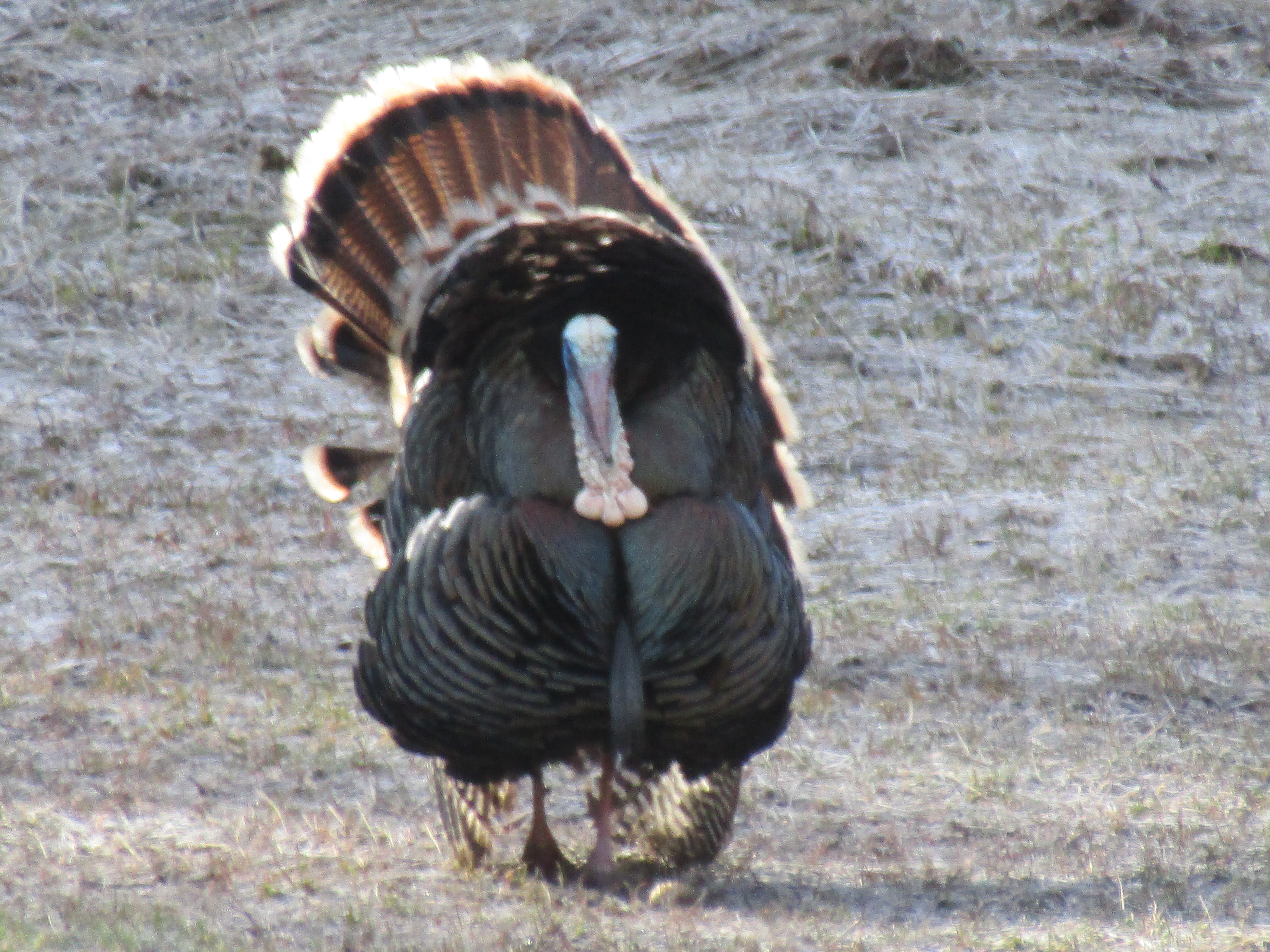 If you’ve managed to negotiate this bumpy trail of words this far, I commend you for tolerating rough prose and recommend reading the next installment, Part II of “Why Hunt Mountain Merriam’s?” However, before closing out Part I, a few words of wisdom from one of turkey hunting’s greatest writers, Archibald Rutledge, seem appropriate: “Some men are mere hunters; others are turkey hunters.”[1]

David Lien is a former Air Force officer and co-chairman of the Colorado Backcountry Hunters & Anglers. He’s the author of “Hunting for Experience: Tales of Hunting & Habitat Conservation” and during 2014 was recognized by Field & Stream as a “Hero of Conservation.”[2]