The word elk is believed to have come from the Greek, alke, meaning strength. This makes sense because the elk is one of the largest members of the deer family. Males are powerful and—fully grown—weigh up to 1,000 pounds.[1] However, few southwest Colorado public lands elk hunters will ever encounter such a behemoth, for multiple reasons. 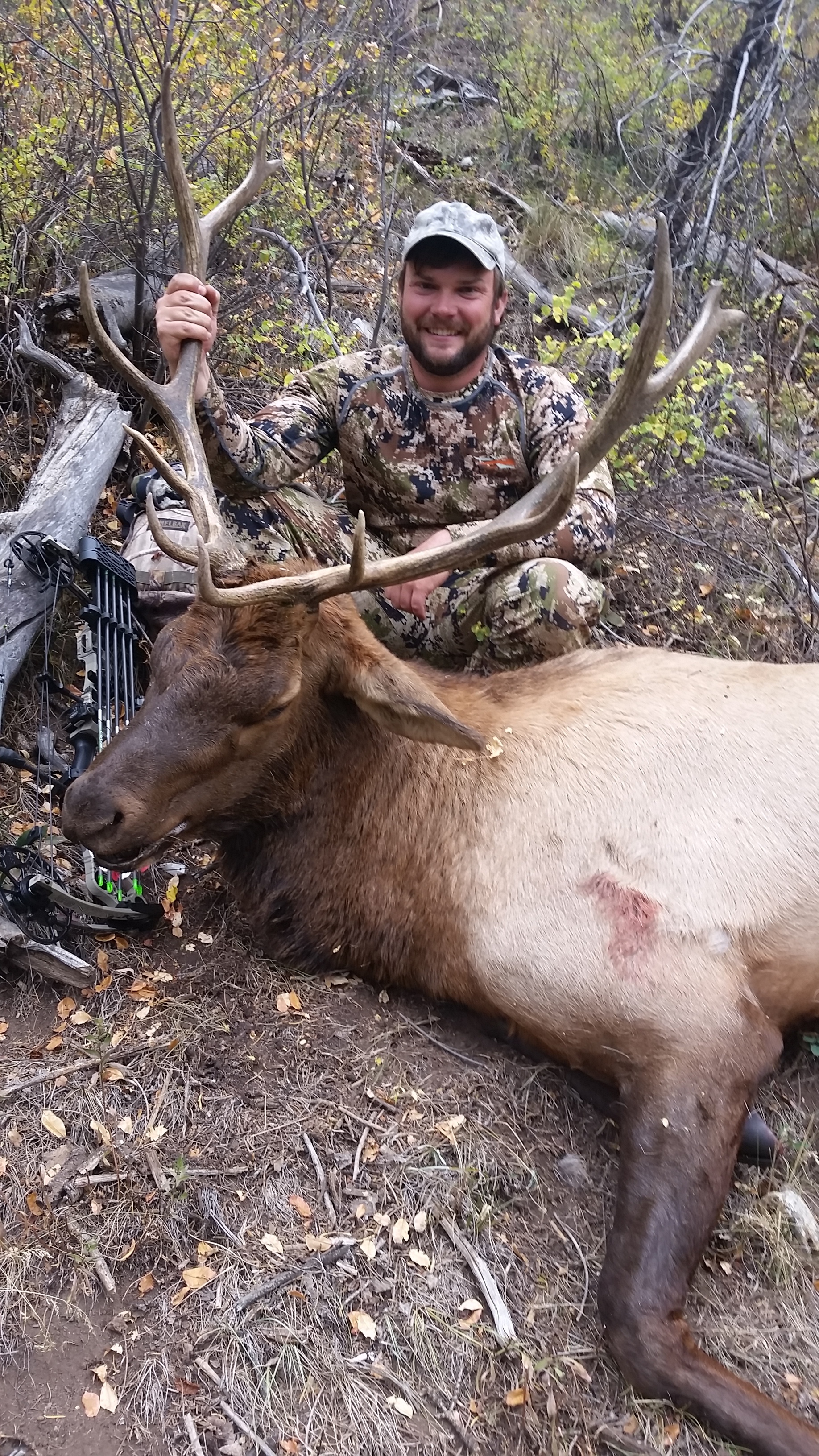 First, southwest Colorado’s San Juan Mountains may be one of the most rugged places to hunt elk in the country. The San Juans claim the title of Colorado’s largest mountain range and contain not only its largest wilderness area, the Weminuche (499,771 acres), but also thirteen peaks surpassing 14,000 feet (14ers) and more than six hundred peaks over 13,000 feet (13ers).[2]

In short, lots of vertical terrain and more land above 10,000 feet in elevation than any other mountainous region in the contiguous 48 states. This still wild swath of lung-busting country is nearly 90 miles long and 50 miles wide with 1.3 million acres of designated wilderness and roadless areas—one of the largest tracts of high elevation wildlands left in the United States.

Second, the San Juans include over-the-counter (OTC) game management units. In fact, Colorado is the only state that offers OTC rifle bull elk tags to both resident and non-resident hunters.[3] Given the elevated potential of running into other hunters, combined with intimidating terrain, many of us who hunt the San Juans tend to be driven by more than just putting meat in the freezer.

It’s (in part) because of these difficulties that I’ve opted to hunt the San Juans for some fifteen years now. As explained by Colorado Backcountry Hunters & Anglers (BHA) founder David Petersen (in On The Wild Edge), the “Weminuche Wilderness (say, Women-ooch, named for a local band of Ute Indians), [is] the largest … public commons in Colorado.”[4] 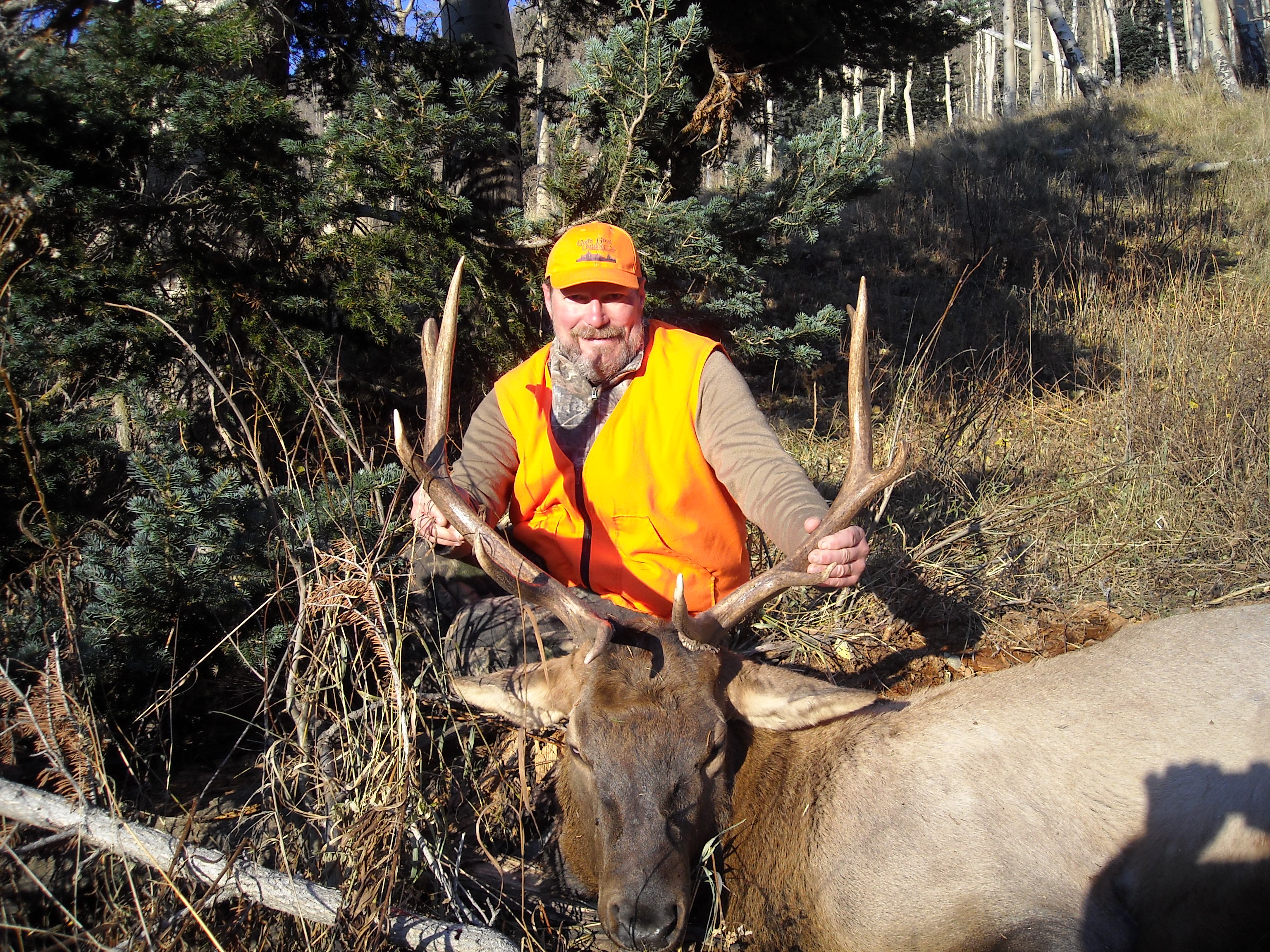 To the Utes, the San Juan Mountains are “the Shining Mountains,” a name certainly befitting this sprawling swath of wildlands where as recently as 1979 at least one grizzly bear still roamed.[5] In his classic book Ghost Grizzlies David Petersen said, “The San Juan Mountains … comprise some of the richest grizzly habitat in all of North America.”

The San Juans formed starting some 40 million years ago, rising from the ashes of volcanic eruptions. With interconnected subranges jutting precipitously from a collapsed volcanic caldera, the San Juans offer “sea-of-peaks” views uncommon in the lower 48 states. As the youngest and most jagged range in the state, it’s easy to see why stalking the San Juans may not be a desirable option for many elk hunters.[6]

While in camp one evening, a group of three first-time elk hunters in their twenties from Michigan invited me over to their campsite for dinner. After explaining that they had not seen or heard any elk so far (like me), I said, as a compliment to their tenacity, “This may be one of the toughest elk hunts in the country.”

A second rifle season (Oct. 30 – Nov. 7) OTC bull tag in southwest Colorado’s San Juans is not a high odds bet for filling your freezer. These elk have already survived being pursued by a combination of bow and muzzleloader hunters during the entire month September and rifle hunters during first rifle season (Oct. 16 – 20). Hence, if you have grandiose visions of B&C trophy bulls clouding your mind you may want to reevaluate. 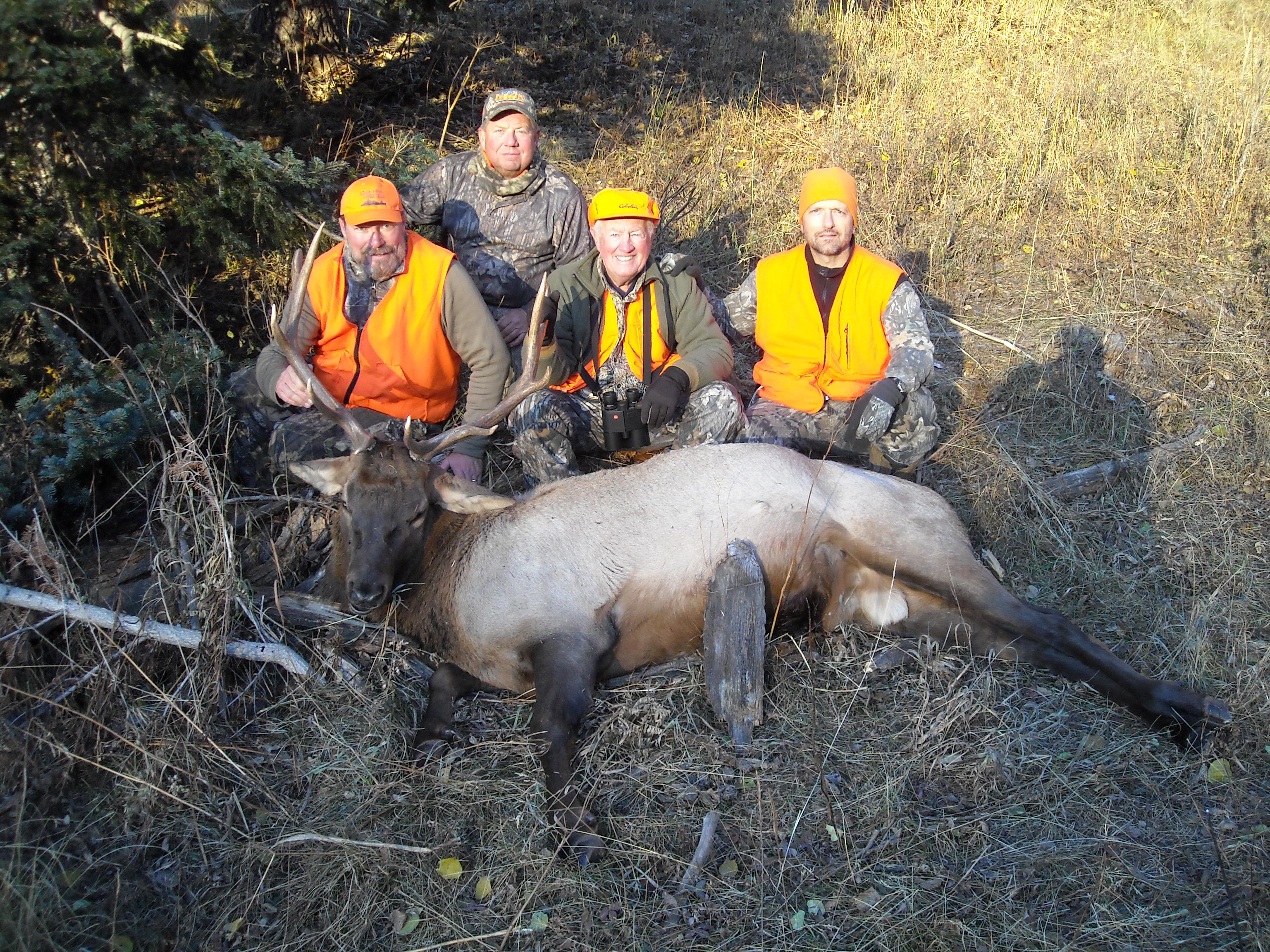 “You’ll quickly discover that any public land OTC bull is a trophy,” wrote Field & Stream contributor Jace Bauserman (in “Hunting Public Land Elk? Forget 300-Inch Bulls and Just Have Fun,” 9/17/21). “Lots of hunters head West each year and never see or hear bull. I don’t say this to discourage you, but to prepare you. These bulls are tough customers. They encounter lots of hunters and hear good, bad, and horrendous calling from opening day through season’s end. The upside is that chasing pressured bulls makes you a better elk hunter, which should be the goal.”[7]

In his book Racks, David Petersen explains that, “An average mature bull will have six points total, a main-beam length around 48 inches, an inside spread of 30 inches or less and a Boone & Crockett total score in the neighborhood of 260 to 290.”[8] But keep in mind that of all the elk killed in a given year, only a small percentage are 6-point or better, and that includes a lot of “dink, willow 6-pointers,” says American Hunter contributor Dave Campbell.[9] Takeaway: consider shooting the first legal bull you encounter, assuming you get such an opportunity.

Learn How To Suffer

For those still contemplating hunting places like the San Juans, carefully consider your fitness level and ability to hike high and far before venturing into this intimidating realm. Having a mountaineering background (I refer to elk hunting as “mountaineering with a gun”) is an advantage. Thanks to some high-altitude climbing experiences, I’ve learned a few helpful techniques.[10]

The science of speed hiking indicates a slope of ten degrees (an elevation gain of about 900 feet per mile) maximizes a person’s ability to gain both elevation and distance. A 20-degree slope (1,800 feet elevation gain per mile) dramatically increases physical effort to both ascend and descend and renders travel much less efficient. One research project indicated the energy savings on the descent of a 20-degree slope is only about 25% over the ascent.[11]

In the San Juans you’re sure to encounter slopes well in excess of 20 degrees. In other words, you gotta embrace your inner-Sherpa. One way to step up is the “rest step.” On steep terrain, with each step lock your back knee and rest your weight on that leg, momentarily, before the next step. When your knee is locked, skeletal structure takes the weight off your muscles, saving energy.

Because negotiating mountainous terrain littered with blowdown and other obstacles can be physically and mentally painful, consider practicing another technique, which I call “learning how to suffer.” My Colorado adventure racer friend, Marshall Ulrich, is also a best-selling author (Running on Empty and Both Feet on the Ground) and has summited Mount Everest, among many other sky-scraping peaks.[12]

“One way to deal with pain is to embrace it, to realize that it also presents a gift: profound appreciation for whatever small thing comforts me, brings me pleasure, make me laugh, satisfies my hunger, lightens my mood … if something hurts, I focus on what doesn’t,” Marshall wrote in Running on Empty. “The mind will naturally fixate on any irritation, but you can redirect it, make yourself look away or at least occupy yourself with something else for a while.”[13]

As explained by Outdoor News contributor Tory J. Petersen (in “Mountain medicine,” 9/16/16), “Elk hunting is a physically and mentally grueling endeavor, but is also worth every second for nothing other than the clarity it can provide in your life.”[14] For a combined dose of clarity and reality consider the following stats from my 2021 San Juans elk hunt, which weren’t unusual based on conversations with other hunters in the area.

During six days of hunting, including some 50 hours of “armed hiking,” I covered over 50 miles through 14,700-plus feet of elevation gain without hearing or seeing a single elk and encountered very little fresh sign. Some of my elk hunting friends who live locally reported similar results. It wasn’t the first and won’t be my last tough season.

That said, during 2020 in the same region I encountered a herd of 30 or so elk (after 24 miles of armed hiking), including multiple bugling bulls, and managed to put one down, which then required 27 miles of grueling pack out hiking.[15] A heavy dose of reality for those considering an OTC San Juans bull tag.

To kill a bull elk here, you need to know yourself, how far you can reasonably hike and climb in a day and how much suffering you can endure.[16] One constant in the San Juans is the vertical nature of the terrain always giving elk a steep home field advantage. To level the playing field, you’ll need to rely on skill and experience combined with some suffering and luck.

David Lien is a former Air Force officer and co-chairman of the Colorado Backcountry Hunters & Anglers. He’s the author of “Hunting for Experience: Tales of Hunting & Habitat Conservation.”[17] During 2014 David was recognized by Field & Stream as a “Hero of Conservation”[18] and in 2019 he was the recipient of BHA’s Mike Beagle-Chairman’s Award “for outstanding effort on behalf of Backcountry Hunters & Anglers.”[19]

[12] https://www.marshallulrich.com/index.html: “The ultimate endurance athlete, Marshall Ulrich has run more than 130 ultramarathons averaging over 125 miles each, competed in 17 expedition-length adventure races, and climbed the Seven Summits all on his first attempts.”