For the Love of the Dog

Nearly every hunter has a different answer when asked why they hunt. Some do it mostly for the reward of meat, others for friendships and camaraderie, and others still ... for the love of the dog. Then, there are some dogs that come into a hunter’s life and completely change their “why.” 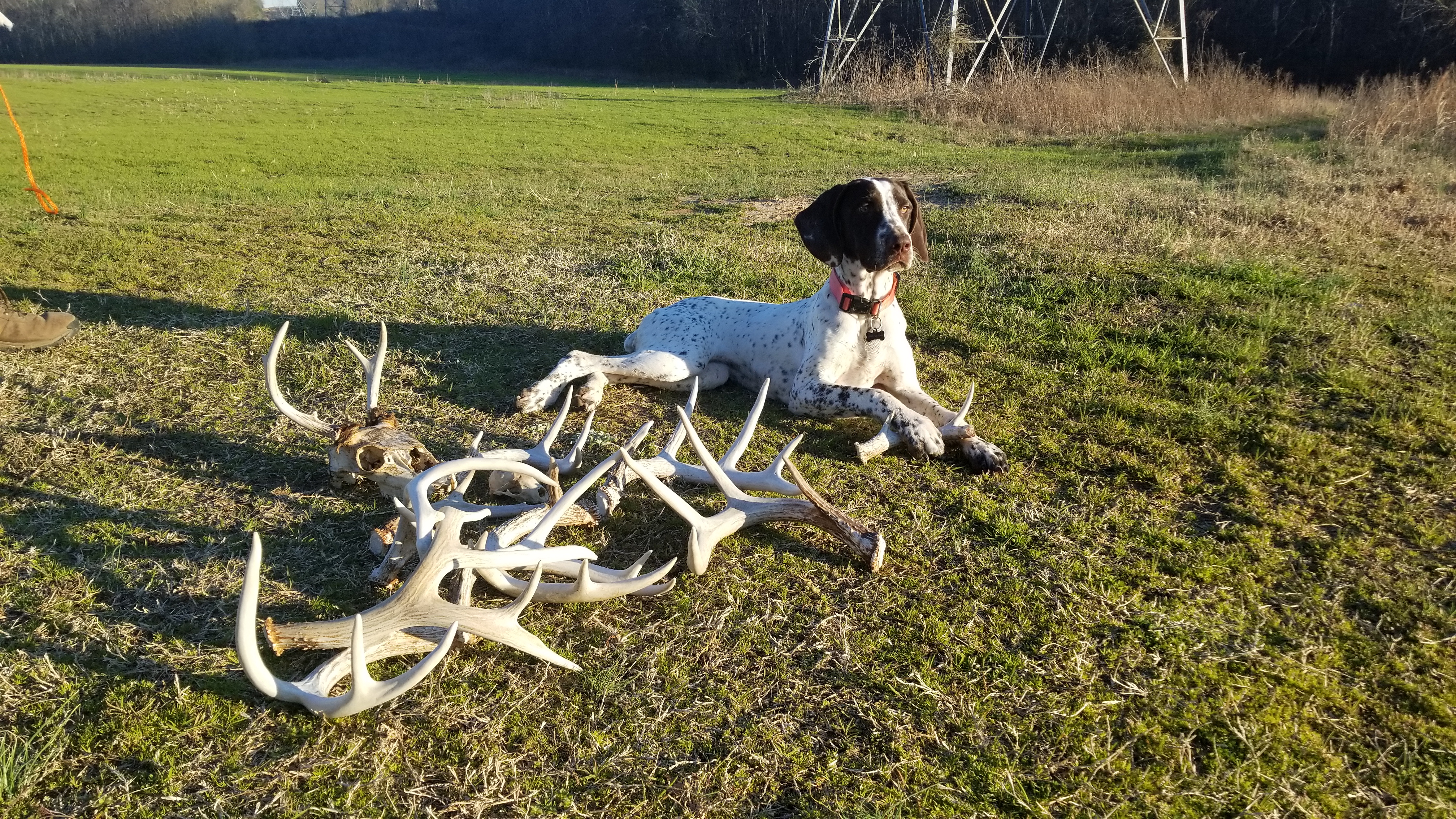 This is about one of those special dogs. As college students, my wife and I couldn’t afford professional training, so we bought and read books, took advice when we could and tried to spend as much time on it as we could manage. We’ve made a lot of mistakes along the way, but Pearl’s been forgiving. She will do anything to make us happy – and she is simply a natural.

The first time I recognized this was when Pearl was only 6 months old. One day in early March, I decided to take her out to look for shed antlers. Mostly, I wanted to let her get her energy out and run around. For those who have owned a German shorthaired pointer, you get it.

As a puppy, one of the early games I played with her was to hide something and command her to “find it.” Out of curiosity, I took an old deer skull with me. When we arrived, I let her smell it then made my command... as if I flipped a switch, off she went. The day’s tally: three dead deer, a raccoon skull and over a dozen sheds.

Pearl’s first duck hunt – just me and her – took place on the edge of a narrow wetland. Hopes of near-passing wood ducks were on my mind. As I coaxed her out from under the covers (yeah, she’s a cuddler and a giant house baby) on the crisp, frosty morning – cold for a German shorthair – I thought, “Oh, I hope she doesn’t hate me for this.” 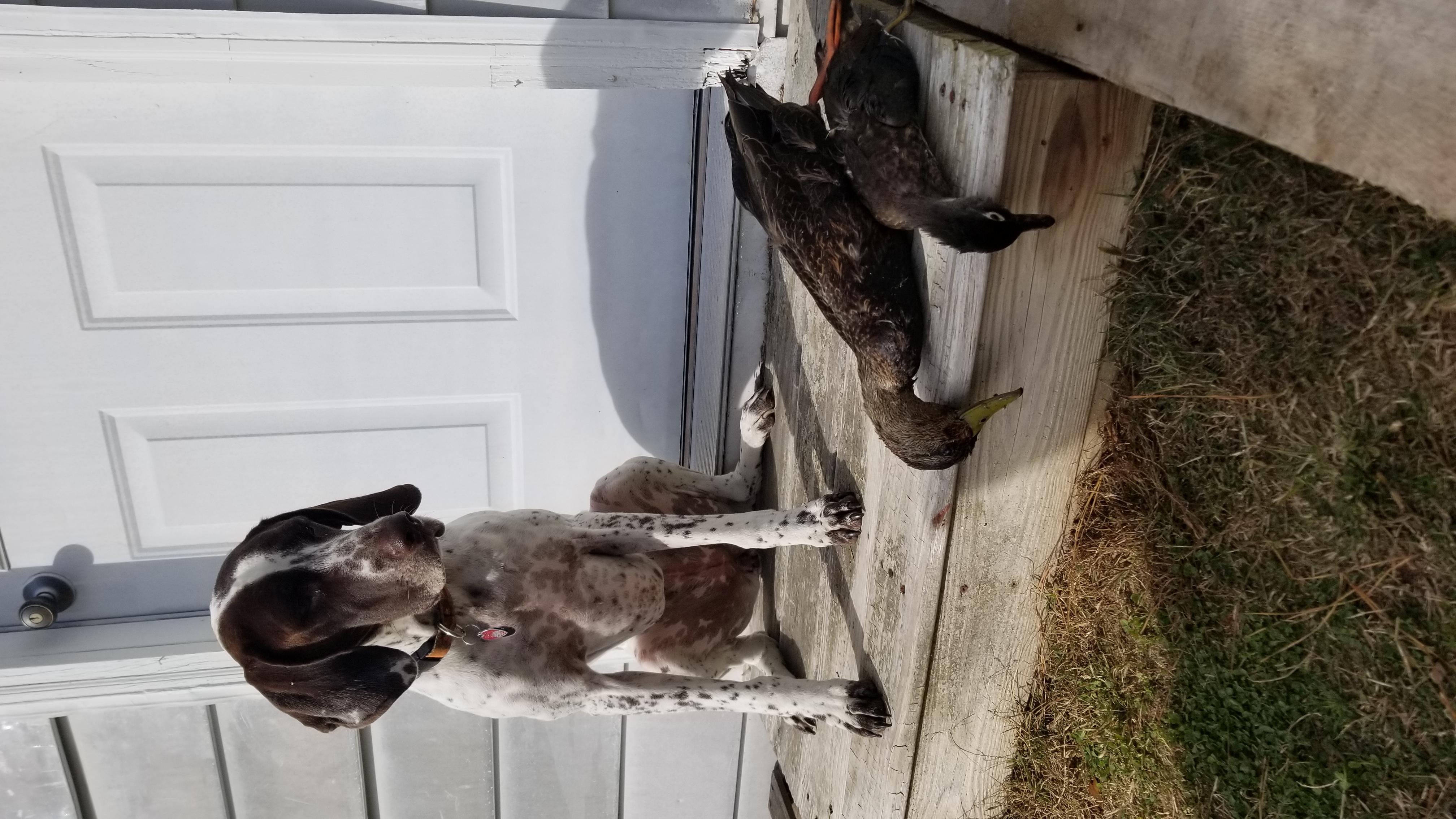 Initially skeptical, but on an adventure with Dad, her apprehension quickly turned to palpable excitement. She waded into the hip-deep mud and muck without hesitation. I tossed a few decoys out.

At shooting light, I let out a few speculative quacks, and Pearl, except for some occasional teeth rattling, was completely silent and still leaning against my legs. A few moments passed and I caught the glimpse of a large bird over the treetops. “Crow?” It dropped below the tree line and splashed into the water in front of me. “A duck? That big? Here?”

She tried. I encouraged her, I threw sticks, I cheered her on. She brought me decoys and sticks, and more decoys, and that other decoy again. You get the picture. She whined in frustration, and I understood. We were at an impasse, and, at risk of turning her great morning into a bad one, I gave her praise and we hiked back. She’d done everything I asked her to do, and she did her best. I knew she was not there for the ducks. She was there for me.

I called around until I found a kayak, picked up the bird before the eagles, and downed a wood duck on the way. On my way home, I replayed the morning in my mind several times. Before I knew it, I was thinking about the next day and next adventure we could have together. More duck hunts, introducing her to woodcock and eagerly awaiting sheds to drop.

I’ve heard special dogs come into one’s life and completely change why and how they enjoy the outdoors. That duck hunt with Pearl wasn’t a day of limits, or a day with old two-legged friends, but a day that will be forever a memory with one of those special dogs.

Beau Badon is a Ph.D. student in conservation agriculture at Virginia Tech, where he is working with BHA’s capital chapter to establish collegiate programs. He has been president of the Mississippi State University BHA club, Southeast chapter collegiate program liaison and on the advisory board of the collegiate program.

This article first appeared in the Summer 22 issue of Backcountry Journal. Join BHA to get 4 issues a year right in your mailbox.