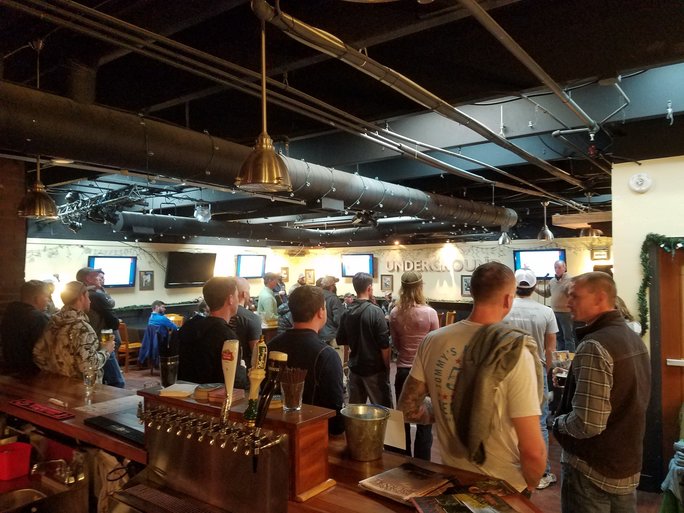 The Colorado chapter of Backcountry Hunters & Anglers (BHA) started off 2018 with a bang, including three public lands Pint Nights during January and early February:

Pint Nights are a time for BHA members and the general public to hear about BHA’s boots-on-the-ground mission and vision for preserving and protecting our nation’s great public lands estate and hunting/angling heritage, while also enjoying some excellent beer. “What a great crowd at the New Belgium Brewing Fort Collins Pint Night,” Russ Bassett, Colorado BHA Front Range Sponsor/Events Coordinator, said. “About 80 folks and 30 memberships. Thanks to everyone who came out!”

In the words of Durango Pint Night organizer, Cody Jones: “We had a great turnout and a great night of public lands conversation … A special thanks to Dan Parkinson and Cody Doig for their talks on Bighorn sheep and NEPA respectively. Also to Ben Sorensen for moving some merch for us … And of course, a big thank you to all of you who were able to attend and contribute to the conversation!”

“Dan … I really appreciate the scientific approach you took and it provided a great opportunity to emphasize BHA’s science based perspective,” Cody Jones said. “After talking with multiple people afterwards … I think the wheels are turning and momentum is building. We should have a good number of volunteers whenever you are ready for the next step in this monumental task!”

The Hotchkiss Pint Night was the icing on the cake. “We had a pretty darn successful pint night in Hotchkiss … geared towards folks living in our North Fork Valley, the towns of Hotchkiss and Paonia,” Adam Gall said. “Around 40 people showed up … an impressive number for such small towns! It was a good showing and had some focused and positive public lands discussions.”

“The energy that’s continuing to build around BHA’s efforts to protect and perpetuate our great public lands estate and hunting-angling heritage is undeniable,” chapter chairman, David Lien (a U.S. Air Force veteran), said. “The hunters and anglers and others who joined us in Fort Collins, Durango and Hotchkiss are the heart and soul, the boots-on-the-ground that make it all possible!” BHA president and CEO, Land Tawney, noted: “Our secret sauce. You all know what that is … it’s our unwavering outspokenness for fish and wildlife and their habitat … period.”

Founded by a former U.S. Army field artillery officer, Mike Beagle, and formed around an Oregon campfire, in 2004, BHA is the sportsmen’s voice for our nation’s wild public lands, waters and wildlife. With over 17,000 members spread out across all 50 states and Canada—including chapters representing 35 states and Washington, D.C., and two international chapters, in Alberta and British Columbia—BHA brings an authentic, informed, boots-on-the-ground voice to the conservation of public lands. Since the Colorado BHA chapter was founded by David Petersen (a U.S. Marine Corps veteran) in 2005 (the first official BHA chapter), they’ve grown their boots-on-the-ground presence to over 1,200 dedicated hunters and anglers.