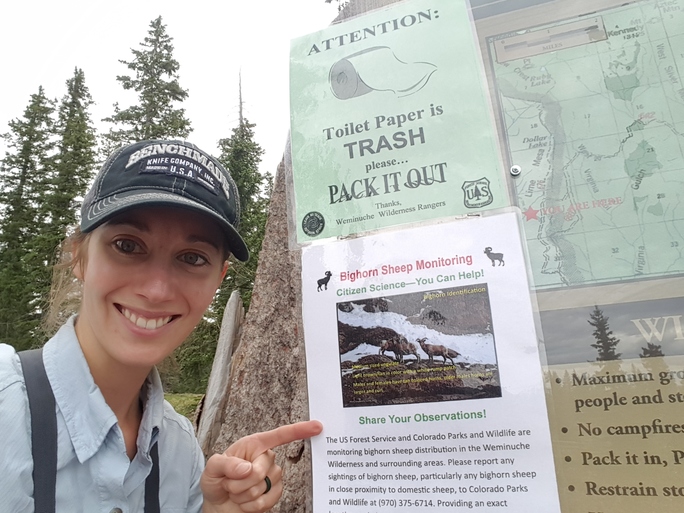 Colorado Backcountry Hunters & Anglers (BHA) members are privileged to hunt, fish and otherwise recreate on public lands in southwest Colorado’s San Juan Mountains, often in the Weminuche Wilderness area, some of the highest, wildest public lands habitat in the country. During the summer of 2017 Colorado BHA Southwest Regional Director, Dan Parkinson (a Doctor of Veterinary Medicine), initiated a Volunteer Signage and Bighorn Observation Program on the Weminuche Wilderness landscape.[1]

Weminuche bighorn sheep are listed by the U.S. Forest Service as a sensitive species, meaning there is concern for their long-term viability. The Weminuche bighorn population includes about 425 animals and is designated as a highly valued “Tier 1” population because it is believed to be one of only three herds statewide that have received little or no augmentation. That means these are true native bighorns and, as such, they represent an important historic gene pool for the San Juan Mountains and state.[2]

Domestic sheep carry strains of pneumonia that are devastating for bighorn sheep. According to a joint issue statement of The Wildlife Society and the American Association of Wildlife Veterinarians (released in March 2015): “It is now apparent that disease transmission from domestic sheep to wild sheep is a significant risk factor for the conservation and restoration of wild sheep populations” and “effective separation of domestic sheep from wild sheep is the only currently available management solution for preventing or minimizing disease transmission.”[3]

Terribly, a single outbreak can kill most bighorn sheep in a herd. In addition, according to Colorado Parks & Wildlife research published in the Journal of Wildlife Diseases, significant lamb mortality can occur for many years in a herd following a single exposure.[4] A 2008 study by Colorado Division of Wildlife showed that a single domestic sheep that wandered onto bighorn winter range caused a die-off of more than 86 bighorns from 1997-2000.[5]

The closure of domestic sheep grazing allotments has been used in other states as an effective management tool to protect and promote viable bighorn populations. In March 2016, the 9th U.S. Circuit Court of Appeals upheld a 2010 Payette National Forest decision to phase out active sheep grazing permits.[6] The National Wildlife Federation (NWF) in concert with NWF affiliate, the Colorado Wildlife Federation, has identified more than 90 federal domestic sheep grazing allotments that overlap with bighorn sheep habitat and pose a significant risk to Colorado’s wild sheep.[7]

As explained by Dan Parkinson: “Our goal in launching this [Bighorn Observation] program was to raise awareness of the historic and actual presence of bighorns in the Weminuche. We wanted to get BHA members and other interested individuals out on the landscape looking for bighorns that may be wandering in or near active domestic sheep grazing allotments. To that end, we had three BHA volunteers assist the Forest Service in posting bighorn observation signage at trailheads going into the Weminuche.”

“Additionally, we had a dozen volunteers, working individually or in groups of two or three, looking for bighorns in or near active domestic sheep allotments for a total of about 25 days, some of which were overlapping,” Dan said. “Volunteers who were hiking or backpacking in the wilderness spent an hour or several hours a day actively looking for bighorns. Reports from the volunteers were filled with enthusiasm for the program. Many asked ‘Why aren’t there more bighorns in that big, wild habitat?’ That’s exactly the question we want them to ask!”

“In our first-year effort we found significant interest by sportsmen and other wildlands users in the long-term viability of bighorns in the Weminuche,” Dan added. “However, most of the sportsmen and volunteers we contacted had only limited understanding of the threat that bighorns face from exposure to domestic sheep grazing on their historic home range. Public education is critical moving forward.”

Colorado BHA Bighorn Observation Program plans for 2018 include assisting the Forest Service with more signage, a greatly expanded “boots-on-the-ground” volunteer observer effort, and a seminar to be held in Durango in the spring on Weminuche bighorns and the risks posed to them by domestic sheep grazing on their historic summer home range.

“We hope to increase public awareness of this issue and encourage the public to get involved,” Dan explained. “We plan to have a more coordinated volunteer program whereby observers will cover a larger part of the landscape over a greater period of time. In addition, we are very excited that a newly developed citizen science smart phone app for bighorns will be available for use by volunteers to help accurately record their observations. We plan to introduce the app to volunteers at the spring seminar.”

Colorado BHA members look forward to working with the Rocky Mountain Bighorn Society, Fort Lewis College students and other wildlands advocacy groups to expand this program during 2018. Colorado BHA chapter chair, David Lien, said: “BHA is committed to helping protect Colorado’s bighorn sheep from the threats posed by domestic sheep grazing. We’re lucky to have chapter leaders, like Dan, who routinely take the initiative to protect our wild public lands, waters  and wildlife—and hunting and angling heritage—from this and similar threats.” For additional information, or to volunteer, contact Dan Parkinson at [email protected].

About Colorado BHA
share on
See other posts related to Colorado Issues Colorado BHA Issues & News
Get the latest news and stories, right to your inbox.
Search
Local Chapters