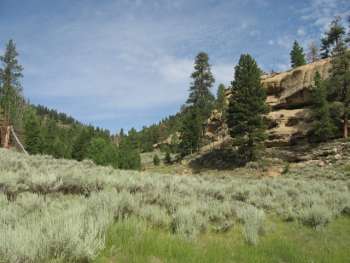 Most of us, as we get older, become more resistant to change.  That is especially true when it comes to seeing changes to the hunting and fishing places we treasure.  Seldom do changes to our favorite places seem to be an improvement.  Think about it--how many places do you know where hunting or fishing is better now than it was 25 or more years ago?

Changes that impact wildlife habitat tend to occur gradually--a few houses, or another road, or maybe we notice more and more oil well pump jacks, until finally we are left to look back and wonder, “What happened to all the game we used to see around here?”

The Act requires that various types of impacts, positive and negative, to both the natural and human environment be considered.  Some people think that environmental laws serve as protection against negative impacts, but that is not necessarily true.  The Act stipulates only that impacts be disclosed.  Decision-makers are free to make a choice of an alternative that has negative impacts, fully aware that such decisions may not be popular ones.

One of the purposes of the Act was to disclose impacts that occur from seemingly unrelated actions, or from separate phases of a project.  These are considered “cumulative” impacts.  Changes to wildlife habitat that occur slowly and gradually often fall into this category.

Habitat impacts can happen quickly, too.  But except in unusually catastrophic cases such as fires or floods, large scale impacts seldom occur in such dramatic fashion.

The effects of some decisions are predictable, however.   These are considered “foreseeable” impacts as opposed to the unintended consequences that any particular action or decision might have.

Some impacts, even though they might be foreseeable, can still remain ignored or overlooked.   A BLM decision to lease remote, difficult-to-access land parcels for oil and gas development in a known mule deer wintering area should have foreseeable impacts disclosed in a NEPA analysis.  Yet the consequences of opening formerly inaccessible parcels to motorized vehicles could leave trophy bucks vulnerable to poaching on their once-secure winter habitat.  Such impacts are not generally disclosed since poaching is considered a random, illegal activity by the BLM.

Even though most foreseeable impacts to wildlife and their habitat are disclosed, others may be overlooked.   For example, the high quality hunting opportunities that the Book Cliffs Roadless Area have offered for many years will foreseeably be lost as oil and gas development inevitably fragment the habitat that supports the rich wildlife populations.  An unintended consequence is that the hunters who hoped to draw permits to hunt the Roadless Area sometime in their lifetimes will likely be displaced to other areas.  Hunters who may have never anticipated hunting the Book Cliffs may still be affected as their own hunting opportunities are impacted by an increasing number of hunters.

While the NEPA process is intended to disclose impacts and lead to better decisions, the Act does not apply to non-federal lands.  That is why Grand Count’s proposal to have federal lands transferred to the state of Utah for a one to two mile-wide utility corridor into the Roadless Area of the Book Cliffs is especially troublesome.  We don’t have to guess at the consequences of that deliberate move on Grand County’s part—habitat destruction and fragmentation will occur, wildlife displaced and seasonal movements will be impeded.   Big game animals will be road-killed by oil field traffic.  Those are the foreseeable impacts that would be disclosed under NEPA.  The cumulative effects would include accelerated industrialization of the Book Cliffs Roadless Area, the loss of a special wildlife area and the quality hunting experience it now affords some lucky hunters each year.

Spending time in the outdoors, sportsmen are typically the first to notice changes that begin to negatively affect wildlife and the habitat they require.  Our “boots on the ground” presence helps ensure that wildlife and wild lands have advocates for their protection.   We can make sure that decision-makers are aware that such places are important to us.  Unfortunately, we can’t compel them to make decisions that are beneficial to wildlife and future generations of hunters.

But we can sure as heck vote for new decision-makers.

About Caitlin Thompson
share on
See other posts related to Utah BHA
Get the latest news and stories, right to your inbox.
Search
Local Chapters