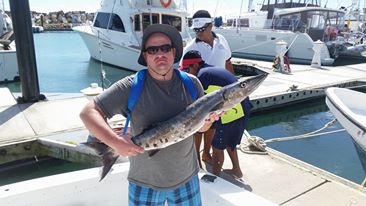 John is a Colorado native. He was born in Longmont and raised in Lyons, a town his family helped found. Today John lives in Edwards, and fishes “for anything that will strike.” He started fishing as soon as he could walk (mentored by his dad and uncles), mainly for trout, but would go after whatever was biting. John says: “My father loves to fish, so if we heard of an area close that was hot, we’d try it out.” John started hunting at age 12, going after rabbits, and shot his first deer at 13 above Lyons with a borrowed 7mm, which he still has/owns.

“I hunt small game, but my favorite is still rabbit. I also hunt for deer and elk,” he adds. In addition to his 7mm, John also goes afield with a 12 gauge Mossberg 500. He joined BHA after “searching the web trying to find like-minded organizations that I could support.” Colorado BHA chairman, David Lien, says: “We’re lucky to have dedicated hunter-anglers like John supporting BHA. His boots-on-the-ground public lands and waters knowledge combined with an innate enthusiasm for hunting, fishing and protecting our great public lands estate is a rare combination. We need many more like him!”