The Wyoming Chapter of Backcountry Hunters & Anglers saw a new development recently in a longstanding struggle over public lands with a Casper-area landowner. Richard Bonander, president of Inter-Mountain Pipe & Threading Co., pled guilty in October to a misdemeanor charge stemming from the unlicensed construction of roads on U.S. Forest Service, Bureau of Land Management, and state trust lands in the Medicine Bow-Routt National Forest. In addition to bulldozing several miles of road, Bonander also leveled out areas near elk wallows for hunting blinds.

Two local hunters, both members of the Wyoming chapter of BHA, initially reported the violation in the summer of 2018 after discovering the illegally constructed roads behind the Bonander ranch. The chapter received pictures of the illegal activity and started making contact with the local U.S. Forest Service and BLM offices, and the Wyoming Office of State Lands and Investments shortly after. An extensive investigation followed, with chapter leadership providing evidence and testimony. As a result, Bonander must pay over $49,000 in fines and restitution.

This is not the first time the Wyoming chapter has had to step up in response to Bonander; in 2016, it was chapter members who led opposition to his proposal to exchange 295 acres of his land for 1,040 acres of state land. After noticing the clearly disproportionate exchange on the Wyoming Office of State Lands and Investments site, a member did further research and discovered that the exchange would shut down public access to over 4,200 acres of prime elk habitat. Subsequently, the proposal was unanimously voted down by the board that oversees the exchange process.

The Wyoming chapter of BHA thanks the agencies involved for standing up for secure big game habitat and protecting our public lands and encourages hunters, anglers and other outdoor users to report illegal degradation on public lands to land management agencies, game wardens or the chapter. Citizens who report illegal OHV use on public lands are eligible for a reward up to $500 through BHA’s OHV reward program. 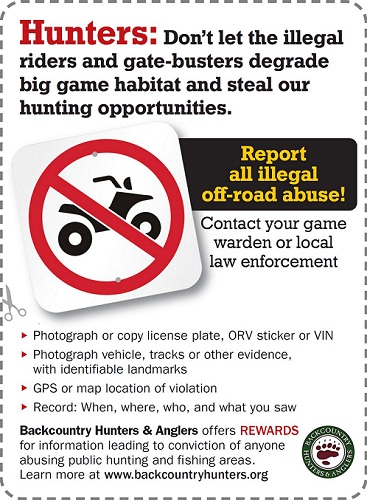 About Wyoming BHA
share on
See other posts related to Wyoming BHA Wyoming Issues wyoming news
Get the latest news and stories, right to your inbox.
Search
Local Chapters