On a bone-biting cold March 7, turkey hunting seemed like it was eons away.  I drove to the Hubbardton Battlefield, a stunning series of meadows that stare directly down the Taconics chain, creating a beautiful mountainous panorama.  I passed frozen lakes still dotted with ice shanties, wondering who I might meet and if I had remembered my Felco nippers.This was the first official event for the Castleton University Chapter of the BHA, in partnership with NWTF.  When I arrived a small crowd had already gathered. I chuckled to myself as got out of my truck; I heard jestful arguments in regard to the merits of chainsaw brands and the soft clucking of what I knew was a diaphragm call.

The Hubbardton Battlefield is the sight of the only battle fought on Vermont soil in the Revolutionary War.  It had been a bloody affair where although colonial forces were defeated by Johnny Burgoyne's campaign and Hessian soldiers of fortune, its events were the set up for a  resounding British defeat in Saratoga shortly thereafter.  The battlefield and its surrounding hills became farms and homesteads early in our nation's history, here the obvious beauty and fertile land stand out.  Somewhat strangely, not much has changed!  The fields are more grown up and there is less livestock dotting the hill sides. It was to one of these long abandoned homesteads that we were headed.

Adjacent to the battlefield, the State of Vermont manages approximately 250 acres as a Wildlife Management Area.  It is prime turkey habitat with a species forest matrix of mature nut-bearing species and fallow apple trees.  These apple trees are ancient, bearing heritage strains of long-forgotten fruit. Twisted relics of a different time, the trees stand as guardians of the overgrown stone foundations that can be found near them and are just as old.  It was one of these orchards that drew us in.

Joel Fleweling, a VTFW biologist, along with his young daughter, led us into the forest with seven members of the NWTF, four members of the newly minted Castleton University BHA chapter, and six BHA members from Saint Michael's College in Burlington Vermont.  Chainsaws ripped through underbrush that choked out apple trees, making short work of invasive honeysuckle and buckthorn.  Native trees like shad and ironwood were thinned but largely spared.  New brush piles were built providing cover for cottontails and ruffed grouse.  More technical pruning work had participants in tree tops feathering the layers of apple tree branches and establishing leaders in order to aid in the development of more fruit arriving next fall.

This work party spanned generations, seasoned sportsmen with years of experience, advice and stories paired with younger folks full of energy, agility and big dreams.  As our work came to an end, I pulled my hat on a little tighter to block the wind with a smile and could not help but think that turkey hunting did not feel that far off after all. This land was going to bear more stories as the result of a conservation initiative motivated by not only differing groups but also differing generations! 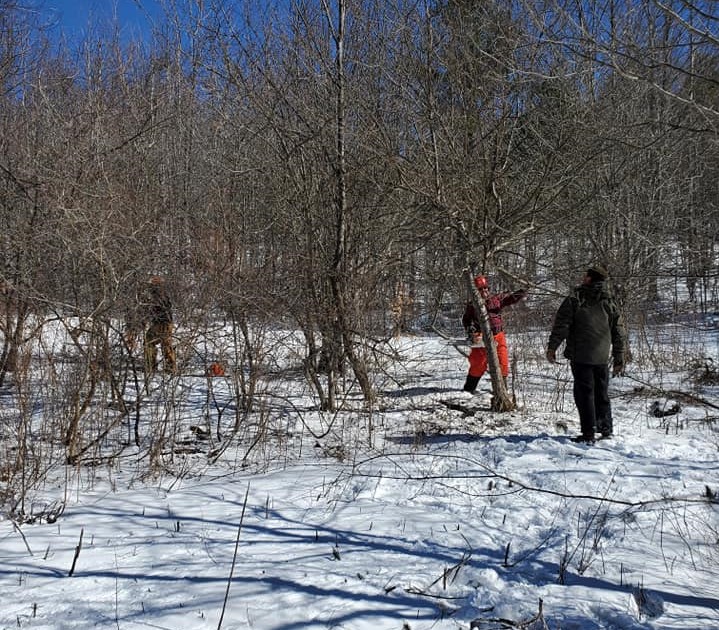 share on
See other posts related to New England BHA new england news
Get the latest news and stories, right to your inbox.
Search
Local Chapters