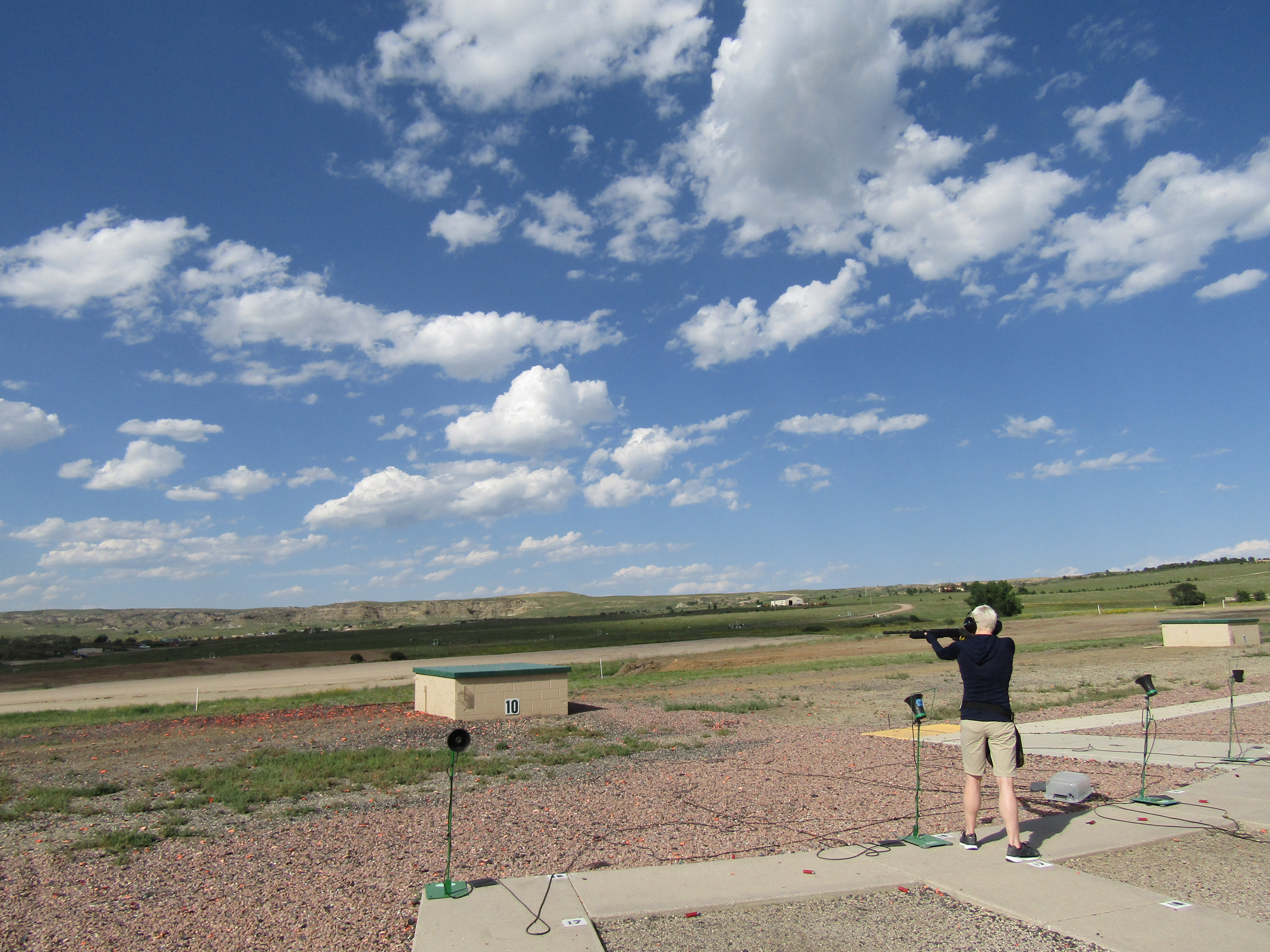 By mid-summer the exhilarating memories of hunting cagey mountain Merriam’s turkeys during April have started to fade and thoughts of fall hunts begin creeping into the psyche of hunters everywhere. One of the best ways to scratch that itch is to visit the local gun club or public range and start blowing the dust of latent shooting skills.

Shooting trap is perhaps one of the easiest ways for both experienced and novice upland game hunters (and others) to get back in the swing of swinging a shotgun. Clay targets are launched from a single machine. The targets usually move up and away from the shooter before gliding down to the ground. This is the simplest form of clay shooting and probably the best for working on basic shooting mechanics.[1]

My wife, Melinda, although she has been hunting sporadically for several years now, has not had enough range or field experience to become a proficient shotgunner. During September 2014 she completed the Colorado Parks & Wildlife (CPW) hunter education course. Since then she has been exposed to antelope, turkey, pheasant, grouse and geese hunting, but more time both at the range and in the field is a prerequisite for increasing her base level of hunting knowledge and skills. 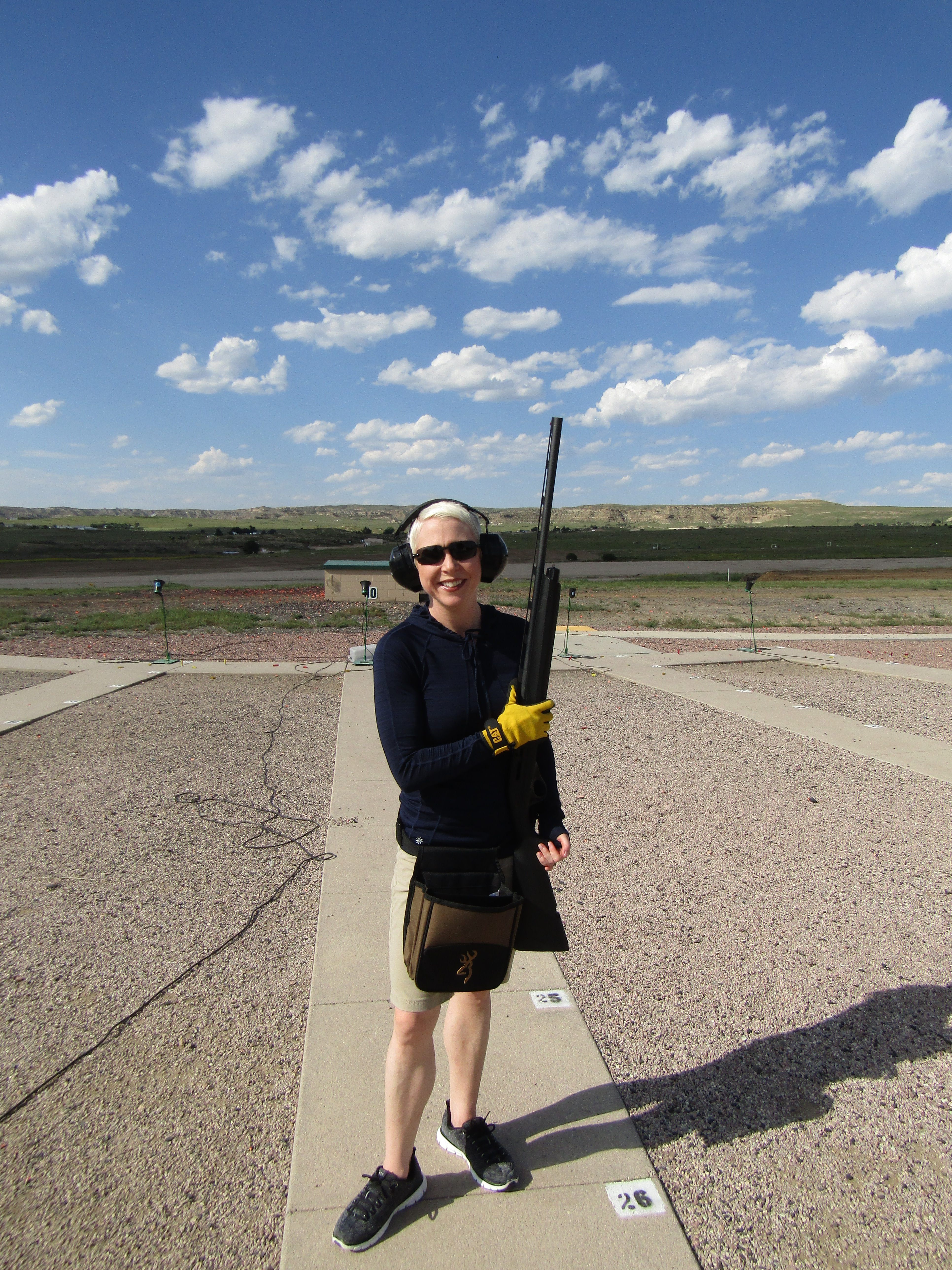 Gladly, Melinda is part of a larger trend of more women taking up hunting, as author (of Call of the Mild: Learning to Hunt My Own Dinner) Lily Raff McCaulou knows well. When Lily traded an indie film production career in New York for a reporting job in central Oregon, she never imagined that she’d find herself picking up a gun and learning to hunt. But her perspective shifted when she began spending weekends fly-fishing and weekdays interviewing hunters for her articles, realizing that many of them were more thoughtful about animals and the environment than she was.[2]

“To me, hunting my own meat feels like saying grace before a meal and really, for the first time in my life, meaning it,” says Lily. “It is only since I started killing my own dinner—watched it switch, in an instant, from living to dead—that I have felt truly grateful for a meal.”[3] And Lily knows that killing quickly (and, hence, ethically) requires practice. Consequently, she shoots clays to help sharpen her shotgunning skills, as explained in Call Of The Mild.

“There are several games of clay-pigeon shooting, including trap, sporting clays, five-stand and skeet. In each one, shooters move between stations and shoot ‘birds’—clay disks—that are flung from various positions. Trap is the simplest … Trapshooting first developed in England in the late 1700s, and involved shooting live pigeons as they were released from cages called traps. Today trapshooters take aim at standardized four- and five-sixteenth-inch disks, painted fluorescent colors and hurled at about forty-two miles per hour.”[4]

High School Clay Target Leagues are growing by leaps and bounds across the country. Although theColorado High School Clay Target League appears to still be in its infancy, in Minnesota, where I grew up and learned to hunt, the sport is growing exponentially. I suspect this is, in part, due to its affordability and convenience compared to other sports.

It costs about $210 for each student to participate in clay target shooting, said John Nelson, vice president of the Minnesota State High School Clay Target League. About $30 goes to the league, with the remainder for ammunition, targets and hearing and eye protection. Teams shoot at their own ranges each week and post scores online, so no travel is required except for the state championship. “It’s an affordable activity for families,” Nelson said.[5]

And it’s safe. “Through last year [2015], we had pulled the trigger 12 million times since 2001 with never a reported injury,” he adds. Just one factor is holding down growth in the sport. “We’re running out of gun clubs to shoot at,” Nelson said. “We’re turning away many kids each year.”[6] Given the growth trends, you can see why:

CPW is partnering with the National Shooting Sports Foundation (NSSF) to encourage participation in recreational sport shooting and emphasize firearms safety. It is designed for everyone from experienced competitors to hunters to those just becoming interested in acquiring a firearm and learning how to shoot.[9]

David Lien is a former Air Force officer and chairman of the Colorado Backcountry Hunters & Anglers. He’s the author of “Hunting for Experience: Tales of Hunting & Habitat Conservation” and during 2014 was recognized by Field & Stream as a “Hero of Conservation.”[11] Melinda Lien is a BHA Life Member.

About David Lien
share on
See other posts related to the campfire Colorado BHA Colorado News
Get the latest news and stories, right to your inbox.
Search
Local Chapters