Primary Zone is the heart of EPLUS action 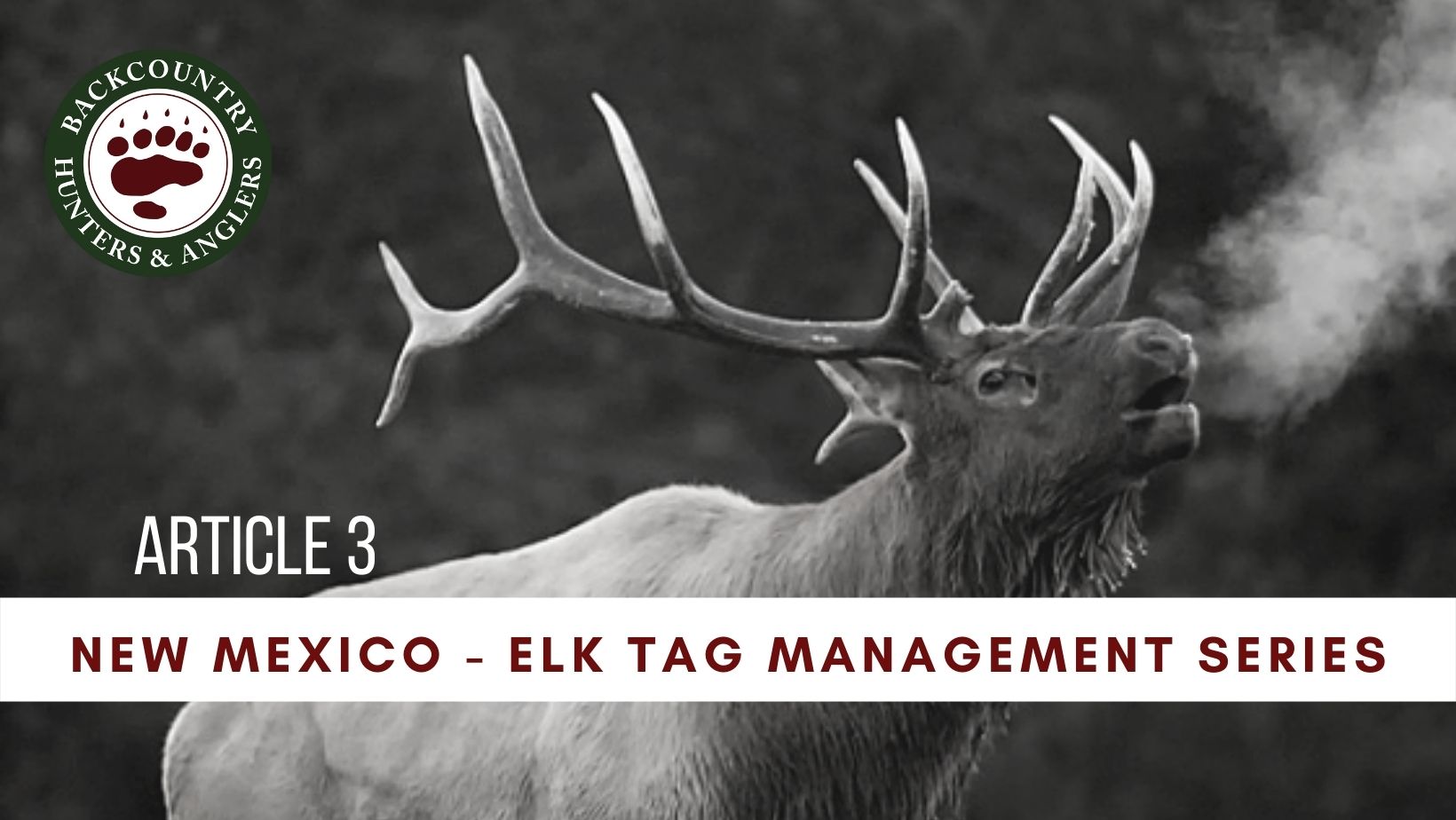 Third in a series

Almost every state in the West has a private land hunting program for elk – Arizona being the exception – but it’s hard to imagine any program more complicated than EPLUS.

We’ve posted a copy of the EPLUS Rule in our EPLUS Library, and we encourage hunters to read it just to see how difficult it is for the average person to understand. But to save your eyesight we’ll do a guided tour of the rule to explain how EPLUS works. Unfortunately, EPLUS is so complicated that even this explanation will be in two parts. This is Part One, and it’s a long one.

NMDGF has had several versions of its “private land” elk program over the years, but they have changed and evolved. The current program, known as the Elk Private Land Use System (EPLUS) was established in 2005. Like other big game rules, EPLUS typically gets reviewed every four years. It is due for another review in 2022.

The official objective of EPLUS is a mouthful: “Establish an equitable and flexible system that recognizes the contributions of private lands and landowners to the management of elk and their habitats, while providing hunting opportunities on private lands, and to support appropriate, biologically sound, and effective harvest goals set by the department for elk.”

Notice that it doesn't mention the use of “private land” tags on public land, but more about that later.

So how does NMDGF go from that one-sentence statement to doling out thousands of elk tags to a relatively small number of New Mexico landowners? Well, it’s complicated but it all starts with the big picture – where the elk are.

Since 2018, the Game Commission has divided New Mexico into three elk management zones – Primary, Secondary and Special. (For history buffs, in the past elk were considered either inside or outside the “core occupied elk range,” or COER.)

The Primary Management Zone (PMZ) is where the majority of elk reside – think mountainous terrain like our national forests. Roughly half of all elk harvested in New Mexico come from the Primary Zone, even though it is smaller in total size than the other two zones.

The Secondary Management Zone (SMZ) also has elk, but in smaller concentrations than the PMZ.

Technically, NMDGF does not give away actual elk tags. Instead, through EPLUS it gives landowners “authorizations,” which can be sold, bartered, used personally or not even used. A hunter who finally ends up with the authorization, no matter how it’s received, can then buy a tag from NMDGF.

Landowners in all three zones can participate in EPLUS, but the vast majority of authorizations go to ranches in the Primary Zone. A small number are allocated to the Special Zone. All private land elk licenses in the Secondary Zone are sold over the counter – another change adopted in 2018.

For a ranch to receive EPLUS tags in the Primary Zone, it must first demonstrate that it has “regular elk use” and “provide meaningful benefits to elk.” Prior to the 2018 revisions, NMDGF staff would decide whether a ranch qualified for EPLUS and how many tags it would receive without any standardized approach. That system was widely criticized and often abused, so in 2018 the Game Commission adopted a more scientifically based rubric – a move that NM BHA supported.

Under the new method, each ranch that applies for EPLUS is graded on five benchmark criteria -- forage, water, cover, agriculture, and human activity in the surrounding area. The ranch can earn from zero to two points for each benchmark, so a ranch could score from zero to 10 points. It must score at least 6 points to be eligible for EPLUS.

The stricter guidelines achieved their goal – NMDGF removed roughly 700 ranches from EPLUS for not providing enough benefit to elk. However, any tags that had previously gone to undeserving ranches were simply transferred to different ranches within EPLUS. As a result, many ranches received more landowner tags than before.

(Ranches that don’t qualify for EPLUS under the new grading system, however, can join forces with others to create co-ops in order to meet the minimum requirements and qualify for tags. More about this in the next installment.)

NOT ALL RANCHES CREATED EQUAL

To illustrate how EPLUS works in the PMZ, let’s imagine that the Bar X Ranch has 3,000 acres of deeded land in GMU 15, in the Gila region and the heart of the Primary Zone. According to the owner, elk are continually present, so NMDGF assigns that ranch an Elk Contribution Rating of 1.5.

To determine how many authorizations the Bar X Ranch will receive, multiply its deeded acreage (3,000) times its Elk Contribution Rating (1.5), which equals a “Ranch Weighted Acreage” of 4,000.

One thing to note about this formula: NMDGF uses all private land in the PMZ to determine private land authorizations – not just the EPLUS enrolled properties. If, for example, only 50 percent of the private land acres are enrolled in EPLUS, those ranches would also get authorizations from the private properties that are not enrolled. If the State Game Commission wanted to, it could revise the EPLUS formula and put those elk hunting opportunities from “non-enrolled” properties into the draw rather than give them to landowners.

The next step in our calculation requires us to jump over to the Elk Rule, which is a separate document (but also in our EPLUS Library). It’s full of interesting information, including the estimated size of the elk herd in each GMU in the PMZ, along with the bull:cow:calf ratio and the harvest levels for bulls and cows.

Based on the percentage of private versus public land in the Primary Zone of GMU 15, NMDGF has allocated 513 private land authorizations for the hunting seasons from 2019-2022. To determine how many of those tags the Bar X Ranch will get, multiply 513 (total authorizations in the GMU) by the Percent of Ranch Weighted Acres (0.017 percent) and it gives the ranch a total of 8.72 authorizations.

NMDGF rounds up or down to the closest whole number to determine the actual number of authorizations. In this case, the Bar X would get nine. NMDGF uses similar formulas to determine how many bull, either sex and cow tags a particular ranch can sell, trade, give away or not even use.

As we said at the outset, EPLUS is a complicated rule, and the Primary Zone is just one facet of it. We’ll explore other aspects of EPLUS, such as how tags are allocated to Small Contributing Ranches in the Primary Zone, plus the Secondary and Special management zones in the next installment.

And there’s more after that. We’ll get into issues like unitwide tags, minimum ranch size, hunt dates on EPLUS ranches and the like. If you have questions, send them to us at [email protected].