One Cast, Everyone Knows the Rules 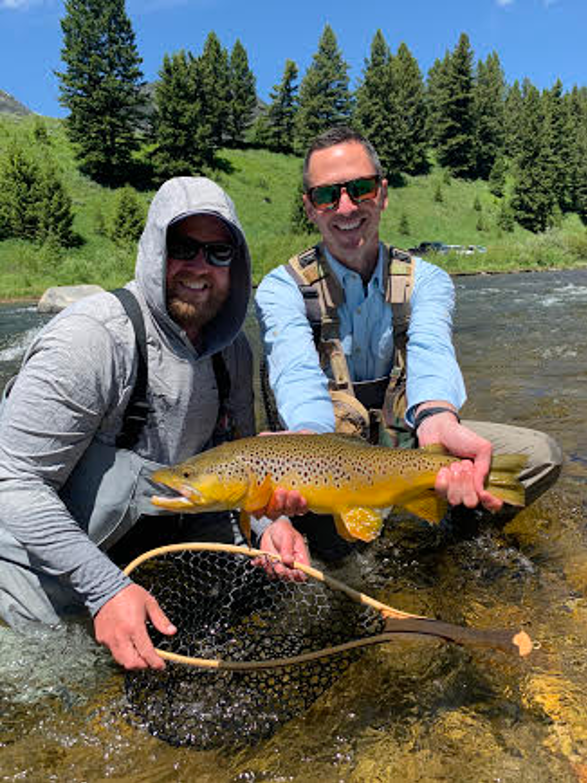 As we walked further upstream, the location Sam described began to materialize. He is never one to be quiet, and he had been talking about this spot all morning. As we continued the trek, I could not help but appreciate where we were and what we were doing. Surrounded by mountains, hunting brown trout with salmon flies in the back channels of the Madison River. This was a trip that we looked forward to all year that was nearly spoiled by COVID-19. We had rain and 40-degree weather for the first four days.  This was our last day and the sun was finally paying us a visit.  On this morning, the fish were looking up for the big bug.

There it was, a deeply cut bank with a soft pocket that was adjacent to a swift current. This was a money shot. A perfect location for a big fish to hunker down and gorge on salmon flies as they drifted through his zone. Any fish in this spot was going to be a bruiser.

“Right here.” Sam said as we stood about 25 feet away.

It was right before midday, and we paused to discuss the approach. One cast is likely all we would get. It had to be perfect.

His question was met with silence. I had landed a nice brown in the first channel of the day along with a few rainbows.  There was no question that the bite was on and the fish were chasing the big bug. Brett had poked a few fish but nothing to hand. It was Brett’s fish to lose, and he knew it.

“Let’s do it.” Brett said eagerly.

“The fish are biting. A brown isn’t going to let a big bug go over his head without looking at it.  We want it in the fast stuff to the inside of the soft pocket. He’ll be sitting in the undercut above us.” Sam said without hesitation and the confidence of Johnny “Right Here” McClure calling his shot.

As Brett and Sam continued to discuss the execution of the cast, the wind, the presentation of the fly, and the urgency to start stripping as soon as the bug hit the water, I looked out over the snow-capped mountains and prepared for the show.

It had been a long week. I woke up with a stiff and swollen casting hand the last three mornings. The pain was bearable after a few Advil and a strong cup of coffee. You see, despite the cold and the rain, we were having a successful trip. We found multiple hatches of green drakes and PMDs. We were able to cast to and catch rising fish. But, the whole reason we came to Montana was to ring the dinner bell with a salmon fly. If Brett could make this cast, he was going to have a shot at the title.

After solidifying the game plan, Brett slowly waded into position.

“About 3 feet from the bank.” Sam said softly. “We want your back cast to be up, your forward cast to be out, and push with your thumb.”

“Look how easy this is.”

“Stop casting with your arm!”

“Your line is jumping!!”

As Brett got into position, he checked his fly and leader one last time to ensure no unnecessary nicks would ruin his shot. He settled into the fast-flowing current of the Madison River. His feet were nestled in between countless rocks and surrounded by just as many boulders.

“Nice and easy.” Sam said as Brett began to strip line from his reel.

“I’m going to try and put it right over there.” Brett explained as he pointed with the tip of his rod.

Brett lifted his rod tip and released the fly from his hand. As he started his back cast, Sam’s words echoed in his mind. “Easy… nice and slow.. tuck your elbow.”  Brett’s rod tip came forward with ease and finesse as he released more line. The fly traveled in a perfect line as Brett started his final back cast. He gave one smooth haul for a little more distance on the last forward cast.

Once Brett released the line, the fly cut through the air effortlessly and landed right above the undercut. Brett just rang the dinner bell. The cast was beautiful, but there was no time to admire it.  Brett started stripping line immediately. As the fly approached the hot zone, a dark, golden body started to emerge.  Just like that, the fly was gone…“SET!!!!”

Written and experienced by:

I like chasing brown trout on the Pere Marquette River.

share on
See other posts related to Michigan BHA michigan news michigan
Get the latest news and stories, right to your inbox.
Search
Local Chapters