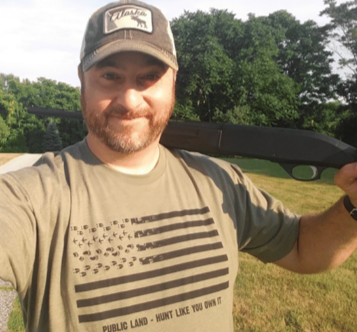 Adam is an architectural engineer who developed his love for the outdoors at a young age on the lakes and in the forests of Northern NJ where he grew up. His earliest exposure to public lands and waters was in the form of hiking and camping with the Boy Scouts of America. Fishing the many waterways of Sussex County, became a passion of Adam’s as a child and into young adulthood. With two non-hunting parents, it wouldn’t be until his late twenties when he purchased his first compound bow, became a licensed hunter and discovered the world of bow hunting whitetail deer. Hunting endeavors now include; Turkey, Pheasant, small game, and most recently, waterfowl. Outside of his professional life, Adam has volunteered his time to local land use boards, recreation boards and the historical preservation society with an acute interest in open public space preservation. Adam aspires to one day retire to the mountains of Alaska with his dog, and a good rifle. And his wife. 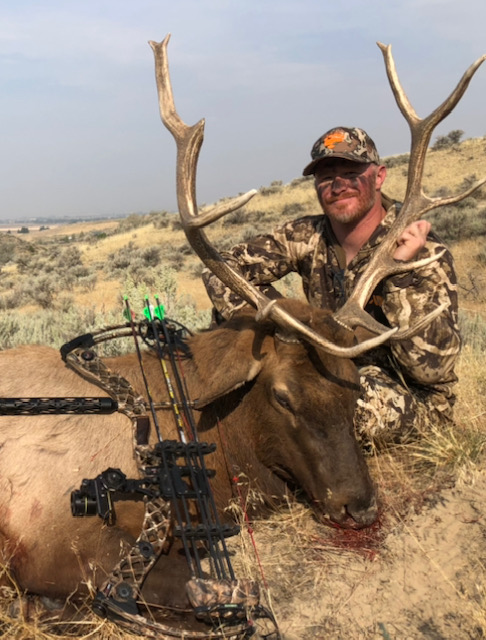 Rob grew up in central New Jersey near Raritan Bay. He was always surf fishing blues or stripers when he couldn’t get on a party boat to chase fluke, wreck fish or make that 100 mile run out to the canyon for tuna. Not to mention headed out with neighbors and friends to get after the sweet water fish in any local pond we could find. Rob came to hunting a little later in his late 20’s after picking up a bow. After lots of hard work and practice Rob got to become a proficient archery hunter, including elk hunting out in Idaho or hoping a Pennsylvania bear would stroll by. Rob has been a proud BHA member for several years and has enjoyed making friends in many different chapters locally and beyond. It’s been a great way to meet new people and have new experiences. He only hopes to progress the NJ Chapter, defend our access rights and support hunting, fishing and trapping on the public lands that belong to us all. Let’s build more brush blinds and less condos! 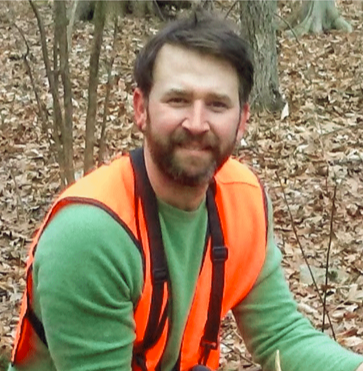 John is a lifelong New Jersey sportsmen. His passion since childhood has been making primitive and traditional archery gear. He hunts big and small game each fall with his hand-crafted equipment. His stories and how-to articles have been published in Traditional Bowhunter and Primitive Archer magazines. He also enjoys fishing, foraging, camping, hiking and taxidermy. John grew up in northwestern New Jersey but now resides in west central New Jersey with his wife and two children. He graduated from Pennsylvania State University with a bachelor’s degree in wood product science and has worked in the wood products industry intermittently between raising children.  John became involved with Backcountry Hunters & Anglers to ensure that his children would have the opportunity to come to love his treasured public grounds as much as he does and have the opportunity access new wild places decades from now. 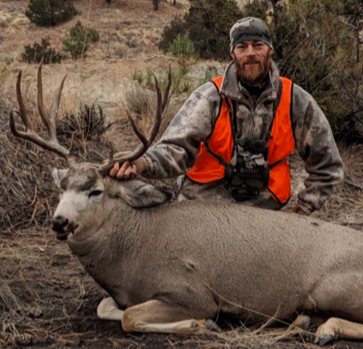 Steve was raised in suburban central NJ, but developed a passion for public lands at a youngage, fueled by his weekend excursions to the Delaware Water Gap and the Pocono Mountains with his father and grandfather. From these experiences, Steve was drawn to the rolling farmlands and hardwoods of northwest New Jersey, where he currently resides with his wife, kids and dogs. An accountant by trade, Steve also volunteers as a hunter education instructor and is a self-described “outdoor generalist,” partaking in a multitude of the hunting, fishing and trapping seasons that New Jersey has to offer. In the last few years, Steve’s love of wild places has lead him to explore public lands outside of NJ, hunting and fishing in neighboring New York, Pennsylvania, Wyoming and Montana. These experiences have driven Steve to become an even stronger advocate for protecting and preserving our public lands for current and future generations. 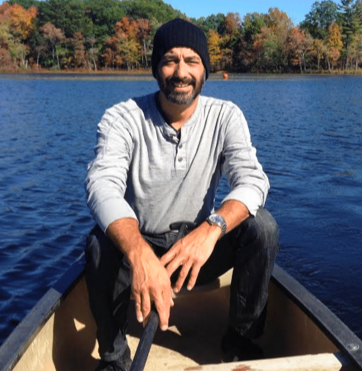 Gerry was born in Central New Jersey and grew up fishing the state’s streams and coastal waters. He fished wherever his bicycle would take him, exploring the coast from Sandy Hook to Island Beach State Park south to Cape May. His father and grandfather were his mentors and helped me develop my life-long love of the outdoors. Later in life Gerry developed a love of hunting, and hopes to pass along his passion to his children, Gianna and Henry. He received a BA in Psychology from Rutgers University, a Mastersin Health Education from Columbia University and Doctorate from The New York College of Podiatric Medicine.In this small and most densely populated state, public land, hunting and fishing access is of paramount importance. Gerry’s eye looks west and longs to explore it’s wonderous landscape, but his heart is here in New Jersey. He is proud to represent the amazing organization that is Backcountry Hunters & Anglers here in the Garden State and is committed to improving access to our public lands, increasing opportunity and passing on the legacy of hunting and fishing. 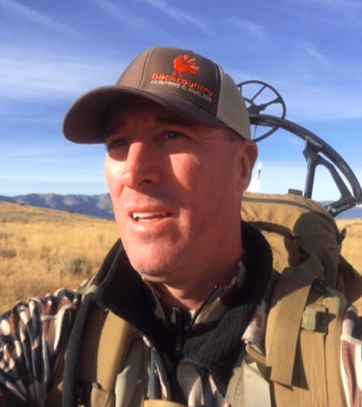 Joe is an outdoor enthusiast and law enforcement professional hailing from central New Jersey. He grew up in rural Burlington County in an agricultural family where he spent his time farming, hunting deer, upland game, and turkey. He received his bachelor’s in Natural Resource Management from Cook College, Rutgers University and took up employment with the New Jersey State Police shortly after. He spends his time volunteering for nonprofit organizations and is an experienced DIY western hunter. Joe believes in supporting organizations that share a common interest in keeping “Wild Places” wild and accessible to all. 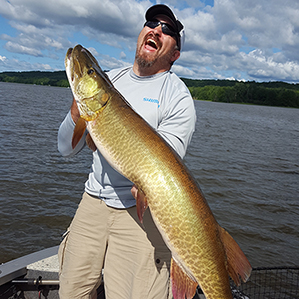 Growing up in Northern New Jersey and spending his formative years exploring the woods surrounding his parents’ hippie commune, Shawn developed a healthy appreciation for the natural world. Never fully at peace until fireside in the wilderness, Shawn spends as much time as possible hunting, musky fishing, camping, and hiking on the public lands and waters of New Jersey, New York, and Canada. Other interests include musky bait making, playing bass guitar, and video production. He received his bachelor’s degree in biology from East Stroudsburg University and, in between his outdoor jaunts, works as a clinical trial manager by day and owner of a small digital production company by night. Now more than ever, our public lands are being threatened and compromised… Shawn joined the BHA to be one more voice in defense of them. 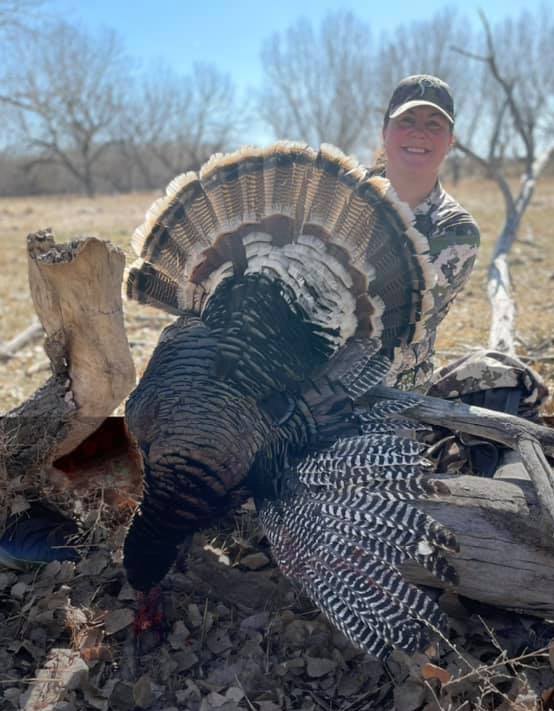 Cristina grew up in a non-hunting family in central NJ, became an adult on-set hunter in 2011 and has not looked back since.  Growing up, she spent all summer outdoors at her family's summer home on a small lake in north western NJ.  Her love of fishing was born from catching sunfish out of that lake, and has since fished from NJ to Louisiana to Alaska and in between.  Since her introduction into the hunting community, Cristina has harvested deer, black bear, caribou, turkey, pheasant, snow geese and more.  She has traveled to several Canadian provinces as well as all across the US to hunt.  Trapping and training her hunting dog are tops on the list currently.  Most of her spare time is spent introducing women to the outdoors through mentored hunt programs and outdoor activities like kayaking, fur sewing and more.  By day, she is the Business Executive for a national non-profit devoted to trapping.  A love of planning out of state DIY public land hunts is what brought her to support BHA and she is excited to pitch in here in NJ. 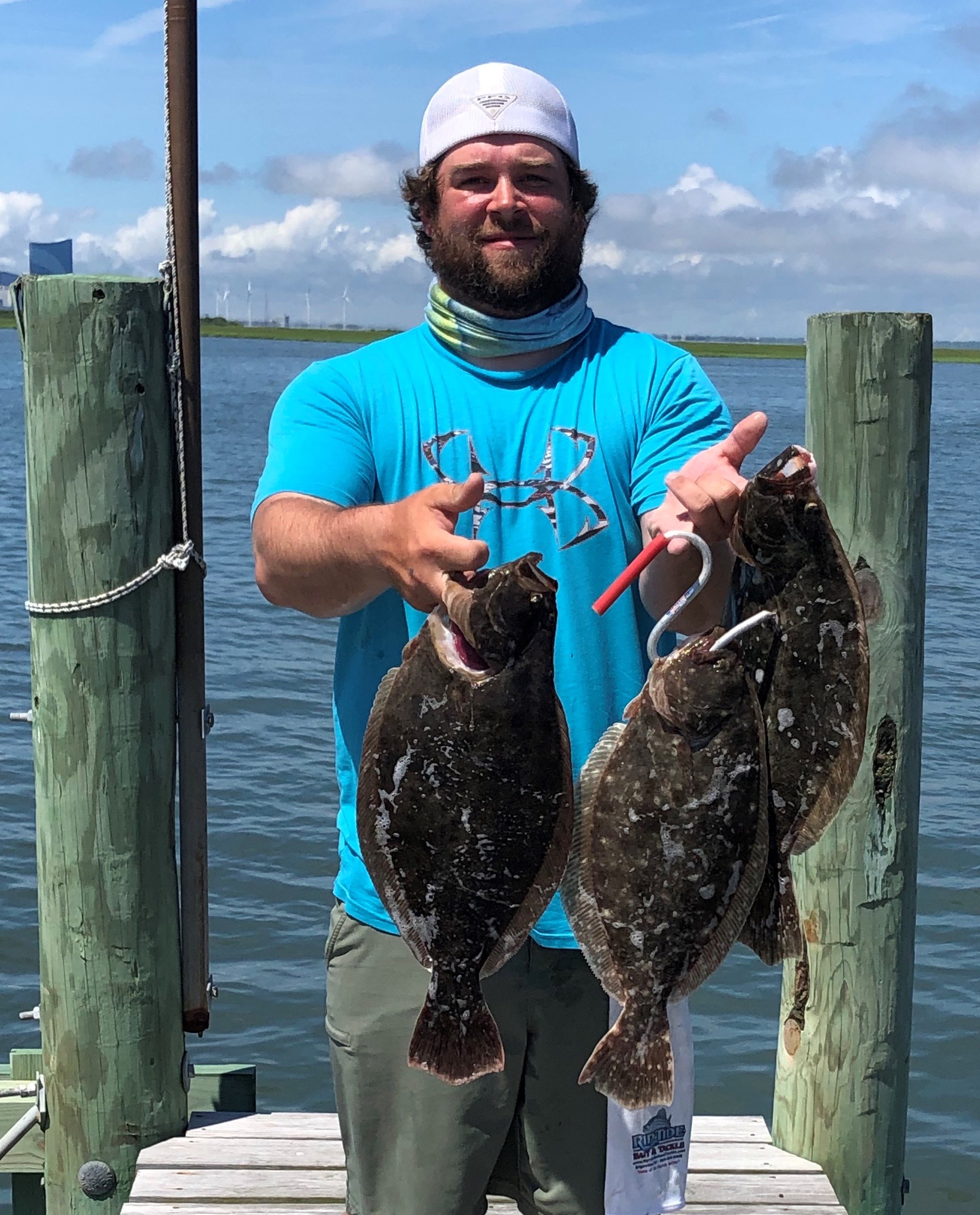 Kevin is a lifelong resident of Southern New Jersey. His passion for the outdoors was sculpted as a young boy running a 17’ Skiff for weakfish at night in Barnegat Bay and surf fishing the Brigantine rips during the striper migration. Kevin is also an avid bow hunter who developed his love for hunting at a young age running rabbit dogs in Salem County. While most of his fall and winter time is consumed by bow hunting, Kevin is also very active waterfowl and turkey hunter. Kevin also participates in firearm whitetail seasons across New York, New Jersey, Maryland, and Pennsylvania. Kevin graduated from Salisbury University where he spent all available time outside the classroom or off the football field chasing Sika deer through the Maryland marshes. In his personal life Kevin is a Manufacturing Manager for a large homebuilding company, a husband to his wife Shauna of 5 years and new father to his daughter Juliana. These many years of utilizing the resources New Jersey has to offer, and being a new father has inspired Kevin to get more involved in passing on such important traditions to his daughter and other generations to come. The work the BHA does on preserving rights and access to hunting and fishing opportunities is in Kevin’s mind the path forward in securing these traditions. 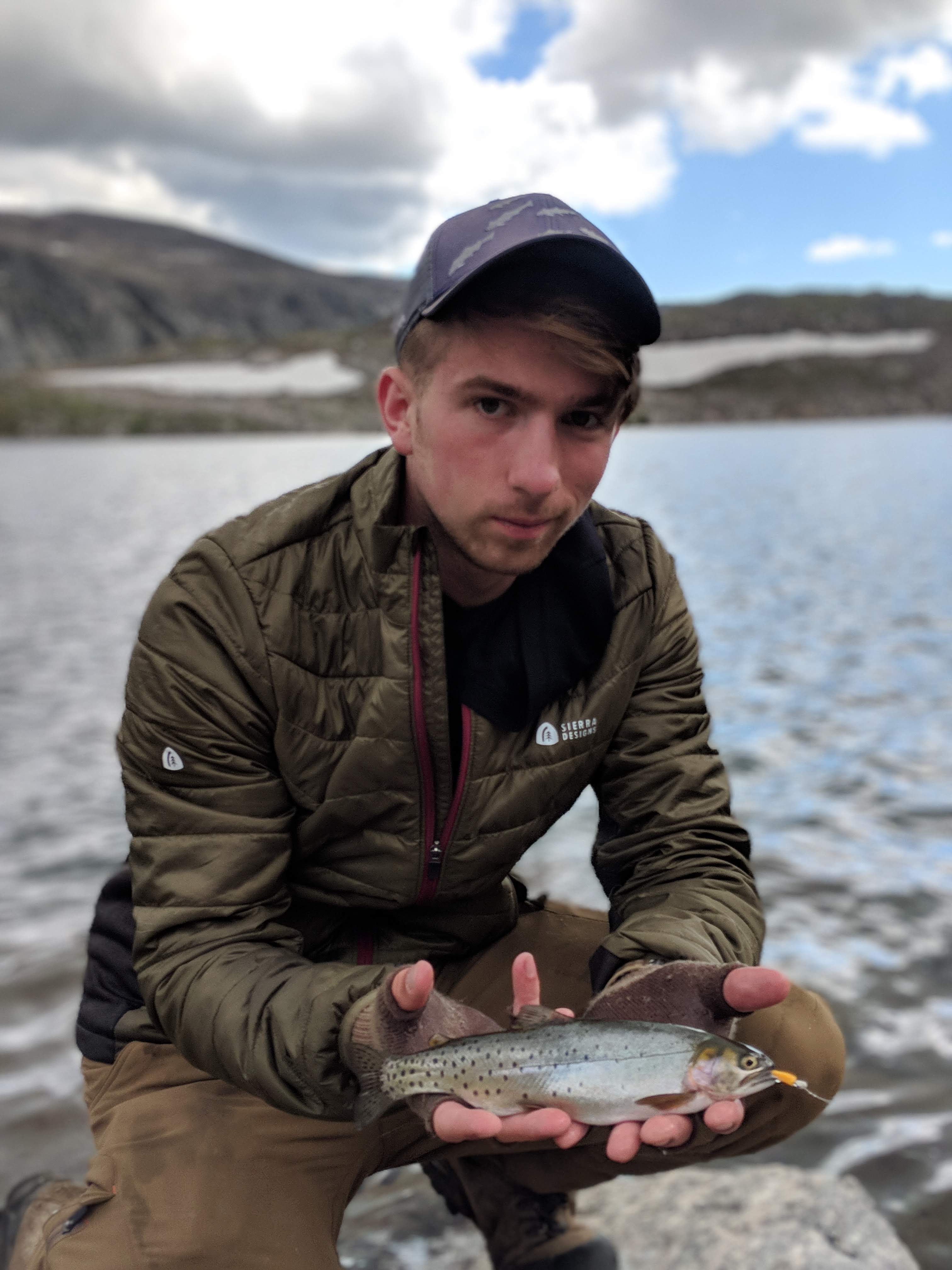 Levi is a lifelong resident of NJ and grew up in the Highlands region of northwestern NJ. He recently began working as a stewardship technician in southern NJ working to restore degraded habitats. He graduated from East Stroudsburg University with a bachelor’s degree in environmental science where he focused his studies on water quality issues. He considers himself an outdoor generalist and everything from frog gigging to backpacking trips is fair game. His most recent outdoor interests have included herping, native plant propagation, and foraging for mushrooms and edible plants. Much of his time hunting is spent chasing turkeys in the spring and whitetail deer in the fall with his bow. Public lands and waters have been at the center of his passion for the outdoors. Levi is excited to join BHA in guaranteeing these wild places are available for future generations.

Born and raised just outside of Vienna, Austria, Paul Miskulnig’s love of the outdoors began at an early age, fishing on the Adriatic Sea with his grandfather and spending summers and winters hiking and snowboarding in the magnificent Austrian Alps. It was ultimately his passion for eating wild game - a staple of Austrian cuisine - that drew him to hunting after moving to the United States in 2018. Coming from a country with little remaining wilderness, Paul quickly realized how valuable wild places are and the importance of conserving them. Learning about the North American model of conservation and the country’s unique public lands system is what ultimately drew Paul to his passion for helping to protect such places through organizations like BHA. Paul currently resides in pastoral central New Jersey with his wife Anna and dog Charly. With his first child on the way, he looks forward to many hours spent together in the great outdoors sharing his love of nature with his family.