Or sign in with
MT BHA Responds to Reassignment of MT FWP's Wildlife Division Chief
By Montana BHA / May 20, 2022
BHA Awarded $165K for Post-fire Rehabilitation and Connectivity in California
By Devin O'Dea / May 19, 2022
What is SCORP?
By James Brandenburg / May 19, 2022
BHA Bestows Top Honors at North American Rendezvous
By Katie McKalip / May 17, 2022
EVENT RECAP: Tree Plating at Gale Meadows Wildlife Management Area
By Adam Mitchell / May 16, 2022
2022 Idaho Legislative Recap
By Idaho BHA / May 10, 2022
From Rags to Tags
By Alex Gorman / May 09, 2022
Striped Bass Amendment 7: ASMFC Spring Meeting Recap
By Christopher Borgatti / May 08, 2022
Colorado Chapter Engages on GPS Points Bill
By Colorado BHA / May 06, 2022
OPINION: Timing of FWP's pen-raised pheasants plan is bad
By Graham Coppes / May 06, 2022

One of our favorite events at BHA's annual Rendezvous is the Camp Chef Cookoff, where BHA members from across the country represent their local chapters and compete against one another for the coveted bronze trophy! Each team of two has to prepare their meal in one short hour, using limited utensils and tools, and all cooked over Camp Chef burners. Teams need to start with raw ingredients (unless pickled or cured, for example), and no domestic meat is allowed - only wild game. Plates are then tasted by celebrity judges and scored based on presentation, flavor, regional representation, creativity, cleanliness of your cooking area and the hospitality offered to the judges. The 2021 judges were famed wild game chef Hank Shaw, MeatEater's Clay Newcomb, ElevatedWild's Rachel Owen, Forage Fed's Anna Borgman and Burch Barrel's Jaime Teigen. 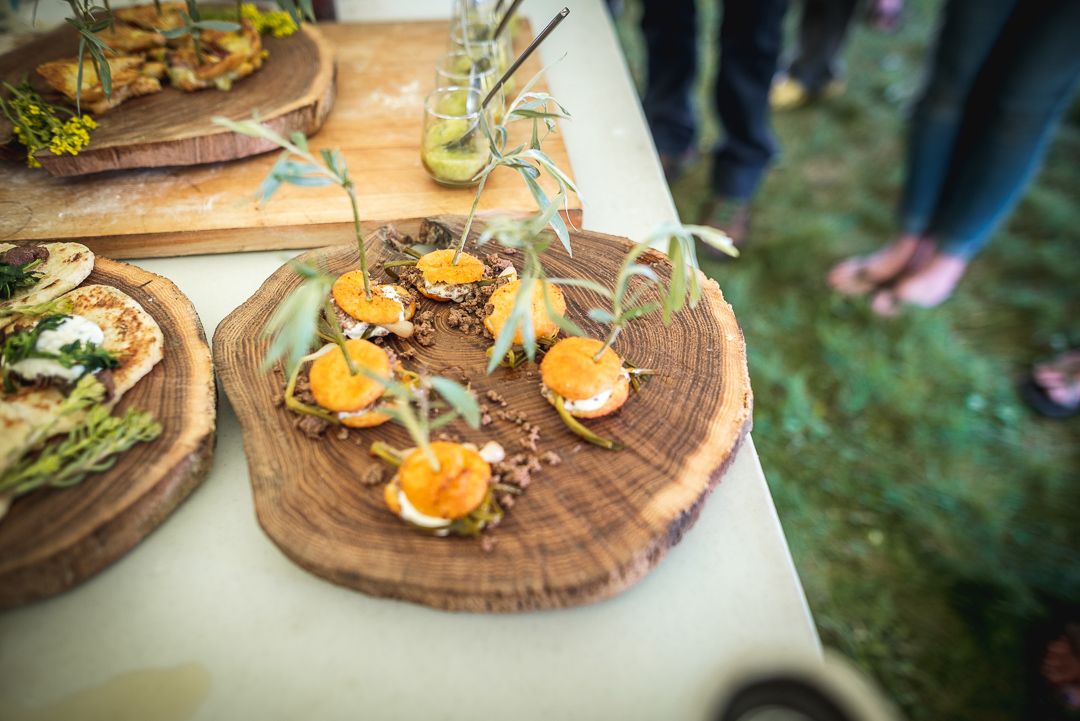 This year, the Montana Chapter was represented by our board vice chair Tom Healy and our southwest Montana board member Scott DeSena. The duo themed their dish 'A Celebration of Sage' as a nod to North America's most threatened landscape, and the courses featured critters and plants - both native and invasive - found in the sagebrush steppe. 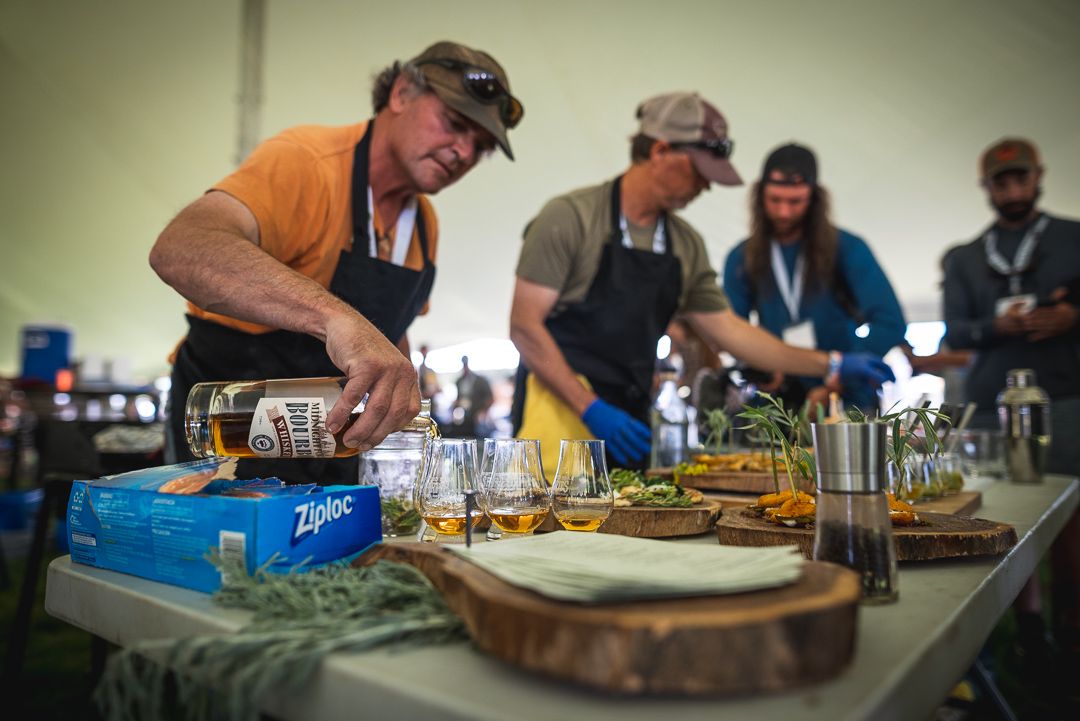 And while these two chapter leaders led the charge and deserve all the credit, the ingredients were crowdsourced from other Montana chapter leaders and members. Our stewardship leader Corey Ellis killed the antelope for the hand-ground pronghorn pambazo; our R3/DEI leader Paul Kemper provided the mountain lion for the monte cristo sandwich, which was topped with honey made from bees raised by our chapter treasurer Lou Bahin; Dane Rider, our federal policy leader for the chapter shared some of his sage grouse seared in some of his duck fat for the shawarma; Scott DeSena landed the trout from the Beaverhead for the pickled dish, and he and Tom picked the wild onions from the Bighole that they then fried in tempora; the sorbet featured prickly pear from the banks of the Beaverhead; the cocktail featured foraged rose hip & juniper berries, the above mentioned honey and gin from Headframe Spirits in Butte; plus, eggs in the recipes were from BHA member Mike Rahl's chickens and the menu itself, serving plates, garden sage and several other herbs and spices were grown by BHA members Hannah & David Nikonow. Pretty incredible! Oh, and we capped it all off with a Midnight Forest Bourbon from Spotted Bear Spirits in Whitefish - neat. 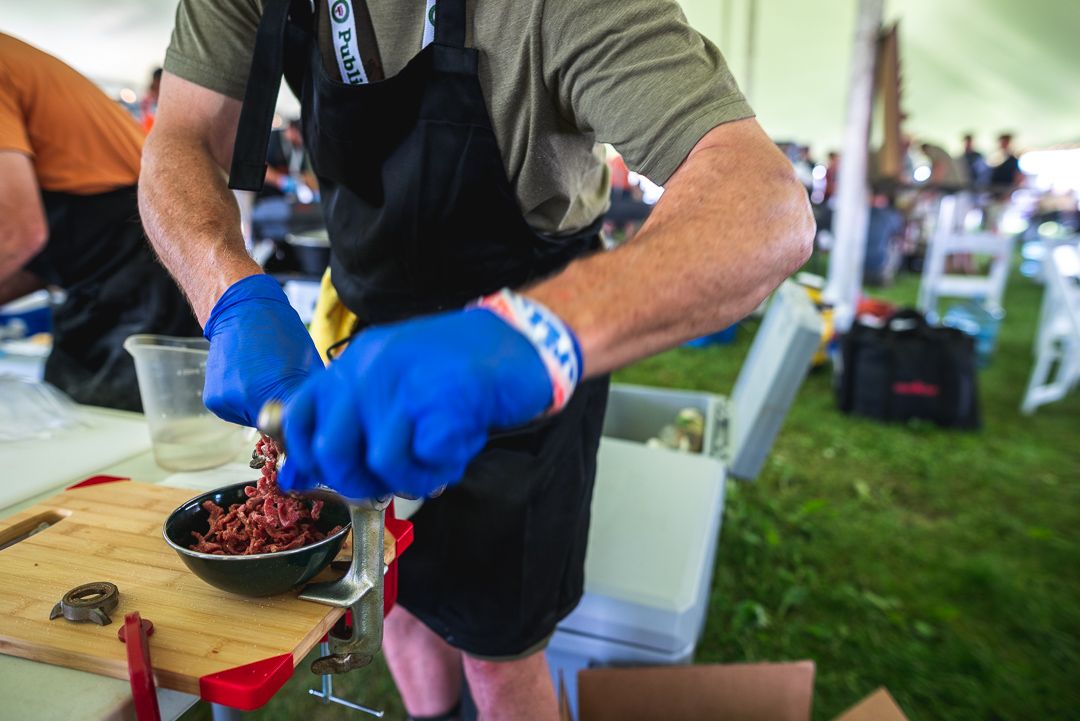 And at one point, the team realized they needed some toothpicks, so Tom and Scott carved some from willows found along the Bitterroot near campground #2. Bonus points for ingenuity? 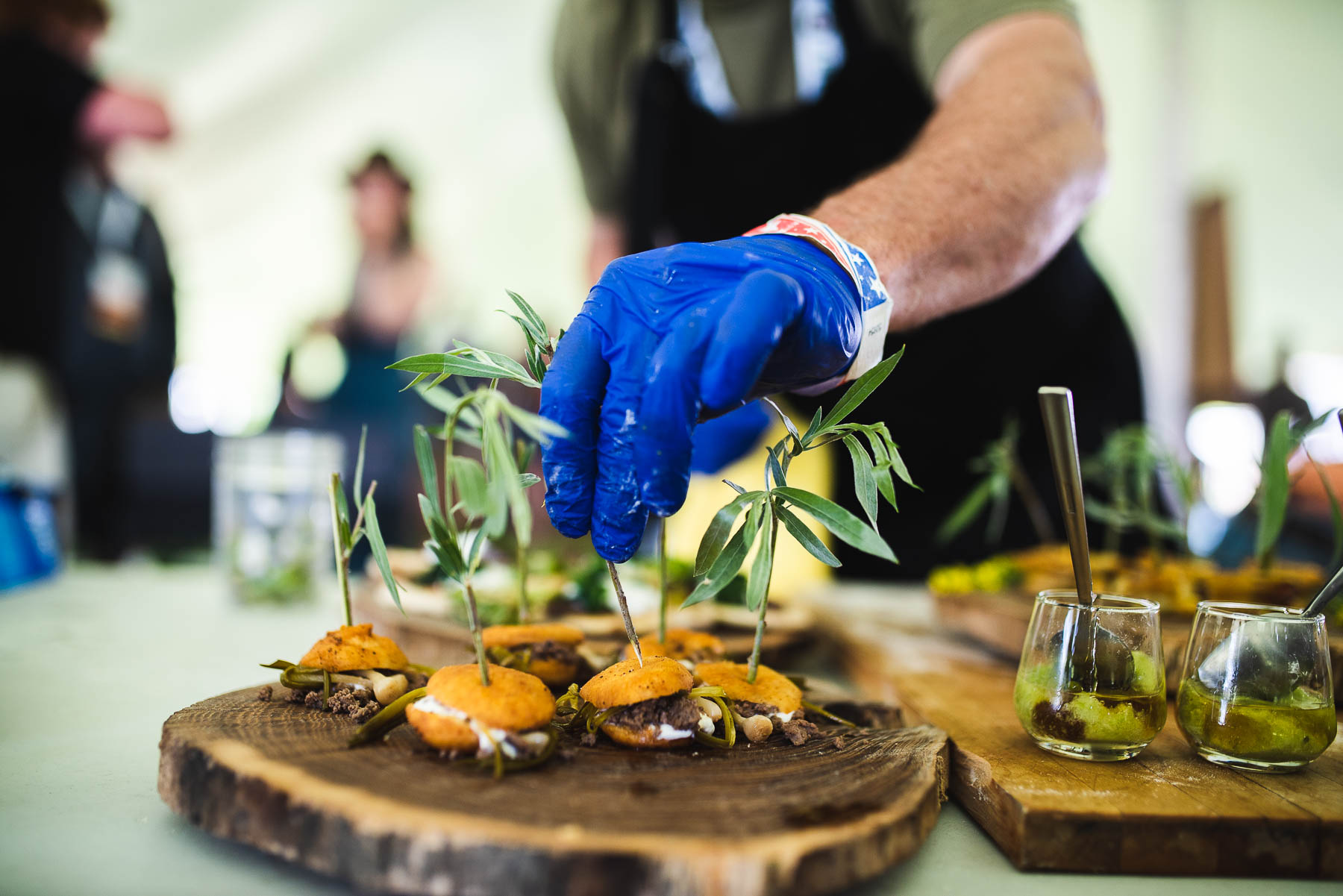 Even more impressive, after all of this (with the pictures to prove it!) the Montana Chapter was surrounded by other public land owners from across North America who are equally talented in the field AND the kitchen. Some of the wild game featured included bowhead whale, bison, javelina, Alaskan grizzly, muskox, owl limpets, aoudad, alligator and even some marmot! 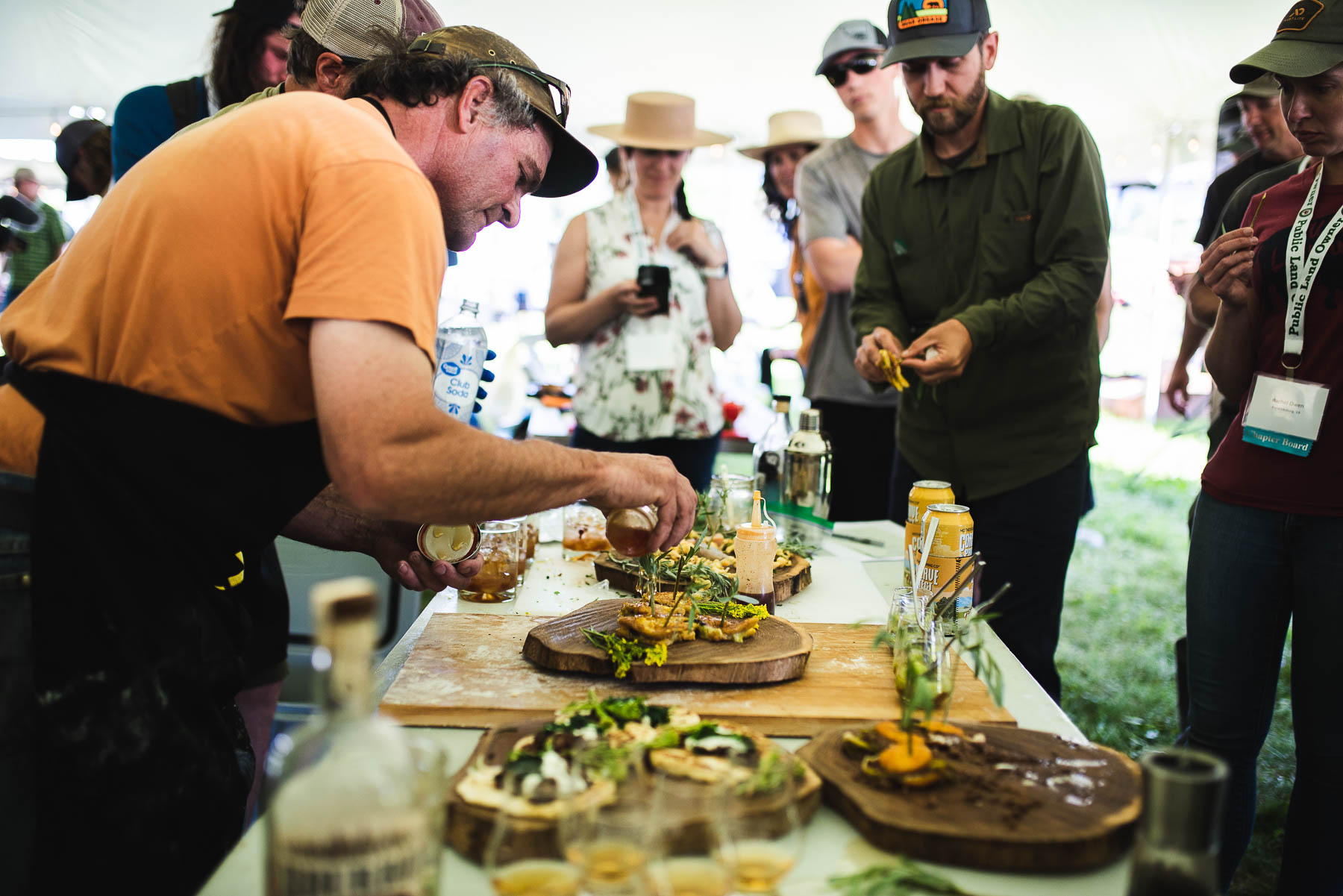 When the judges delivered their final results, we sat back - fully expecting to take home the trophy - and cheered our BHA brethren as the Florida Chapter took third place, followed by reigning champions Arizona with second, and the father-son duo from Minnesota who took home the trophy! 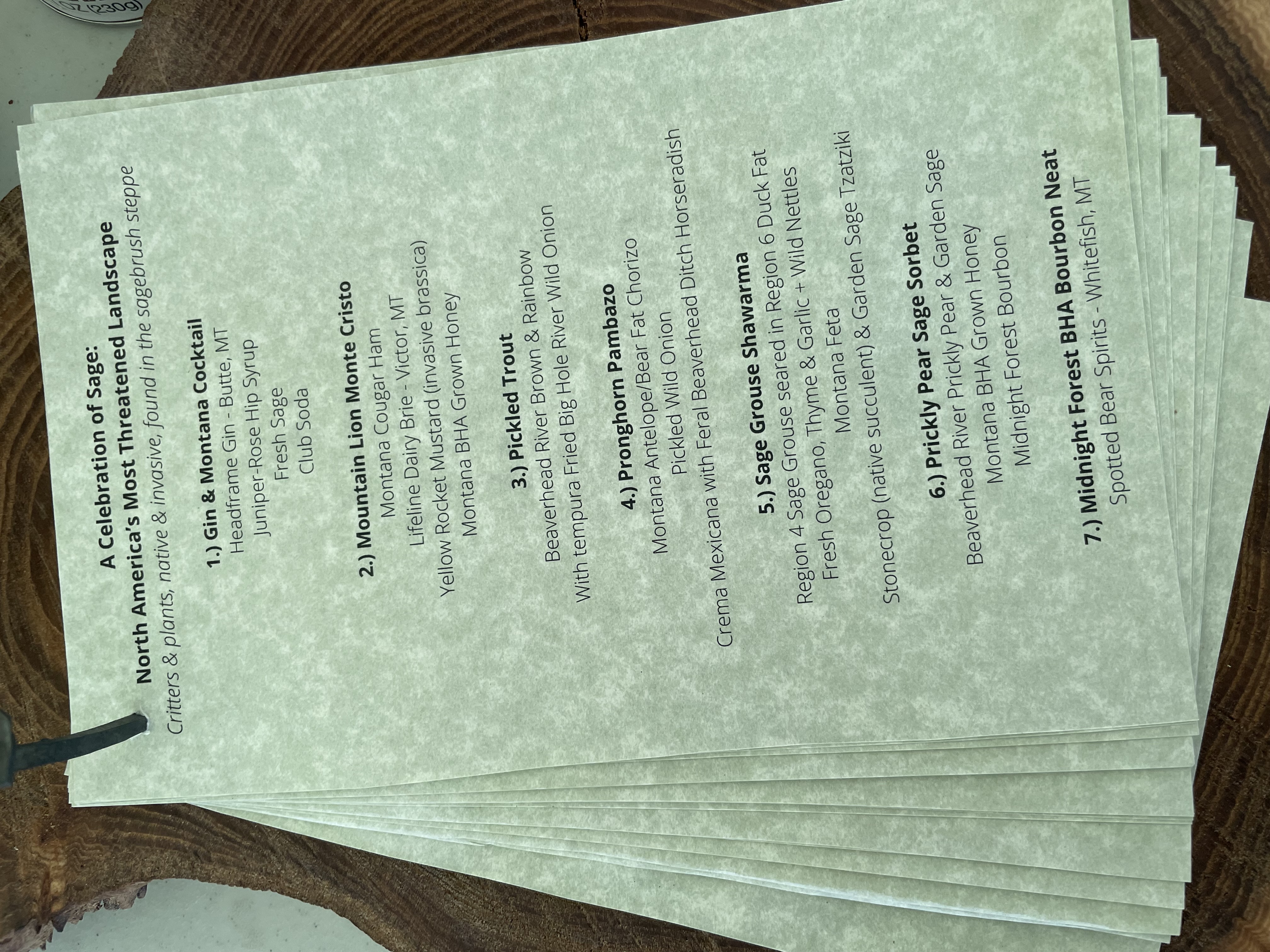 While we didn't win, it was a great event and chance to bring attention to all the wild food found in Montana's sagebrush country, and we can't wait for this event again next year.