Location is Everything for EPLUS 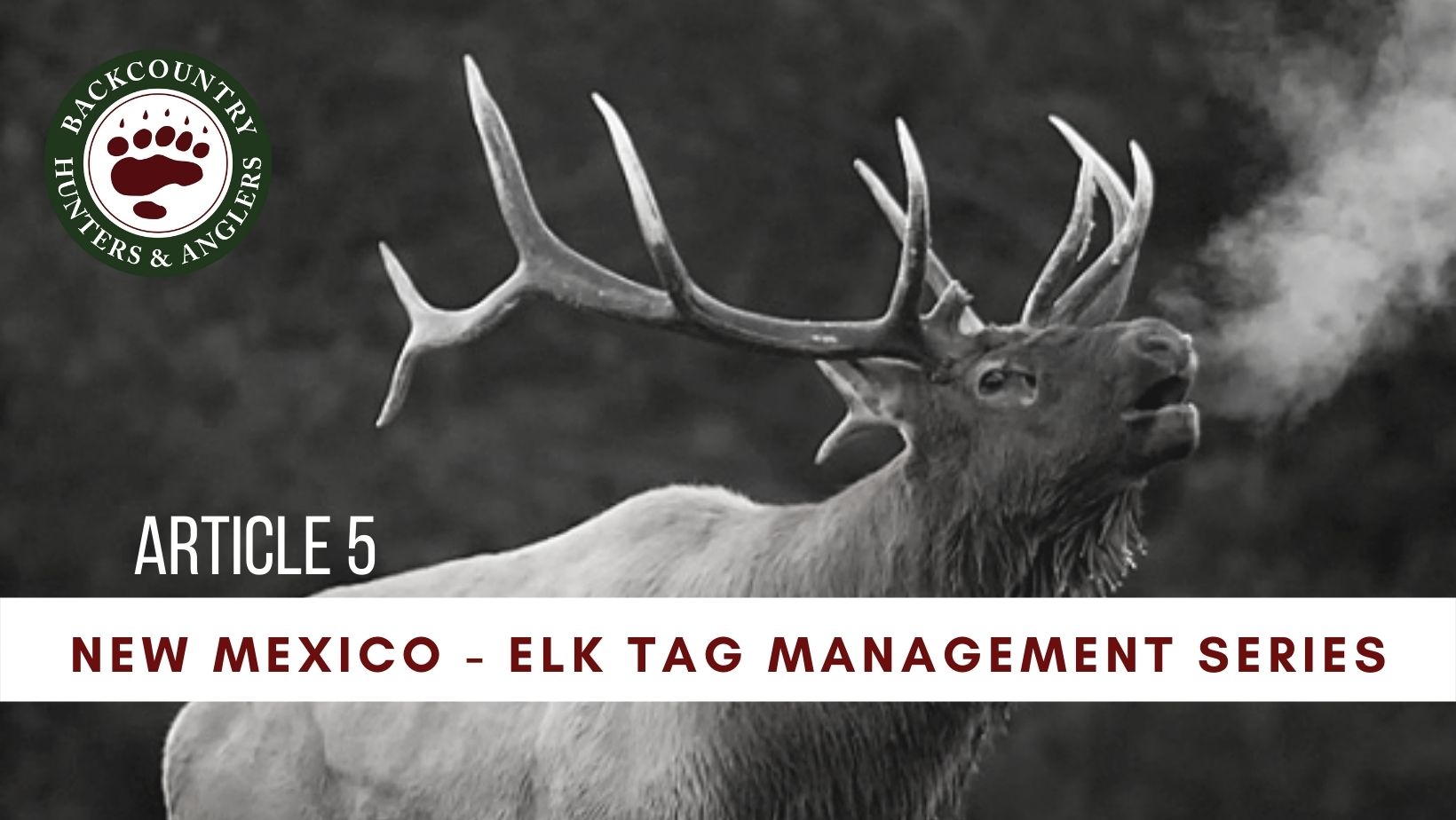 Fifth in a series

Many private landowners in New Mexico with elk on their property are eligible to participate in EPLUS. Not all of them qualify – they first have to exhibit verifiable benefits to elk. But those who do qualify receive thousands of authorizations to sell, give away or not even use.

Where those hunts actually occur is a key question, however. For a program titled the “Elk Private Land Use System,” it seems odd to many New Mexico hunters that a large number of EPLUS tags can be used on public land.

Similarly, for a program that aims to acknowledge landowners who “provide meaningful benefit to elk,” it seems odd that ranches as small as two or three acres can qualify to receive EPLUS authorizations. Other states have minimum ranch sizes to participate in similar programs.

Most New Mexico hunters know that “unitwide” tags exist. But how that part of EPLUS works is a mystery to many.

As discussed in Part 3 of this series, landowners in the Primary Management Zone who meet the minimum requirements for elk habitat are eligible to receive EPLUS authorizations. But EPLUS regulations that govern the program (and which are approved by the State Game Commission) say landowners will automatically receive unitwide tags unless they request ranch-only. In the Secondary Management and Special Management zones, all private land tags are ranch-only.

Unitwide tags can be used on all legally accessible public lands in that GMU, as well as on the issuing ranch itself, plus all other unitwide ranches in the GMU. In addition, all those unitwide ranches are technically open to draw hunters, as well. It appears that the theory behind unitwide is that it expands the area available to hunters.

In the past, however, hunters have complained that some unitwide ranches purposely made it difficult to know their ranch was open to all. Hunters have reported locked gates, misleading signs or that ranch managers were unavailable to open gates or answer questions.

In addition, many unitwide ranches may have elk at some time during the year, but not during hunting seasons – which is why they opted out of the ranch-only option in the first place.

The practical effect of the unitwide program isn’t clear. In recent years NMDGF has improved the information available to hunters about how to access unitwide ranches, such as posting maps on their website. But NMDGF doesn’t publicize much information about unitwide hunts, and therefore many questions remain about EPLUS. For instance, draw hunters have no idea how many “private land” hunters actually hunt on public land in any given GMU, or how many draw hunters actually hunt on private lands. NMDGF doesn’t post those numbers anywhere and doesn’t ask hunters to provide that information on their official Harvest Report.

In an effort to better understand how unitwide works and how it affects hunters, the NM Chapter of BHA and New Mexico Wildlife Federation officially requested the most recent numbers from NMDGF through the Inspection of Public Records Act. The request was made in August 2021. As of March 2022, we still had not received them, in violation of the state law over public records.

But according to a similar public records request nearly 10 years ago, the number and percentage of unitwide tags is not a huge portion of the EPLUS total. In the 2014-15 hunting year, a total of roughly 8,300 EPLUS tags were distributed in what is now known as the Primary Zone. Of those, 2,500 were unitwide, while almost 5,800 were ranch-only.

Regardless of the number allocated to each hunt type – public and private – the bottom line for many hunters is that EPLUS takes a valuable public resource (elk tags) out of public ownership and gives them to private landowners to sell, trade, give away or not even use, then allows several thousand tags to be used on public land, further crowding draw hunters.

Many western states have private land elk hunt programs, and some have unitwide tags. But New Mexico is one of few – if not the only – state that doesn’t have a minimum size requirement for ranches to receive “private land” elk tags.

In Colorado, the minimum ranch size to enroll in the Landowner Preference Program is 160 acres, and 10,000 acres in the Ranching for Wildlife Program. In Utah, it’s 5,000 acres. In Idaho, the minimum to receive tags is 640 acres.

In the current list of EPLUS landowners in New Mexico, ranches as small as two and three acres get tags. And many small ranches are enrolled as “ranch-only.” For example, in GMU 4, which is all ranch-only, ranches of three and four acres are enrolled, meaning the tags must be used on that particular ranch or on a ranch where the hunter has written permission.

Click here to see the current list of EPLUS-enrolled ranches, which lists them by GMU, deeded acreage and number of authorizations by weapon type.

When the Game Commission opened the EPLUS Rule in 2018, numerous hunters asked that it change the regulations and require a minimum ranch size to enroll in the program. Instead, NMDGF proposed new regulations to clarify the definition of “meaningful benefit” to elk. But size still does not matter. If a ranch can show it has water, cover, forage, agriculture and relative isolation from nearby development, it’s allowed into EPLUS, no matter how small it is.

Ranches in the Primary Zone limit their authorizations to that ranch only, and thus keep all other hunters off the property (unless they have written permission). But all ranches in the Secondary and Special Management zones are considered ranch-only. They don’t have the option of unitwide.

The Secondary Zone is what was once called “outside the Core Occupied Elk Region,” or COER. Ranches there have occasional elk use. And prior to 2018, they received actual authorizations to sell, trade or not even use. Some 8,000 authorizations a year went unused, so in 2018 the Game Commission approved an NMDGF proposal to eliminate those authorizations and instead allow unlimited over-the-counter elk licenses in that zone only.

That’s essentially the same approach NMDGF took years earlier with APLUS – the private land program for antelope. Now pronghorn hunters work directly with a landowner to purchase access to the ranch, and can buy an antelope license online or at the nearest sporting goods store.

While some hunters feared overhunting from unlimited antelope tags would damage those herds, the Game Commission reasoned that landowners would limit access – essentially self-regulate to protect their financial opportunity. Similar concerns arose during the 2018 discussions over EPLUS, but the Commission approved the OTC elk licenses nevertheless.

In many respects, that’s the model NM BHA has held up over the years: allow landowners to sell what they own – access to their private property – rather than give them a valuable public resource – transferable elk authorizations.

The current EPLUS program in the Primary Management Zone has created a financial mess, with its unregulated secondary market for tags. An EPLUS landowner can sell some or all their authorizations to a broker, who then sells them to a big outfitting chain, who might sell them to a hunting club or their clients. Thousands of dollars are changing hands, yet only when a hunter actually buys an elk tag from NMDGF is there any benefit to conservation. And hunters nationwide heard on Dan Stanton’s Elk Shape podcast the unfortunate interactions this type of money driven system creates between private landowners and the public. There is seemingly no consequence for private landowners and their staff locking out public hunters, providing false information about huntable land, and all out hunter harassment. Not to mention, with extended season dates and limited law enforcement coverage, there is virtually no policing of hunters on private land, leaving ample room for exploitation of our shared public resource.

How the 2018 OTC program is working isn’t clear yet. NMDGF has not reported any significant changes in elk populations in the Secondary Zone or asked the Game Commission to reduce elk harvest levels in those GMUs. Last August, NM BHA asked NMDGF for a wide range of information about elk hunts in the Secondary Zone, including the number of OTC elk licenses purchased by residency and by hunt type. As of mid-March 2022, we still have not received an answer. We urge the department to be forthcoming with this information so the average New Mexico hunter has a clear picture of elk tag distribution. We believe there is a better way forward, and the first step is transparency.

Join our chapter group on Facebook or follow us on Instagram to stay in touch as our Eplus blogs are released. Or, become a member to ensure you receive monthly chapter newsletters where we provide timely information on this and other policy priorities.