Lessons From a Bad Fly Fisher

My fly rod lays in the grass at my feet – the line in a disorganized heap, describing a story of frustration and annoyance. Handicapped by inexperience, I had attempted to battle the wind. It was a fight I had no chance of winning. The fly I had just lost was the last straw along a journey of poor casts, unnatural drifts and spooked fish. Overwhelmed, I half-dropped, half-tossed the rod aside in a quiet tantrum, cursing under my breath. 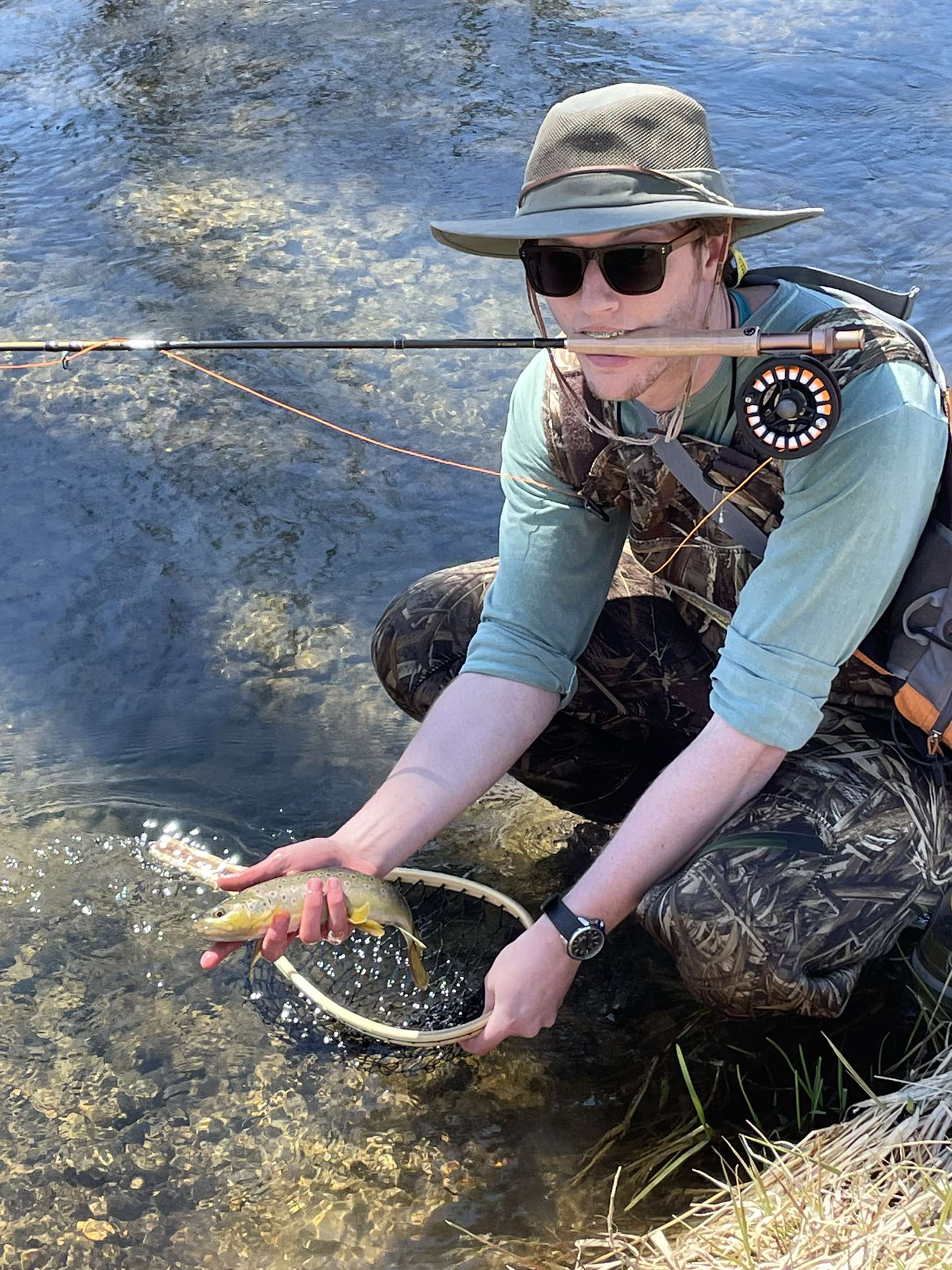 My only previous experience fly fishing was in Colorado along the Cache la Poudre River. My parents had surprised me with a guided trip as an early 18th birthday gift. I was terrible, but the guide still managed to put me on some fish. It wasn’t much, but it was all I needed. I flew home to Wisconsin with thoughts of trout swimming around my head.

Underneath the constant pressure of chemistry tests, challenging essays and figuring out my place in this crazy world, BHA became an oasis for me. I was able to learn from, and work with, people who are passionate about protecting public lands and waters and the organisms that inhabit them.

Two years later, in April of 2022, and I’m in the midst of my third semester as a student and my first semester as a general officer with our BHA collegiate club at the University of Wisconsin-Stevens Point. Underneath the constant pressure of chemistry tests, challenging essays and figuring out my place in this crazy world, BHA became an oasis for me. I was able to learn from, and work with, people who are passionate about protecting public lands and waters and the organisms that inhabit them.

The club planned a fishing and camping trip at the beginning of the semester. With that date quickly approaching, I decided to call an audible. Originally the plan was to crank Panther Martin spinners past the mouths of any willing brookie or brown. But after a couple of inspirational BHA meetings about fly fishing and its history in Stevens Point, I decided it was time to challenge myself. I made a few pretty expensive purchases on the credit card and got everything I needed. I promised myself that I wouldn’t touch my spinning rod until I caught one on the fly rod.

Finally, the day arrived. With some gas-station sandwiches sitting in our stomachs, the BHA convoy was on the road. After a couple hours driving through the flat, destructive path of ancient glaciers, we reached the region they had left alone – the famous Driftless Area, the promised land for outdoors people in pursuit of giant whitetails and quality trout streams. Arriving at our campsite, we hastily pitched tents, opened onX and then dispersed to any of the countless streams surrounding us.

Upon arriving at the creek, I hopped out of the car, strapped on my waders, and made my way to the water with my fly rod firmly in my hand. My footsteps clapped out a determined tune. With expectations soaring high, I stepped into the swift stream and carefully walked upstream, watching the glowing riffles up ahead. I prepared to take my first cast. While I had practiced leading up to this trip, I focused on form and rhythm and had neglected to practice the precise and accurate casting necessary for smaller streams. In addition, the steady wind blowing directly in my face was not something I was prepared to deal with.

I raised my rod and attempted a cast. The result: the bright orange fly line in a loop right where I wanted my fly to land. Immediately, trout swam out from underneath the line. My fly was embedded in the matted grass, safe from the mouths of any hungry browns. This pattern continued for almost an hour. Sneak upstream, make a cast, spook fish, repeat. Finally, I managed to land my fly right where I had intended to, only to have the line drag the fly downstream despite my best efforts to mend the line. I made another cast, only to find that the fly that was just on my leader had vanished. 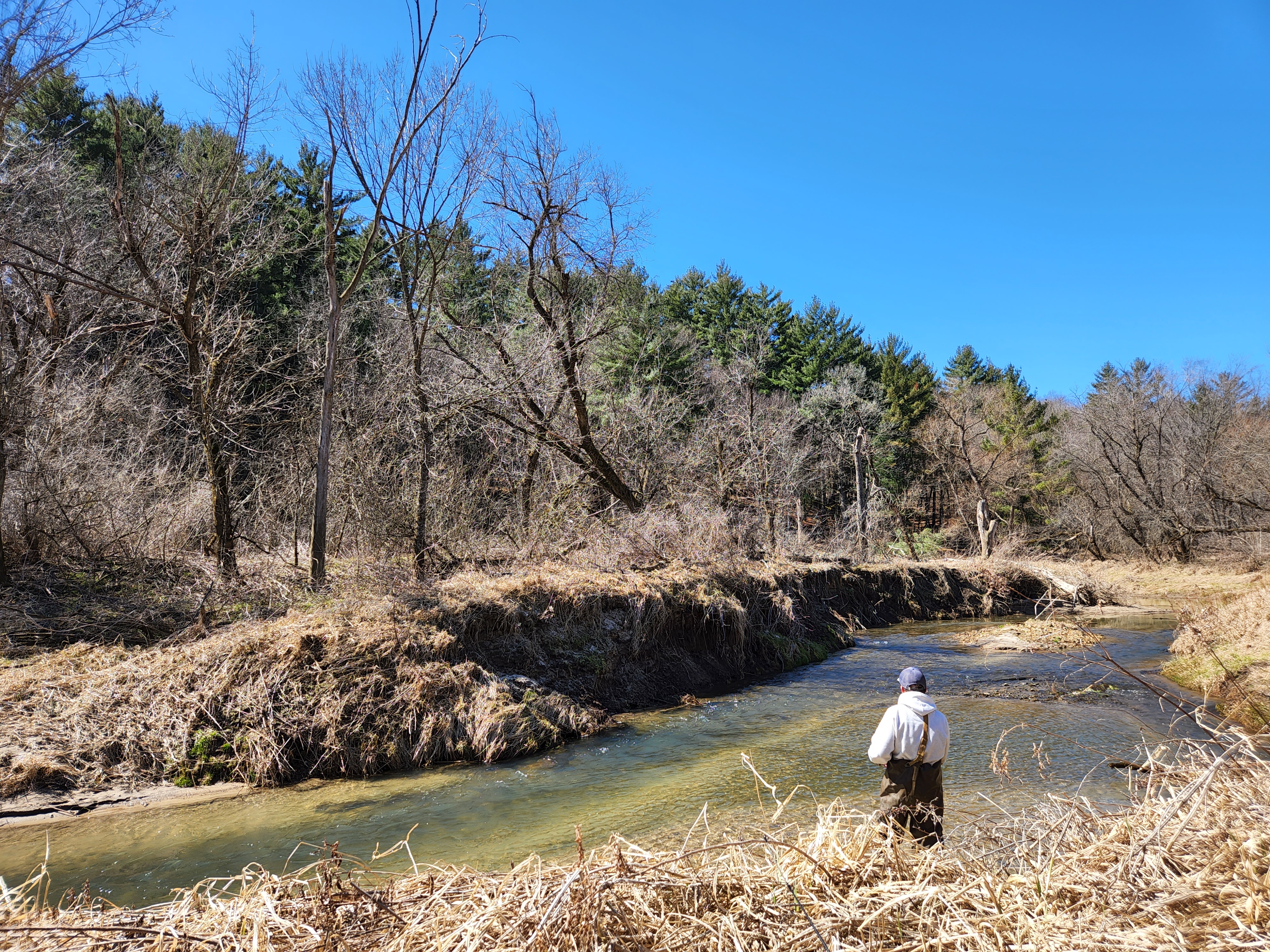 And there I stood, momentarily defeated. With a frown, I took a look around. The cottonwoods stood tall and steady. Bluebird skies cast shadows along the faded grays of this dormant valley of mute grass and brittle weeds. On a nearby ridge, a songbird cries, joining the stream’s steady speech. My frown fades, and I find myself submitting to the hypnotic hymn. The notes never change, but the sound is everlasting. I stare into the water. I see visions of trout beneath the glistening ripples. I watch them for a moment, but their still figures eventually melt into the streams – they become the same.

So, it’s OK if you are like me, a beginner fly angler, spooking fish with lousy casts. Your goal shouldn’t be to catch fish but to be humbled and fail.

I often forget that humility and failure are constants in life. I find myself foolishly thinking that I’ll grow out of it – that one of these days, I’ll put it all together like everyone else around me. But every failure is a blunt reminder of one’s ignorance, pushing that fantasy further out of reach.

So, it’s OK if you are like me, a beginner fly angler, spooking fish with lousy casts. Your goal shouldn’t be to catch fish but to be humbled and fail. To learn and grow. Watch the scenery, listen to the stream and let your mind wander for a moment, no longer tethered to daily responsibilities and stressors. Focus on the freedom that brings. Think about the history of the land and the people who lived there before you. You aren’t the first to explore these waters and, hopefully, you won’t be the last. Surely these streams and rivers have witnessed humans fail and succeed for thousands of years. Failure is woven into this complex tapestry, right at home with the rounded rocks and the rising trout. Stay persistent and, eventually, the waters reward you.

Erik Holterman is concluding his first year as a general officer with the University of Wisconsin-Stevens Point BHA collegiate club, and he is looking forward to expanding his leadership role. When he is not working toward his degree in natural resource planning, he is thinking about or, preferably, chasing public land whitetails with his bow.

This article first appeared in the Fall 22 issue of Backcountry Journal. Join BHA to get 4 issues a year right in your mailbox.