Lending a much needed helping hand 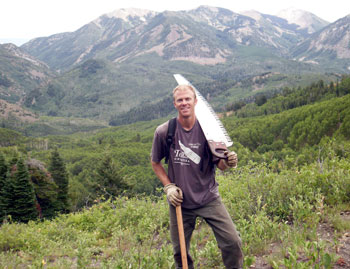 On Aug. 3 and 4, hard-working volunteers cleared a previously lost portion of trail through Little Elk Basin in the West Elk Wilderness of the Gunnison National Forest.  Dave Schelle, Tony Prendergast, Stephan Grabner and Adam Gall used cross-cut saws, hand saws and axes to clear the trail through the beautiful Little Elk Basin out to the wilderness boundary in the headwaters of Second Creek.

They worked in conjunction with the U.S. Forest Service and Vic Ullrey of the Paonia Ranger District, who provided most of the tools.

The budget for a trail crew on the Paonia District has been essentially reduced to the point where there is no more trail crew to maintain public trails.  The volunteer effort was motivated by this fact which is occurring on a national level, as well as the importance of getting the public back into their public lands.

For those interested in volunteering some time and sweat to help clear trails in the future, feel free to contact Adam Gall at 527-5430. It's a rewarding, honest and locally important cause.