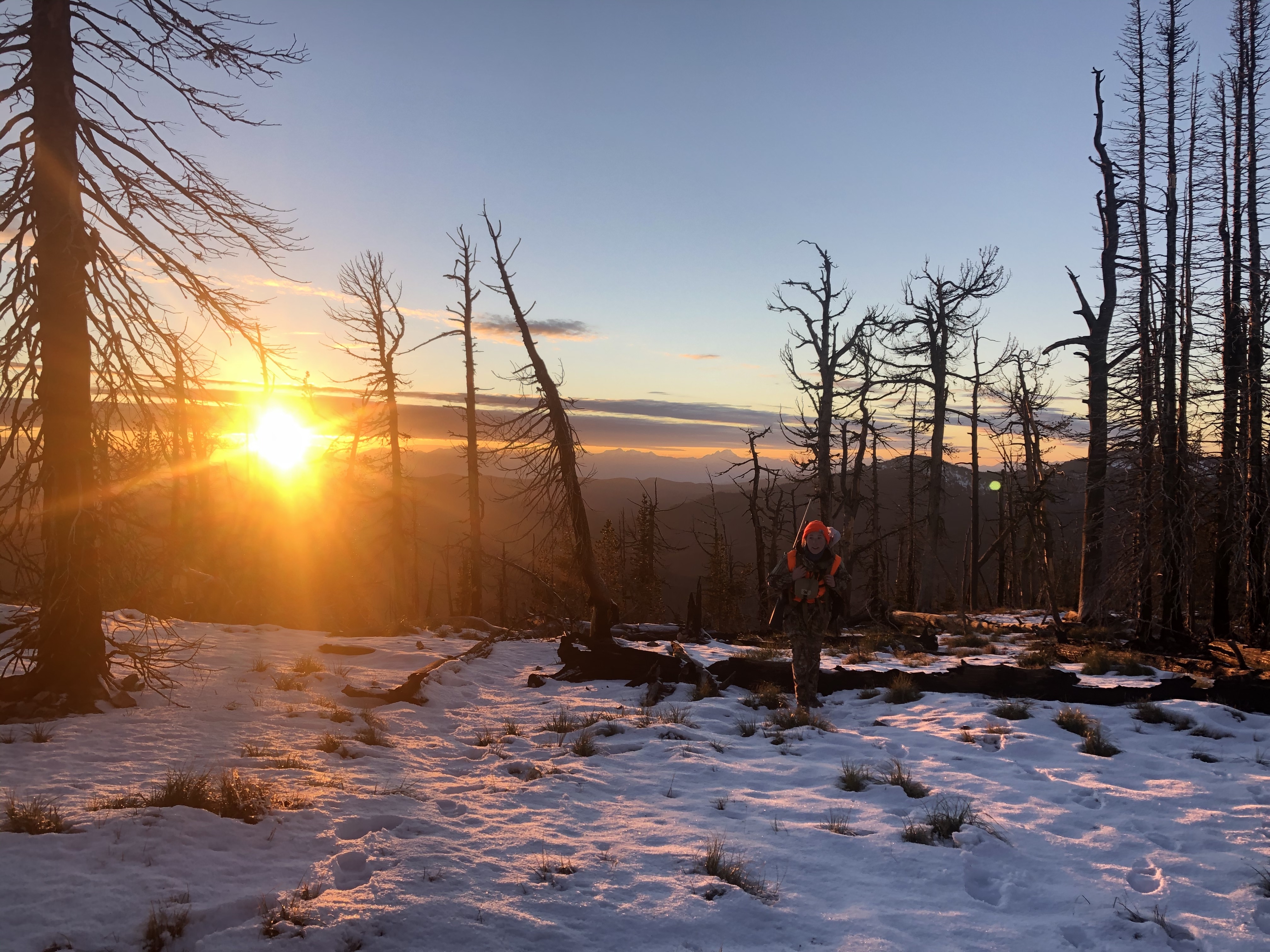 to mentor for others through BHA’s R3 work.

I grew up in the suburbs of north Houston, far away from the Montana culture of field-to-table harvest in which I am now immersed. Though I loved wildlife and the outdoors, I did not come from a hunting family and was never exposed to the idea of fair-chase hunting on public lands. A burgeoning career in wildlife biology brought me to the Rockies, studying species like mule deer and elk, and I moved to Missoula in the autumn of 2019 to study at the University of Montana.

I was interested in learning to hunt but assumed it would be years before I was able to hunt myself. After all, I didn’t have the gear, a rifle or the know-how to harvest an animal. It was at a BHA collegiate club meeting, where I was just hoping to connect with others interested in hunting, that I heard about the Rebecca Romero Hunting Legacy Award – a BHA and The Wildlife Society scholarship created by the Romero family after Rebecca, a former BHA UM club member and new hunter, was tragically killed in a hit and run accident. Though doubtful of my ability to undertake my first hunting season so soon, I submitted my application. To my surprise, I was selected, and my life was forever changed.

I realized that hunting for my own meat was a real, feasible option for me – a young woman from the suburbs who had never owned a gun.

That fall, the UM club helped connect me with the gear and mentorship I needed to get out hunting, and I was incredibly lucky to harvest a mule deer buck on the banks of the Missouri River. In the moments after I pulled the trigger on a living thing for the first time, I watched my buck fall to the ground and sat in the profound silence of my ringing ears. I felt so many emotions: grief, gratitude, pride. I learned to quarter my deer in the field and butcher and package him at home. I learned to prepare and cook his meat and fell in love with the sense of purpose I found in the process. I realized that hunting for my own meat was a real, feasible option for me – a young woman from the suburbs who had never owned a gun.

The following year I became an officer for the UM club and discovered my passion for sharing hunting opportunities with others – as I went through the Romero scholarship process again, this time as a member of the selection committee. Though still a relatively new hunter, I started hunting on my own for the first time. I spooked deer, struggled to find bucks and failed to capitalize on opportunities one way or another, learning valuable hunting lessons at every step.

Teaming up with another past Romero awardee, Nicole Ballard, I finally harvested an elusive whitetail buck and helped Nicole kill her own mule deer buck. We celebrated our capacity to hunt successfully as two young women in the woods, still relatively new to the sport, and my confidence and love of hunting grew.

This past autumn, I stepped into the role of hunt coordinator for the UM club and directed my efforts towards sharing hunting experiences with new hunters. I spent countless hours organizing the Montana Hunter Mentorship program, a partnership between the nonprofit MHM, directed by James Goerz, and the UM BHA club. MHM connects hunting mentors with those interested in learning and provides a place for all of us to gather and hunt at the Goerz lodge. I helped select another group of Romero awardees and connected them with gear and mentorship – much as I had once connected. My days were filled with flurries of emails, planning food logistics and corresponding with potential mentors and mentees. As the pieces came together and the season unfolded, I was filled with satisfaction watching hunters new and old from all over the country learn together in the woods, listening to stories of incredible moments afield and enjoying the fruits of successful harvests.

A couple of hours later, I finished hiking out my first load of meat and reveled in the intensity of the experience, the honor of harvesting such an animal, and the pride in having the capacity to do it by myself.

After a busy first few weeks of the season managing MHM business, I shifted my focus to my own hunt. For this, my third season, I once again pushed the boundaries of my own capabilities. The weekend before Thanksgiving, I set out alone and encountered a group of mule deer high in the mountains. After a slight bit of intervening chaos, I set my sights upon a magnificent mule deer buck and fired one round. The weight of my harvest hit me again as I approached this monarch of the mountain. The adrenaline faded in my body and the urgency to begin the task ahead grew. 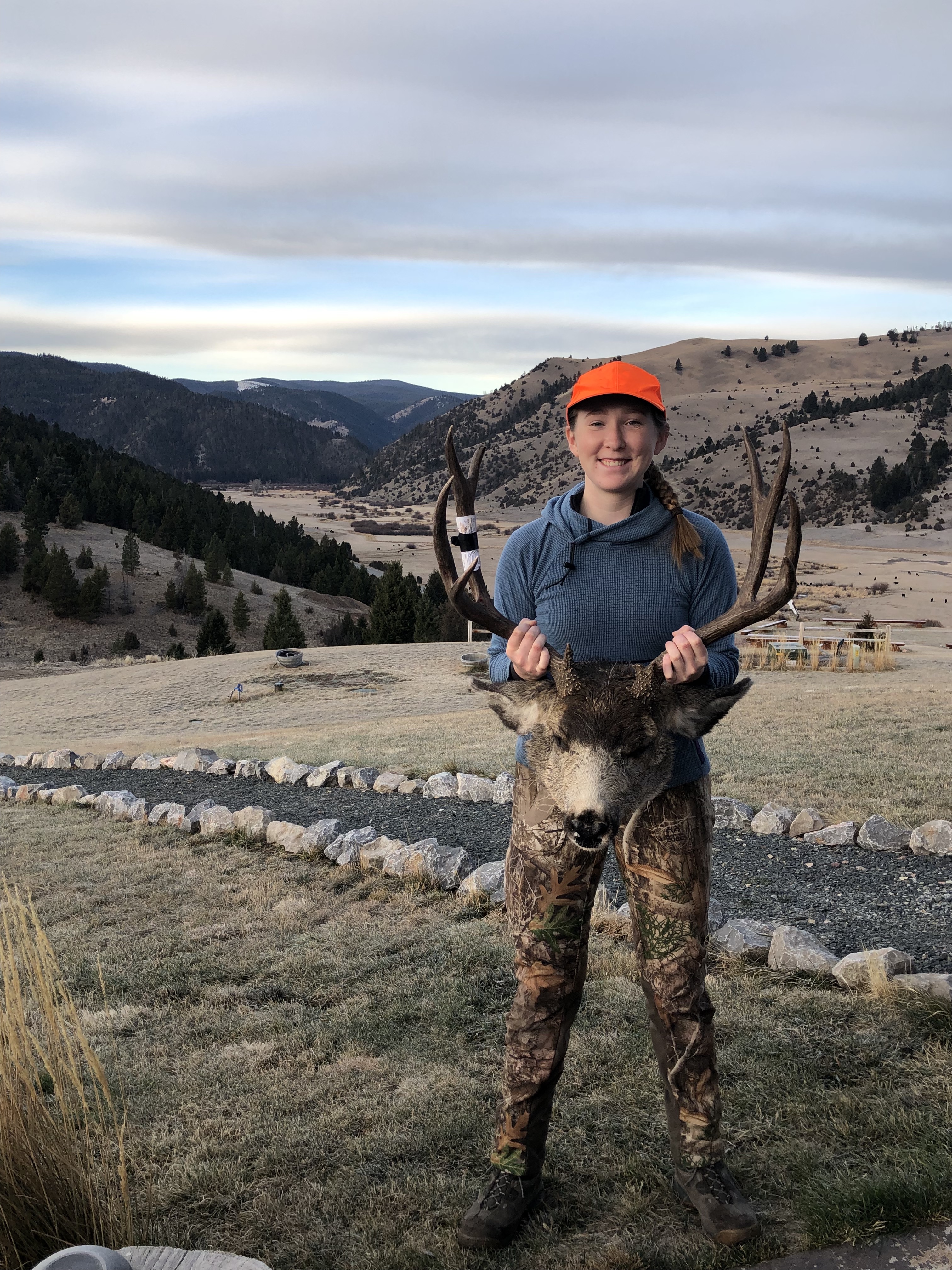 I quartered my buck on the mountain, struggling to exert every ounce of power that my body possessed as the light faded into a spectacular sunset and spruce grouse roosted in the tree overhead. After loading my backpack in the dark, I fought through a brief but nerve-wracking bout of disorientation in the shadows of night. A couple of hours later, I finished hiking out my first load of meat and reveled in the intensity of the experience, the honor of harvesting such an animal, and the pride in having the capacity to do it by myself.

As I move onwards from this hunting season, I think about Rebecca. I wish she could see the powerful women who have entered the world of hunting through her legacy. I was never lucky enough to know Rebecca personally, but my life is forever changed by the impact of her story and her family’s gift. I earn a deep sense of satisfaction in harvesting my own food and transforming an incredible living creature into delicious meals for myself and my loved ones with my own hands. The trials and triumphs of hunting have reshaped my understanding of who I am in relation to other living things and, maybe most importantly, to myself. I seek now to share this love with others, to lend the tools and the confidence to other young women who want to take their place in the food chain.

Editor’s Note: Every fall, BHA’s University of Montana collegiate club and the University of Montana student chapter of The Wildlife Society accept applications for the Rebecca Romero Legacy Hunting award, which honors Rebecca Romero’s life by supporting a cause she was passionate about. The award covers the cost of a non-resident hunting license for out-of-state students with a focus on new and female hunters.

Learn more about the Romero Scholarship

This article first appeared in the Spring 22 issue of Backcountry Journal. Join BHA to get 4 issues a year right in your mailbox.

Nicole Bealer serves as the hunt coordinator for student chapter of BHA's UM collegiate club and strives to welcome others into the world of hunting and fishing.