The Colorado chapter of Backcountry Hunters & Anglers (BHA) recently held their 10th Annual Rendezvous(June 1-3, 2018), where they recognized vice chair/treasurer, Matt Kenna, for over a decade of selfless service and untold contributions to the chapter’s public lands, waters and wildlife preservation efforts. Matt will step down from the Chapter Leadership Team (CLT) during June.

Matt lives in Durango with his wife, Janet, where they raised two sons. And although Matt would never admit it, he’s among the top attorneys in America specializing in public lands conservation issues. He has practiced law since 1992, defending the wild places we all love and increasingly need to enjoy traditional-values hunting and angling. Matt worked as a seasonal ranger for the BLM at Grand Gulch in southeast Utah during the 1980s and is an avid foot-powered elk hunter. In addition, he plays a mean blues harp and is an expert skier. 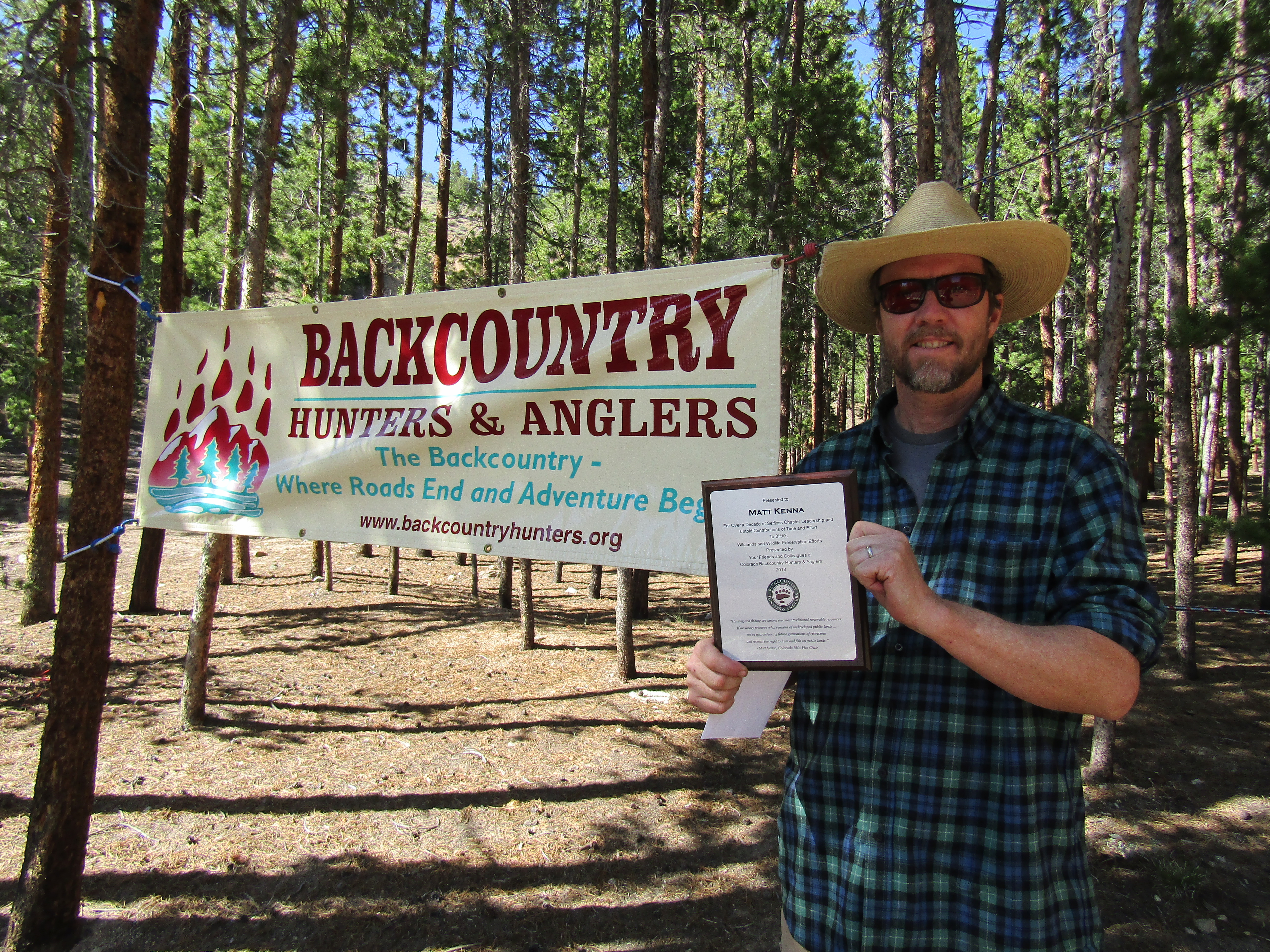 Until recently, for three generations, the Kenna family owned and operated Marlin Firearms. Matt’s grandfather bought the famous lever-action sporting arms manufacturer during the depression for $100 down and a large mortgage. “I’ve always seen hunting and conservation as two fingers of the same hand,” says Matt. “I feel privileged to have promoted these twin goals as a board member of Colorado BHA.”

Chapter chairman, David Lien (a U.S. Air Force veteran), said: “Over these 10-plus years Matt has been chapter treasurer and vice chair, I’ve had the great pleasure of both working with him on innumerable BHA-related issues and hunting elk with him on several occasions. Matt’s decade of selfless chapter leadership has been invaluable. The breadth and depth of his multifaceted expertise in many hunting, conservation and environmental-related areas will be sorely missed. Thanks Matt!! 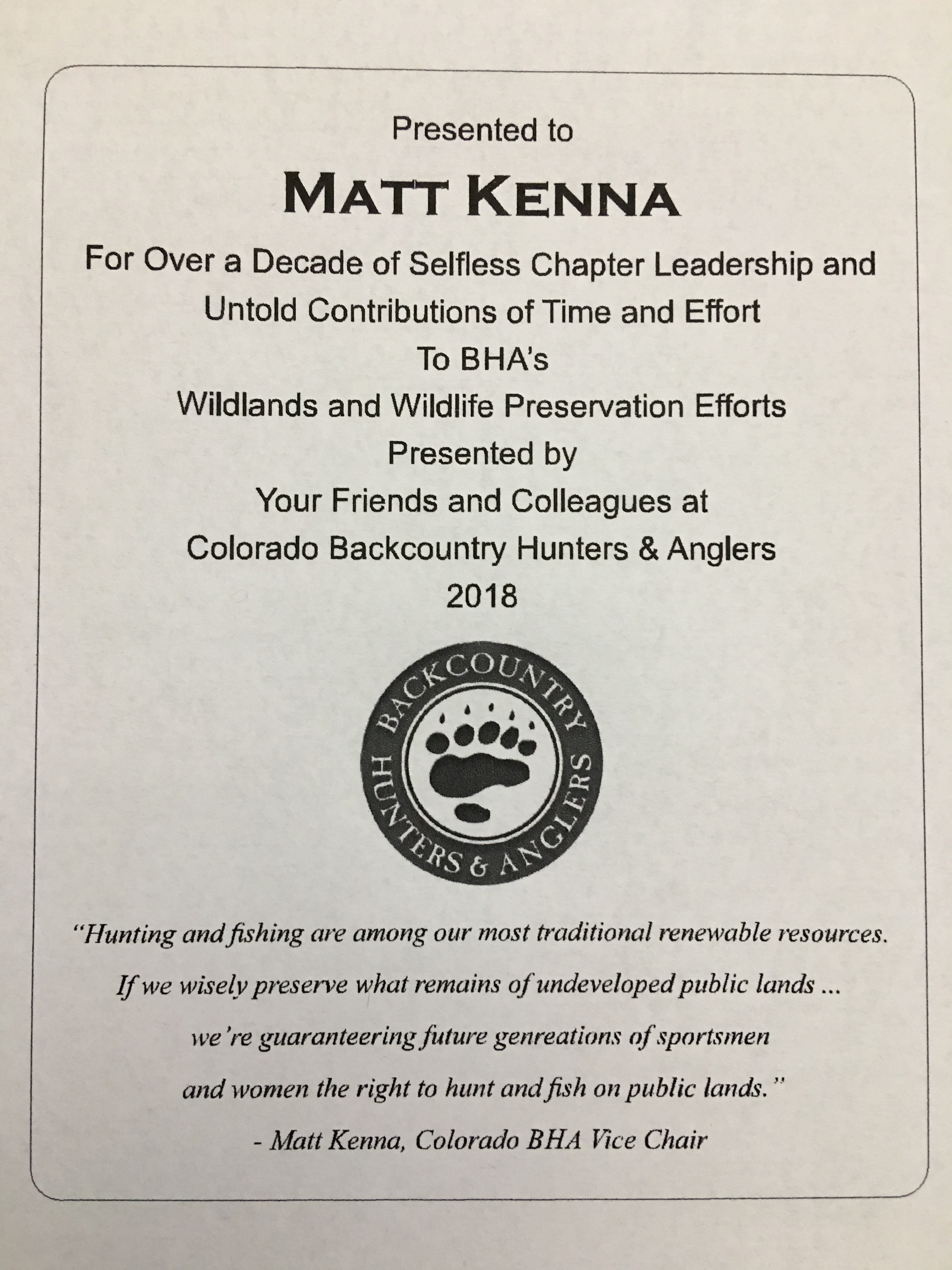 David Kinn, also from Durango, has volunteered to replace Matt on the CLT. “We look forward to working with David and commend him for volunteering to take the reins of managing our chapter finances from Matt.” For additional information on David’s chapter treasurer appointment, see: “Colorado Backcountry Hunters & Anglers Appoint Treasurer And Habitat Watch Volunteer.” Backcountry Hunters & Anglers: 5/23/18.

Founded by Mike Beagle, a former U.S. Army field artillery officer, and formed around an Oregon campfire, in 2004, BHA is the sportsmen’s voice for our nation’s wild public lands, waters and wildlife. With over 20,000 members spread out across all 50 states and Canada, including chapters in 39 states and two international chapters—in Alberta and British Columbia—BHA brings an authentic, informed, boots-on-the-ground voice to the conservation of public lands. Since the Colorado BHA chapter was founded by David Petersen (a U.S. Marine Corps veteran) in 2005 (the first official BHA chapter), they’ve grown their boots-on-the-ground presence to over 1,400 dedicated hunters and anglers.