Re: Comments on Travel and Transportation Management RMP Amendment for WRFO

Below you will find comments from the Colorado chapter of Backcountry Hunters & Anglers (COBHA), a non-profit 501(c)(3) group of sportsmen and women who share the common goal of preserving traditional hunting and angling activities and conserving our wild public lands, waters and wildlife. Our mission is to ensure America’s outdoor heritage of hunting and fishing in a natural setting through education and work on behalf of wild public lands and waters. We appreciate this opportunity to comment on the BLM’s Travel and Transportation Management RMP Amendment for the White River Field Office.

The BLM White River Field Office (WRFO) encompasses a significant portion of the range for the largest mule deer and elk herds in Colorado (i.e., the White River deer and elk herds), in addition to smaller herd units in the Book Cliffs and Blue Mountain plateau. In addition, the WRFO includes substantial pronghorn populations, numerous waterways that support populations of Colorado River cutthroat trout and other native fish species, and significant habitat for three species of grouse (greater sage-grouse, dusky grouse, and Columbian sharp-tailed grouse). Many other species of wildlife with aesthetic and/or economic importance also inhabit the WRFO, including black bear, mountain lion, and numerous small game and nongame species. 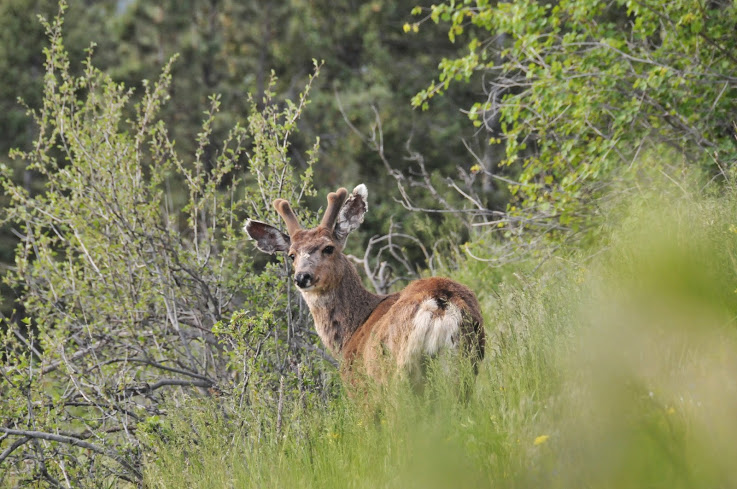 These wildlife populations are a public resource, and in the case of these large mule deer and elk populations, a resource of national significance. Hunting and angling support a $3 billion per year industry in Colorado, and rural communities in northwest Colorado depend on the annual economic benefit provided by hunters and anglers that come here to enjoy the area’s world class wildlife-related recreational opportunities. Travel and transportation management decisions currently being made by the BLM on the 1.5 million surface acres administered by the WRFO will influence these fish and wildlife populations for years to come. Our specific comments on the August 2016 Preliminary Alternatives that follow outline our suggestions to conserve wildlife habitat as well as protect opportunities for primitive, non-motorized hunting, angling and recreational opportunities within the WRFO:

1) COBHA is strongly supportive of Alternative B, but suggests modifications outlined below. We believe this is the only alternative currently being considered that adequately balances the multiple use mandate of BLM lands while still providing for some level of primitive (i.e. non-motorized) recreation opportunities and wildlife habitat free of roads.

2) Under Alternative B, approximately 11% of the WRFO will be designated as Closed to motorized use. This is an improvement over existing management (in which approximately 7% of the WRFO is designated as Closed) but still leaves room for some additional areas of consideration. In particular, our scoping comments from December 2015 identified the ~500,000 acre Piceance Basin (Game Management Unit 22) as an area in need of further consideration. Alternative B provides for no areas Closed to motorized travel anywhere in this large, contiguous area of BLM surface that is so important to wildlife, particularly mule deer. What’s more, it appears that Alternative B actually eliminates seasonal closures in two areas in the eastern portion of GMU22 identified in the existing RMP that are meant to provide for a non-motorized hunting experience. Instead of being closed to motorized travel during the hunting season, these areas will now apparently be managed to provide for 2.5 miles of motorized access per square mile. This is a huge loss for hunters seeking a traditional/non-motorized hunting experience in a large GMU where no other opportunities for primitive hunting opportunities have been afforded. We strongly encourage BLM to carry forward the seasonal closures on two parcels in the eastern portion of the Piceance Basin into Alternative B.

3) While COBHA understands and is generally supportive of the route density management criteria, we disagree with BLM that routes with seasonal closures or those routes that primarily provide access for oil and gas traffic be excluded from route density calculations. Meeting overall route density thresholds accomplishes one thing while seasonally closing a specific route for a specific resource concern accomplishes another. COBHA believes that all routes open for some portion of the year be included in route density analysis and targets. Furthermore, routes open to oil and gas activity (especially during the development phase which can last months or even years for multi-well pads) exude the same effects on wildlife (potentially more) as those open to general public use. Habitat effectiveness for big game wildlife will be reduced in areas with concentrated energy development – the science is clear on that. Ignoring those effects at the GMU level of analysis is a mistake. While we understand that road construction (and ultimate route density on the land) is a constantly moving target during intense energy development, the effects on wildlife remain tangible and negative. COBHA suggests using an adaptive management approach whereby increasing route density due to energy development be offset with seasonal or year-round closures of other routes within a GMU to maintain landscape-level density targets.

4) Our scoping comments from December 2015 recommended that WRFO identify areas for seasonal motorized travel closures in coordination with Colorado Parks and Wildlife to protect wintering big game. This does not appear to be addressed in the current alternatives. COBHA believes that managing for specific route densities is a sound and science-based approach, but does not wholly replace seasonal closures of specific areas of high importance to wintering big game. Providing a reprieve from regular human incursion into those areas is a strategy being implemented on public lands in numerous areas for the sake of reducing stress on wintering big game as well as reducing private landowner conflicts by providing refugia on public land rather than pushing animals onto private land. We believe that providing opportunities for refugia on public land increases the social carrying capacity for big game in the WRFO by reducing damage issues on private land. It is unclear if this is a requisite part of the current plan amendment or if accomplishment of this is something that will be done at the route-by-route level of travel management planning.

5) Overall, COBHA believes the management actions presented in Alternative B will be a good thing for wildlife and will also increase opportunities for non-motorized recreation, including hunting and angling, in the WRFO. However, this will only come to fruition on the ground if decisions are implemented, monitored, and enforced. COBHA remains concerned about the certainty of implementation of these actions, particularly in light of the fact that travel decisions spelled out in the 1997 RMP remain largely un-implemented. We hope that budget and staff will be dedicated to implementation of decisions in this amendment and subsequent route-by-route travel plans.

As an organization dedicated to ensuring future generations have the opportunity to hunt and fish the same quiet, wild lands and waters that we’ve enjoyed, COBHA appreciates the opportunity to provide comments on the future land management of an area that our members depend on. We understand the significance of the demand for recreational opportunities and other travel-related uses of BLM public lands within the WRFO and believe that balancing this demand with the need for quality intact wildlife habitat and areas with no roads and low road densities is quite achievable. Our comments above characterize our understanding of how this balance might be struck. We also look forward to future engagement with the WRFO in travel and transportation management planning at the site-specific (route-by-route) level of decision making.

Thank you for your work on behalf of wildlands and wildlife, and for your public service.

About Colorado Colorado BHA Chapter
share on
See other posts related to habitat Colorado BHA Colorado Issues
Get the latest news and stories, right to your inbox.
Search
Local Chapters