“We had 12 members participate in the full-day activity,” Ty explained. “Members were joined by five staff from the USFS, where we hiked in to the grow site. We spent the day destroying shelters, cleaning up trash and camping supplies, tearing out irrigation pipe and piling all items to be lifted out by a Blackhawk helicopter at a later date. All members seemed to greatly enjoy the effort, while learning a great deal from the staff and experience.” 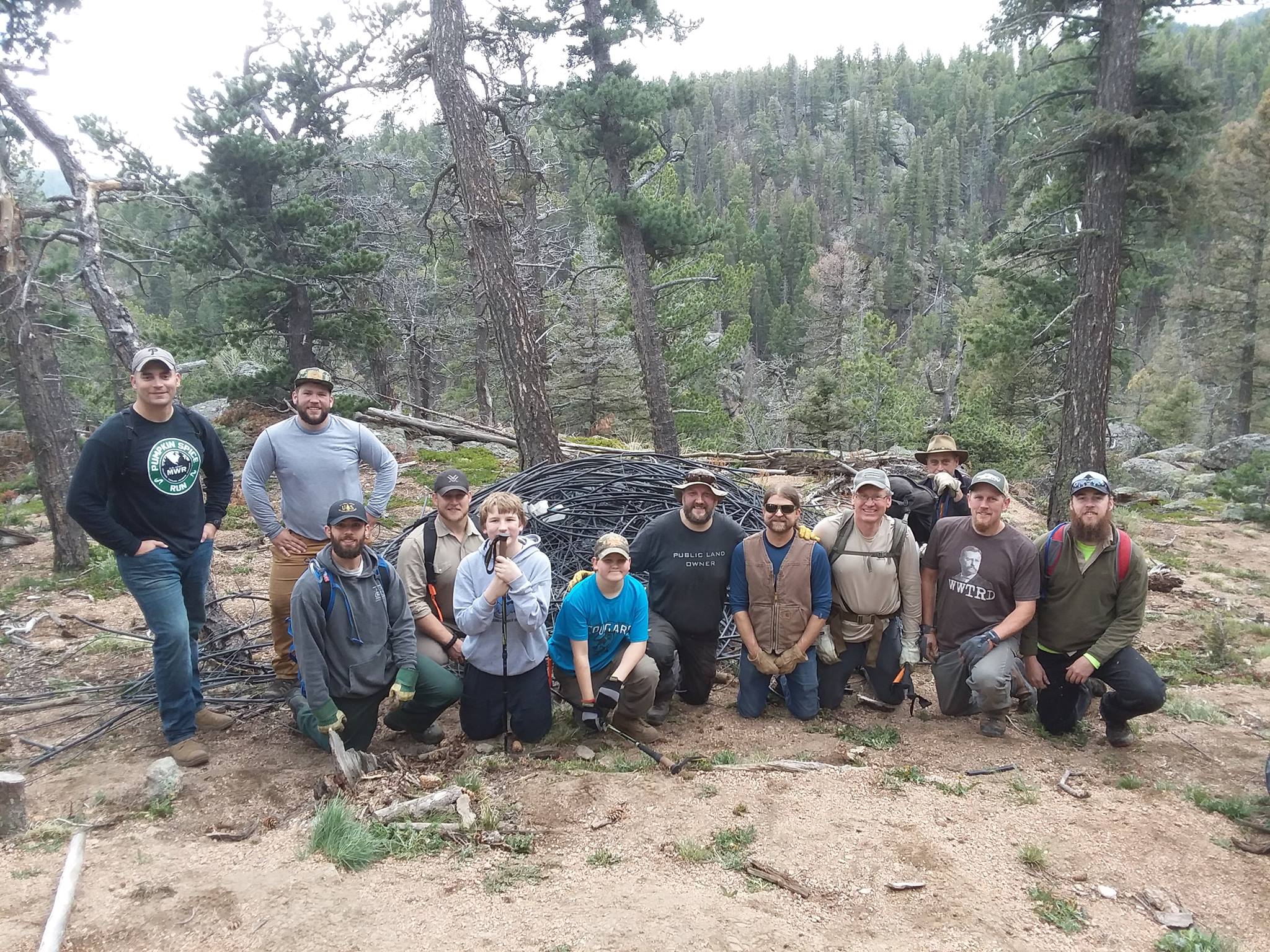 Chas Clifton, a Colorado BHA Habitat Watch Volunteer for the Pike-San Isabel National Forest, joined in the effort, and said: “We all set to work—stuffing abandoned sleeping bags with trash, tearing down the crude buildings made of fir saplings and baling wire (kitchen, sleeping quarters, drying shed), and pulling armloads of black plastic pipe from under the forest duff and fallen trees.”[1]

“I would like to give a huge shout-out to the 11 members of the southeast Colorado Backcountry Hunters & Anglers group … who donated their time on Colorado Public Lands Day,” added Ty. “These members worked with staff from the U.S. Forest Service to clean up an illegal marijuana grow site in our national forests. We learned a great deal that day about the grow sites and their impacts to our water, land and wildlife, all while engaging in rewarding work tearing down and cleaning up the site.”

Chapter chairman, David Lien (a former Air Force officer), said: “The threats to our public lands are multiplying, and BHA’s growing boots-on-the-ground army of hunters and anglers, sportsmen and women, look forward to continuing our collaboration with the U.S. Forest Service and other public lands agencies to help protect and perpetuate our great public lands heritage.”

Ty and his crew wrapped up the day with barbecue and beers, and discussed their next cleanup opportunity with the USFS staff. If you’d like to be involved in Colorado BHA’s next grow-site cleanup or are interested in joining the Southeast Colorado BHA Group email list, contact Ty Woodward at [email protected]. Also see Chas Clifton’s blog post about the cleanup (“Cleaning Up after the Cartels,” 5/20/18) in his Southern Rockies Nature Blog.

Founded by Mike Beagle, a former U.S. Army field artillery officer, and formed around an Oregon campfire, in 2004, BHA is the sportsmen’s voice for our nation’s wild public lands, waters and wildlife. With over 20,000 members spread out across all 50 states and Canada, including chapters in 39 states and two international chapters—in Alberta and British Columbia—BHA brings an authentic, informed, boots-on-the-ground voice to the conservation of public lands. Since the Colorado BHA chapter was founded by David Petersen (a U.S. Marine Corps veteran) in 2005 (the first official BHA chapter), they’ve grown their boots-on-the-ground presence to over 1,400 dedicated hunters and anglers.