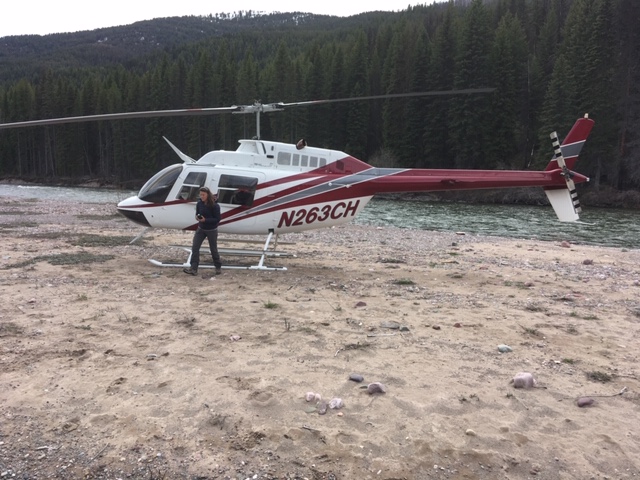 Backcountry Hunters & Anglers has issued a reward to John Morris, the Montana hunter who recently captured images of a pilot using a private helicopter to access a fishing hole in the Bob Marshall Wilderness Complex. The efforts of Morris and his hunting partner, Randy Brockman, resulted in the pilot’s conviction, qualifying Mr. Morris for a monetary award via BHA’s Reward Fund.

The million-acre Bob Marshall Wilderness in Montana is the flagship of the National Wilderness System. Under the federal Wilderness Act, motorized and wheeled vehicles, including motorbikes, ATVs, snowmobiles are prohibited, and aircraft are limited to landing in specific airstrips only. It is requested that aircraft remain at least 2000 feet above the ground when flying over wilderness areas, and that overflight request also applies to Wild & Scenic Rivers, which includes the South Fork of the Flathead.

Morris was hunting black bear by horseback in the upper South Fork of the Flathead Valley in the Bob when he saw a low-flying helicopter land on a gravel bar and two individuals fishing.

“My family has enjoyed the solitude of the Bob for three generations now,” said Morris, of Kalispell. “Witnessing a helicopter illegally landed on the South Fork completely degraded my experience. In my mind, for me, that place will never be the same.”

Morris approached the individuals, informed them they were breaking the law, and photographed the helicopter, including its identification number. He later turned over the information to the Forest Service.

Officials subsequently charged the pilot, a resident of Bozeman, Montana, with a federal misdemeanor. The pilot pleaded guilty and paid the maximum fine of $500.

Coincidentally, that is the same amount of the reward that BHA typically gives tipsters who report illegal use of public lands and whose report results in a conviction.

“While we are disappointed with the light sentence in this case, we applaud John Morris’s actions in defense of our public land,” said John Sullivan, the volunteer chairman of the Montana chapter of BHA. “We cannot have two sets of rules for public land – one set of rules for regular folks who obey the rules and another set for folks who can afford to cut to the front of the line with a helicopter.”

When news of the violation became public, it triggered a storm of outrage in the social media. The pilot issued an apology letter claiming he was lost and unaware he was in a wilderness area. Nevertheless, it remains illegal to land a private helicopter on national forests outside of airstrips, without OK from the district ranger, regardless of whether the land is wilderness.

“We hope this is a learning experience for the pilot and for any other pilots who think they can flout the law and take advantage of the law-abiding public,” continued Sullivan.

Sullivan expressed disappointment with the size of the penalty, which he noted amounts to less than one hour of rental time for a typical helicopter flight. Still, Sullivan said the incident would have escaped notice entirely had it not been for Morris.

“The Bob Marshall Wilderness is among the most famous and beloved piece of all our public lands,” Sullivan said. “If we cannot protect it from illegal abuse, then what can we protect?”