When I decided to try out hunting, my only real goal was to get into the woods. At most, when I strained my imagination and desires, I knew that one day I wanted to take down a big game animal with a traditional bow. But without getting ahead of myself, I needed to find a species to target which I could come across easily, cheaply and with some chance of success. While to most seasoned hunters reading this, squirrel hunting probably is the “No, duh” answer, for an adult onset guy starting out it honestly didn’t hit me that way.

However, after doing much research and consulting my state’s fish and game guidelines (I was living in Illinois at the time), squirrel were pretty much the only critter it made sense to target. Thing of it is, I never guessed how much I would love squirrel hunting. It truly is an underrated game animal. Regardless, in my research, I kept seeing references to giant fox squirrels. What the hell is a fox squirrel?! I thought. Growing up in the suburbs of Chicago, I could only recall having ever seen small, grey squirrels. For whatever reason, I became convinced in a mythical “Fat Fox Squirrel of the South”.

After moving down to Tennessee shortly after beginning my hunting career, I have learned that, in fact, the true ‘cryptid’ is the “Fat Fox Squirrel of the North”; that is, there are very few fox squirrels down South—and that I had seen numerous specimens of them when visiting family in Northeast Indiana over the years! Moreover, as I inquired relentlessly about fox squirrels in Middle Tennessee (even venturing calls afield further into the South), I discovered that a great deal of misinformation exists about fox squirrels. Indeed, myself and others have even been duped into thinking that rust-color phase grey squirrels (yes, these exist) were fox squirrels!

While I will explain the situation further, I want to note something; it is so magical that a species which folks can readily target can be so foreign, exotic and exciting to even people living in that region! One of the great joys of public land hunting is that there is always something new over the ridge top to surprise us.

After my first season in Tennessee, however, I knew none of this. I still believe in a so-called “Fat Fox Squirrel of the South”. So proceeded to ask friends, colleagues and especially other hunters in parking lots.

The answers I received could not have been more varied, both emotionally and factually. I got responses that ran the gamut from “Why the hell are you interested in those” to “I love fox squirrels”, to “what are you talking about” to “Oh, fox squirrels, yea I see those all the time”. Notably, the final response usually involved an explanation of the locale being farmland. This would explain why I wasn’t seeing any—both my deer and squirrel hunting I tend to confine, right or wrong, to hardwood stands. In any case, until I actually saw a fox squirrel, I came to believe that I may have killed a fox squirrel before! Some folks were under the impression that any orange or rust-colored squirrel, regardless of size, was a fox squirrel. In fact, I became convinced of this, which meant that in fact I had killed multiple fox squirrels in Wisconsin and that the first squirrel I ever killed was a fox squirrel. Most disappointingly, it meant that the legendary, large fat squirrels did not exist. 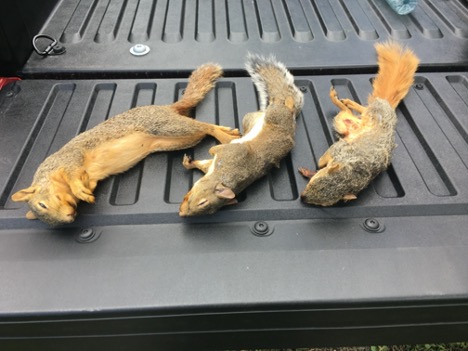 However, the first day I sat a tree deer hunting in Tennessee, I saw a fat fox squirrel with the distinctive facial markings I had been looking for! Although I did not kill a deer that day, I would not have traded the experience of watching this unique critter for a deer kill. I watched the squirrel slowly move around the canopy for a half hour before it slunk off. Boy, do they move differently from grey squirrels!

A few weeks later, I needed to spend some time on my feet and get out of the tree. I decided to go squirrel hunting. I headed to the same WMA, though in a very different area. After a successful morning, around 10AM I decided to keep hunting. I ended up hearing and seeing a squirrel very high up in a tree. After an initial shot, it went running—but it ran right above my head! I swiveled my shotgun and took a shot, around 25 yards almost directly above my head. Like a meteor, a colossal orange ball came hurtling down from the tree limb. Once I saw its outline, I could not believe it—it was indeed a fox squirrel! 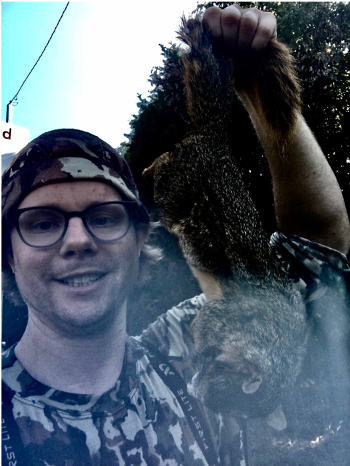 I now had proof positive that fox squirrels existed. With this proof, I went on another research mission, during which I learned:

-In Tennessee and Alabama, fox squirrels used to be common, perhaps some 30 years ago. However, now they are almost invariably found on ag land. Sitings in public forests are not impossible, but hard to come by. I still have not received any solid intelligence on what sort of public land to hunt them in Tennessee.

-Fox squirrels are much more common up North! In fact, in Northeastern Indiana, where my mom is from and I have visited multiple times a year every year of my life, fox squirrels predominate! They’re everywhere, and seem to outnumber grey squirrels. It’s interesting, the things that escape non-hunters about the world around us. When I went squirrel hunting up there, they largely predominated.

-There are subspecies of fox squirrels. The notable facial markings on the squirrel I killed, and which so fascinated me and everyone I know in Illinois, are indicative of the Bachmani Fox Squirrel. The fox squirrels in Indiana look like Eastern Grey Squirrels, with the exception of their larger size (and different behaviors).

I have yet to encounter another fox squirrel in Tennessee this year, though not for lack of trying. However, given my conversations with WMA managers in both Alabama and Tennessee, I have to wonder—given their rarity in the woods, would I shoot one again?

About Nick Hendricks
share on
See other posts related to Tennessee News
Get the latest news and stories, right to your inbox.
Search
Local Chapters