Two in the Far North by Margaret Murie

Sen. Martin Heinrich recommended this book to the BHA staff, and it has since become one of my favorites. 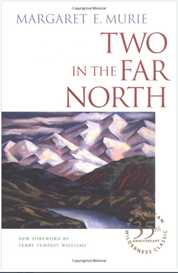 In an incredibly moving memoir, Margaret “Mardy” Murie transports us back in time to the turn of the 20th century in Alaska, where the journey begins on the Tanana River and then to Fairbanks where she spent her childhood. We float along the Koyukuk River as she marries Olaus Murie, a biologist for the U.S. Biological Survey (now U.S. Fish and Wildlife Service), then later up the Old Crow River with her eight-month-old Martin in tow, helping Olaus band geese and document caribou. Most memorably, we join her for a summer spent on Lobo Lake and Last Lake in the Sheenjek Valley – the catalyst for the creation of the Arctic National Wildlife Refuge and inspiration for Mardy’s future work on behalf of wilderness.

Murie's love of Alaska shows in her intelligent and joyful prose that paints imagery so rich it makes you feel as if you were there. Her passion is felt as much in these pages as it emerged in her later years working tirelessly as a wilderness advocate. Her vivacity and optimism are infectious, her strength and independence inspiring. In a time of so much doubt and uncertainty about the future of our wild places, Two in the Far North will leave you optimistic, with a renewed conviction to fight for the last untouched places on earth.

“When I think about that return to the part of Alaska which has meant so much in my life, the overpowering and magnificent fact is that Lobo Lake is still there, untouched. Last Lake is still there, untouched. Although the instant you fly west of the Canning River man is evident in all the most blatant debris of his machine power, east of the Canning the tundra, the mountains, the unmarked space, the quiet, the land itself, are still there. Do I dare to believe that one of my great-grandchildren may someday journey to the Sheenjek and still find the gray wolf trotting across the ice of Lobo Lake?”

Murie's words beg: What will you do to ensure your grandchildren can get lost in the adventure, challenge and solace of these places?

Purchase Two in the Far North on Amazon Smile, and register Backcountry Hunters & Anglers as your preferred nonprofit to give back to your wild public lands, waters and wildlife.