My friend Steven Locke and his buddy Kenneth came down to hunt around middle Tennessee.  After some unsuccessful tries on Public Land, we headed out Saturday morning to the place in Dunlap where I had been a couple days before.

We parked and started walking and calling every now and then.  We finally struck a turk off to our left.  We quickly set up our decoys.  Locke and Kenneth had to lay on the side of the road on their bellies like they were waiting on Yankee Troops to come over the rise.

The bird gobbled steadily for what seemed like an eternity but was probably about 15 minutes.  He didn’t even seem to be moving!  After another eternity of silence from him, we whispered to each other “What happened? Where’d he go”?

Just as we were about to discuss what to do, he roared!  Closer.  We quickly resumed our positions.

A few minutes later, a hen appeared about twenty yards down the road to our right.  Then, a few more hens appeared.  They started clucking at our decoys as if to say, “Who are y’all?”

Then we heard it…

The feathered, bearded, barrel-shaped dinosaur stepped into the road following his harem.

He glanced at the decoys and quickly decided that these newcomers would not be welcome.  He dropped to half strut and marched right toward the jake decoy.

But he didn’t make it there.  Kenneth let that Benelli work at just twelve steps.

We celebrated with each other from sheer adrenaline.  It was Kenneth’s biggest bird (12” beard, 24 lbs., 1 1/8” spurs) and I think I was just as excited.  Locke was pumped too as he had never experienced a proper turkey hunt. 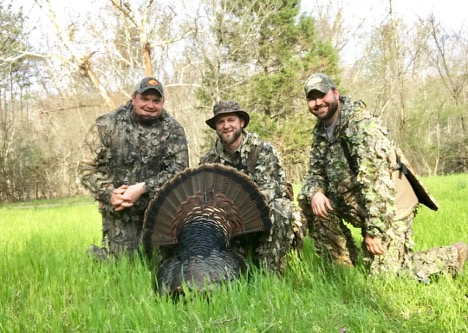