To the Top and Back 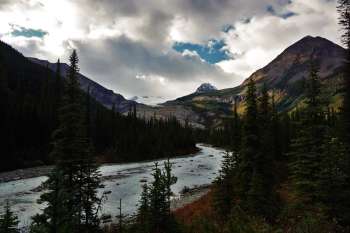 Beautiful country, but just plain nasty weather. That was the sum of my thoughts on a mountain goat hunt I was guiding. To say it was wet was an understatement; if the rest of the season went like this I wasn’t going to need to shower anytime soon, I’d just need some soap. We were glassing a lone Billy from the bottom of the valley floor, and the climb to get to him was looking more and more disconcerting. If you’ve hunted the high country, you know what kind of day this was. Fog was rolling in and out, rain was turning into snow and then back again, all in all, the Weather Gods couldn’t make up their minds. Matter of fact we couldn’t make up our minds either. By the time we climbed up there, it might have fogged in to the point where we couldn’t see 20 feet. Maybe we should kick back and wait a day for the weather to cooperate. Oh yeah, maybe I should say who “we” are.

There were three of us on this hunt, my hunter, Rick who hailed from Pennsylvania, my head guide Corey, who had graciously offered to tag along just for the hell of it (his first hunter of the season was coming in a couple days), and yours truly. We had taken a walk up the same valley to spot some goats the day before and had seen a couple including the Billy we were currently looking at. The weather had been about the same and unfortunately, the forecast was not looking much brighter. So here we were, wetter than a whale’s armpit, wondering if we should take the plunge (or the splash might be a better descriptive word).

We were located in a very remote valley which ended in a gorgeous cirque basin with a lot of glaciers in the back. A small glacial river flowed along the bottom of the valley, its waters a constant grey color due to all the sediments from its icy source. We would usually hike in along the creek bottom and glass up to the top of the mountains. The multiple basins above the timberline provide great habitat for its shaggy habitants and usually you can spot a few goats every time. Once we located a goat we would distinguish whether it was a Billy or a Nanny, and if it was a good, mature Billy, we would go after it, often camping out on top of the mountains.

I looked up at the Billy and then at Corey who was intently glassing the goat. “Think we can do it?” I asked, “I think it’s worth a shot, he’s bedded and the weather looks like it’s going to stick around the rest of the week anyway.” Corey, who’s always ready to hike, instantly agreed. Rick, who was stoked to go and was showing it in every way possible, also gave the OK. The next few hours made all of us question our decision.

We started our ascent of the mountain, taking a break every now and then. We scrambled through alder slides, getting even more soaked until we finally slipped into a band of timber that led to the timberline. If the goat was still bedded in the same spot, the timber we were in would give us cover close enough to get a shot. Between the wet vegetation and the constant downpour we were drenched. The timber was definitely less thick than the alders but it was very steep. Occasionally a rock outcrop would force us out of the timber and back into the alders.

Finally, we were getting into the more scrub timber that characterises the timberline but Rick was making some strange noises to put it lightly. The poor guy was puffing so loud, Corey and I were getting concerned. Here we were, three quarters the way up a mountain in very remote country in less than favourable conditions, with our hunter who was not used to this kind of country, and to his credit, was 68 years old. Every once in a while, one of us would ask how he was doing and the answer was always the same. “I’ll be fine, if you give me enough time, I’ll make it up there.”  Rick really wanted his goat. When I had picked him up, he said this was probably his last extreme hunt and he had gone for goat before in Alaska and while his son had tagged out on an 8 ¾ inch Billy he had gone home with an unfilled tag. Rick is the kind of guy that anyone would enjoy hunting with, so I really wanted to get him his goat.

As we make our way along to the timberline I was constantly glassing ahead in case the goat had moved. Finally we approached were we should have been able to see him in his bed. We looked high and low and nothing! Its cases like this when you really question yourself if you made the right choice. Here I had dragged a 68 year old hunter up a mountain after a goat that was not there anymore, and I don’t know if he can hike up another mountain after this trek. After we had double checked and took a break, I decided we would travel along the timberline to get a better viewpoint in case the goat had headed up into the cliffs. As we walked along, the rain turned into snow and the fog moved in. I was really questioning our luck now. It looked like we might not be able to see 20 feet soon, let alone spot a white goat in the fog.

However its times like these, once in a while you catch a break. For whatever the reason, Lady Luck took pity on us. I looked up and saw the white rump of a goat about 200 yards away from us on the shale slide. We instantly dropped down and I quickly glassed the goat as it turned around. A Billy! And a nice one too! And not the one we had originally seen! I shrugged my pack off and got Rick to rest his rifle on it and wait for a shot. As I reminded Rick to shoot low as we were in very steep terrain, the goat walked around a scrub tree and then right out in the open broadside. We might be wet, cold and uncomfortable, but the goat definitely wasn’t! He strolled along in his fancy fur coat perfectly adapted to the conditions and in no hurry until he spotted three odd looking rocks below him. He wasn’t quite sure what to make of us. This area has few human visitors at the bottom of the valley and at the top, well, it was unlikely this goat had ever seen anything human before.

While the goat was lost in thought broadside (maybe he needed a GPS… sorry, terrible joke!), probably wondering what we were, Rick sent off a warning shot, to you know, just keep it fair. The goat took off and Rick sent off a second warning shot. I thought this was a bit odd as he had been excellent shot on the range and didn’t seem to have buck fever, until I noticed the second shot was about a foot over his back. Quickly I told him to shoot lower and the next two shots were right on and he dropped (the goat, not Rick).

As if this wasn’t exciting enough, the goat dropped and started rolling down the steep shale slide and directly towards a 40 foot cliff that ended in 10 foot alders. As I sprinted towards the goat, I hoped I wouldn’t catch the horned end of him. That could be embarrassing.  Luckily I didn’t and with the help of Corey, secured him and dug out a resting place for him.

Rick was somewhere between stunned and ecstatic that his dream hunt had finally come true! He started to shake our hands but it just ended up in a bear hug; those guys from Pennsylvania I tell you … just kidding, we were just as stoked! As we examined the goat, we found he was about 7 and half years old, and at 9 ¼ inches was a nice mature Billy, maybe not the biggest goat on the mountain, but we sure earned him! It was about now that we realized that the sun was out and there was a big rainbow behind us; the weather had done a complete 360 to top it all off.

We quickly took pictures and prepared the goat for the trip down. As I loaded the cape and meat into my pack, I mentally thanked the goat for what he was giving us. Not only meat and horns for the wall, but the challenge of meeting him on his own ground, for the purpose it gave us in braving the elements of the mountains, the adventure of it all and making us feel more alive than we ever would in the more civilized country.

The terrain in which these goats reside is unreal, and is full of beauty and excitement for those with an adventurous spirit. I know I’ll be back, even just to visit the peaks where these majestic creatures call home, for hunters like us always have a calling to come back into the high country in which we have come to know, and in which we have come to know ourselves. We are truly blessed to still have wild spaces to travel and explore. Long live the wild country and those who appreciate it!

About Tom Kotlarz
share on
See other posts related to Backcountry Stories, The Campfire
Get the latest news and stories, right to your inbox.
Search
Local Chapters