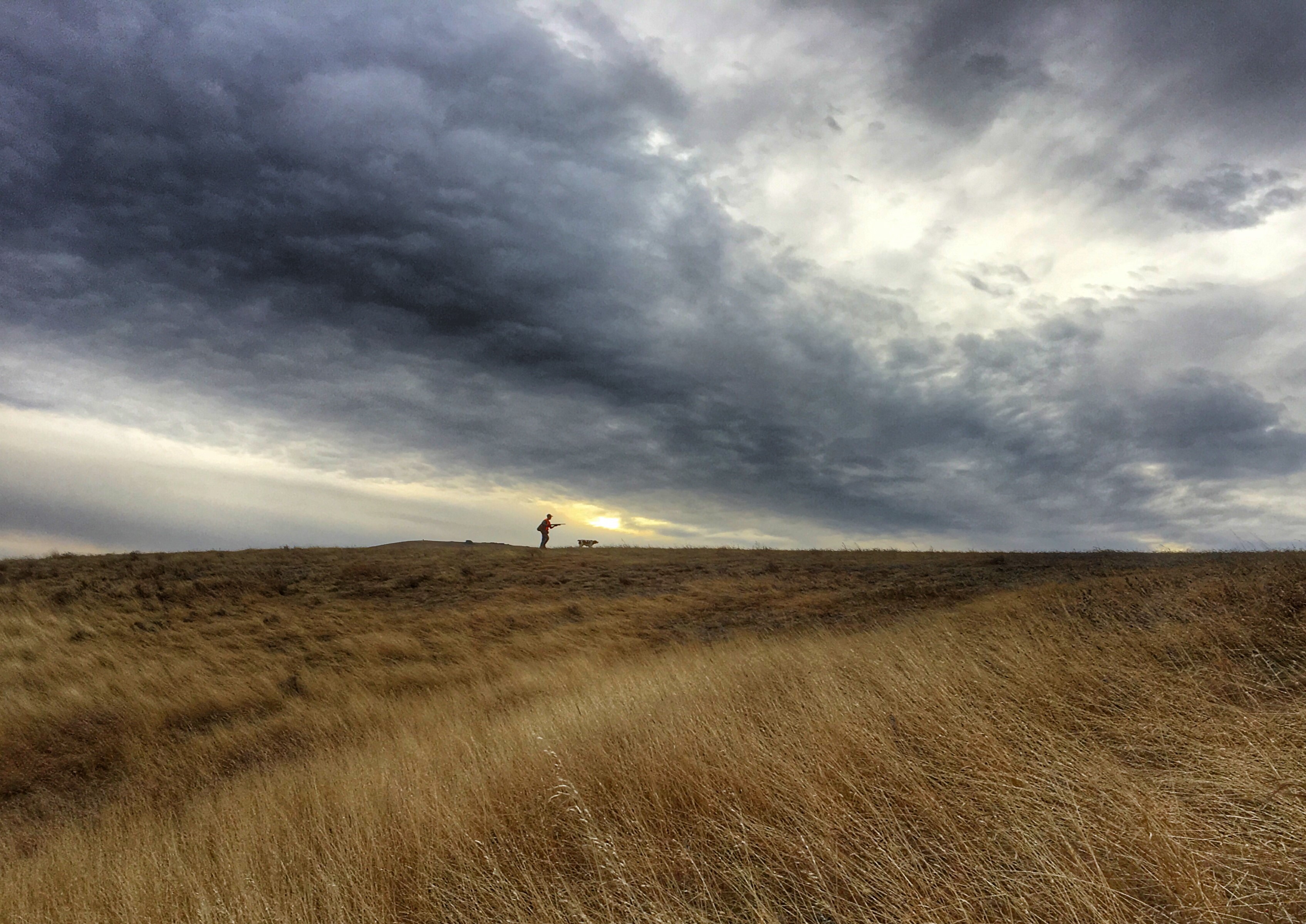 This article originally appeared in the fall 2020 issue of Backcountry Journal.

As a young man I once stood on a mountain ridge so beautiful that I now find it impossible to describe. It was summer and a bird dog was at my side when I discovered the place that would change my life and come to be part of my very being. Like a military bootcamp, it broke me and then built me back up – wild, harsh and unspoiled by the hand of man and owned equally by all citizens of this country.

Soon after I adopted this place as my spirit home, it came into the sights of energy companies – another place for them to profit from one fossil fuel or another. Those big companies had guys in very nice suits to infiltrate the highest halls of government. And between those fellas with the Italian ties and the former energy bigwigs in the executive branch, they cooked up schemes to roll dozers and derricks into my sacred spot. I came to find out that my story was one of many. The only things that changed from one tale to the next were the actors who played my role and the location of the wild land. The rest of the script was the same. Sequels are playing out from the sagebrush steppe to the canyon country still today.

I became a fighter and a student of the fine print. A purveyor of press conferences and pithy quotes in national newspapers. A lobbyist. A student of Ed Abbey. A political animal. I sharpened my existence and my tongue. I assessed what mattered, pressed my shoulders into saving it. Of course, politics were involved. I figured out how to engage in battles and win wars. I committed never to shy from either.

Those were the days that wiped the crust of naiveté from my eyes. From that time on, politics and policies have never left my consideration because their impacts never exit my days. I’ve known people who say politics don’t matter or that they are overplayed or that people like me care too much. I don’t buy a bit of that drivel. I say your politics is a window to your soul. What you care about and how much you care about it can be seen through your political window like an old gas lamp on a pitch black night. 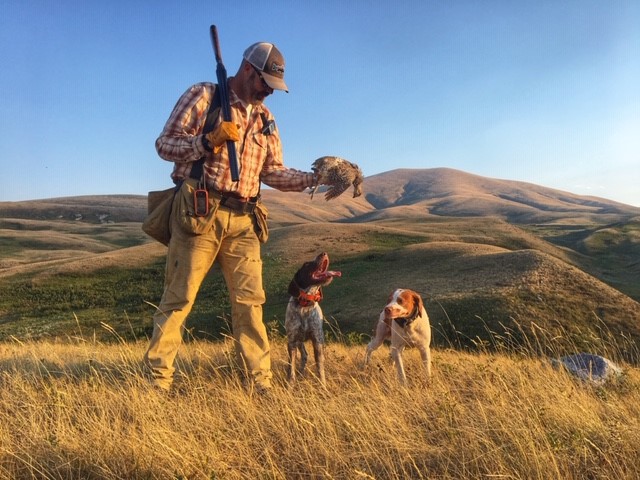 I care about wild places and losing myself within them. That’s probably why I love bird hunting so much. My politics and life are one and the same, and nowhere is this more evident than during bird season. In other words, if someone wanted to do a political profile on me they’d just need to follow me around for a couple days in October.

On an average day you’ll find me hitting the road early, before anyone else is up, headed to a remote chunk of public land. I’ll drop the dogs, and we’ll be gone for hours, maybe all day. I’ll rack up 10 miles or more, and the dogs will do 30. I like big tracts of wide-open country. Unspoiled. The less human intrusion the better. I feel alive in the vastness. I am an explorer of my own land. I like going where others won’t. I imagine people in far off farmhouses looking at me through binoculars, muttering at my stupidity, before they go back to watching the news and drinking coffee. I imagine some of them voting for people who want to sell these places, and my anger drives me up the incline.

I’ll stop to examine grasses or flowers. I watch deer and elk. I hope to see a badger or a northern harrier. If I am not lost in admiration for this place, I am laser focused on my dogs and the terrain. We hunt wild birds first and always, and they require tenacity. My dogs have never even smelled a bird from a pen. I hope to keep it that way. I tell myself that if I depend on wild places, I am more likely to fight for them.

I stand and watch as a sharptail rises from a point. I pass on the shot and just watch him flap a time or two, then hear him cluck as he starts to glide. I watch him in earnest as he gets up to speed. A marvel of aerodynamics. I’ll stand there until he is only a dot in the distance and then gone from my sight still in flight. I think how far he flew on this one small journey and how much grassy country he requires to exist. It’s fall, nearly election day, and I’ll dream of that sharptail voting his self-interests in the booth. I think I know which ovals he would blacken. I think of gathering up the sharpies into a great caucus so that we might vote together en masse.

If I see a BLM, USFS or game warden truck, I stop and chat with them. Sometimes for an hour or more. I always thank them for the work they are doing and note that I understand they have a tough and largely thankless job. I want them to know I appreciate what they do. I know this place and opportunity did not happen by accident, nor will it continue to exist if we are apathetic.

Somedays you might find me hunting in the CRP. If you were in my head, you’d see memories of my father planting thousands upon thousands of acres of native grass in Kansas during the heyday of CRP. A disciple of Aldo Leopold on a John Deere 4230 and a 12-foot grass drill, trying to restore his corner of the Great Plains. And you’d see the resulting pheasants I chased, seemingly as common as mosquitoes in Alaska. Even a mediocre dog could find a limit in short order. A kid with a Model 42 Winchester could fill a vest in a couple hours. I was that kid. I now count the acres that are being removed from this federal program. I stare at a newly tilled field and remember where a covey once lived. You can hear me gritting my teeth.

I like to stop by a local bar when the bird day is done. I figure those big, national corporatized chains have figured out how to make plenty of profit without me. I want to eat and drink where the locals are. I like authenticity and dirt under fingernails. I want to know how things are going for these folks and what beer they drink.

And if the waitress grew up on a big ranch up north that just happens to have a bunch of birds, all the better. “What’s your dad’s name again?” And, “You think I could call him?” When she hollers her dad’s name in an affirmative tone, I’ll respond, “That’s awesome, I appreciate it. Yeah, I’ll have another beer.”

And then I’ll mutter under my breath with a slight grin, “I sure hope he don’t care that I am a redneck hippie.” As I take my first drink from the beer I’ll wonder if maybe he will vote with the sharptail caucus, too.

Ryan Busse is a former North American board chair of BHA, former board chair of Montana Conservation Voters and longtime outdoor industry veteran. Ryan lives in northwestern Montana with his wife Sara and their two boys Badge and Lander. He and his dogs Teddy and Aldo are looking forward to another season with the sharptail caucus.

Visit BHA's Vote Public Lands and Waters page to sign the pledge and learn more about what you can do to help.