By ROB CHANEY - December 29, 2017 - Originally published in the Missoulian

A land transfer has moved 640 acres of former timberland near Beavertail Hill State Park into public ownership, with more potentially on the way.

The Trust for Public Lands brokered the deal between Stimson Lumber Co. and the U.S. Forest Service for the private parcel checkerboarded inside part of the Lolo National Forest. It provides access to more than 6,000 acres of public land popular for hunting fishing, hiking and biking east of Clinton.

“The Lolo Forest was very interested in consolidating this checkerboard land,” said TPL senior project manager Kristin Kovalik. “It was a priority with them for a while. And we have an agreement to a acquire about 6,000 more acres as funding becomes available.” 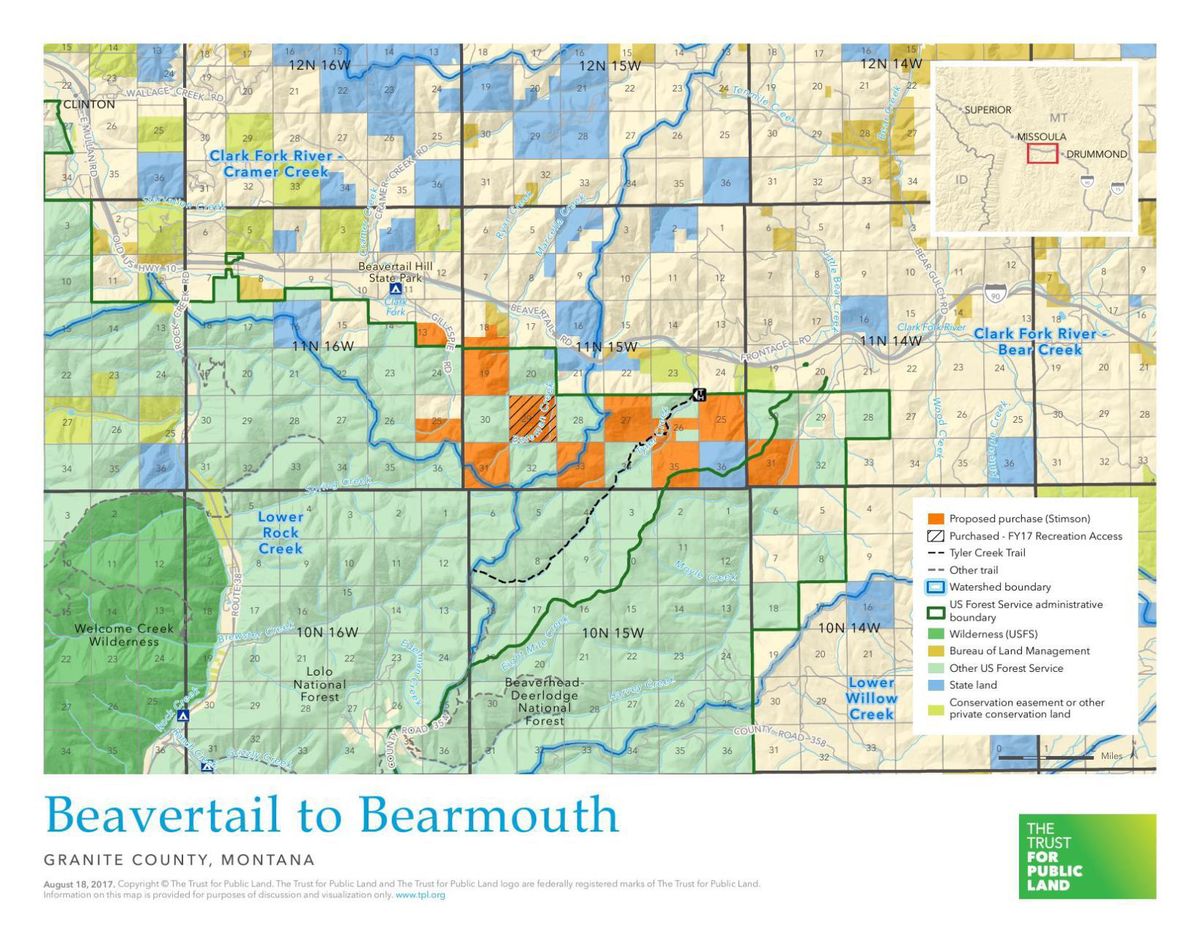 Kovalik did not disclose the full price paid for the Stimson land, but said it included a $500,000 contribution from the federal Land and Water Conservation Fund's Sportsmen Recreation Access Fund. LWCF gets its dollars through a small fraction of revenues generated by federal offshore oil and gas royalty payments and includes no general taxpayer dollars. The Sportsmen’s Recreation Access Fund is available for projects which protect sites of hunting and fishing access.

“Insufficient access is the No. 1 reason cited by sportsmen for forgoing time afield,” Montana Backcountry Hunters and Anglers Chairman John Sullivan noted in an email about the transfer. “Therefore this acquisition could not be more timely or important to hunters and anglers. It also speaks to the importance of the Land and Water Conservation Fund, the nation’s most popular and effective access program. Over the LWCF’s half-century-plus history, the program has enabled conservation and enhanced public access to millions of acres in the United States, including Montana.”

Barry Dexter of Stimson Lumber added, “Stimson Lumber Company recognizes the high recreational benefits to Sportsmen that this transaction offers. Ensuring that this property remains open for public access while maintaining a healthy forest, are important elements of the present and future use of this property. We are pleased to be a part of preserving this legacy for the people of Montana.”

Follow us for public land conservation, hunting and fishing news and resources. We are the voice for our wild public lands, waters and wildlife.