If you’re in the mood for an eclectic mix of fly fishing films complimented by a group of 400+ fly fisherman (mostly men) who hoot and holler for every hook set, line snapped, and fish landed, the Fly Fishing Film Tour is well worth its $16 ticket price. The third annual showing at the Boulder Theater was packed, with the good seats snatched-up five minutes after the doors opened.  And, the “beer for conservation” from Upslope was sold-out before intermission. The crowd was wild and the films were great. 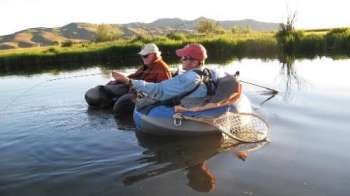 The variation in films provided something for everyone – from a youthful high energy tarpon fishing in Belize, to an emotional feature about a  retired doctor with late-stage Parkinson’s who’s will to live was sustained by days on the river (Doc of the Drakes).

The majority of the films were quite entertaining, but like most film festivals, a couple missed the mark. For example, a film called “Reverb” featured a formerly famous punk band from Chicago whose pastime is fly fishing in Wisconsin’s Driftless Area. Featuring a group of guys that embrace interests of starkly different character was a great idea, but the content was sub-par.

While there were a couple slow points, the vast majority of the films were high quality and entertaining. I was not expecting such a high energy atmosphere from a group of fly fishermen, though I must say I was pleasantly surprised. Do go, but be forewarned; this is not your average evening at the movies.