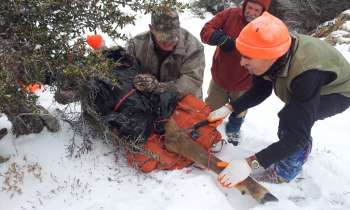 One of the main things required of graduate students, regardless of the field of study, is to read. Exposed to a vast amount of information, you are expected to notice when various thoughts, ideas, and information begin to mesh. Once-held beliefs may be discarded, others reinforced, emerging ideas adopted. Sorted, sifted, and mulled over, somehow it all converges into what you take to be true.

Certain authors may be particularly influential and you learn to pay attention to them. The same thing happens when we read popular hunting and fishing magazines. Prolific contributors become especially recognizable because what they have to say is filled with wisdom.

Some years ago as I was researching then obscure information about riparian (streamside) ecosystems, I came across what was for me an eye-opening paper co-authored by a Forest Service fisheries biologist, Jack Ward Thomas. He went on to become Chief of the U.S. Forest Service. Commenting about the connections between watershed dynamics and riparian habitat, Chief Thomas said something like this: “Not only are these interrelationships more complicated than we think they are, they are more complicated than we can think.” That struck me as one of the most profound statements I’d ever read about how the natural world operates. I tucked that nugget away in my memory bank and never forgot the name of Jack Ward Thomas.

Recently I was going through a stack of magazines given to me by a hunting friend. There were several back issues of a national organization’s magazine devoted to big game conservation, particularly elk. One issue happened to include an article by Jack Ward Thomas, long retired from the Forest Service but still very active in habitat protection efforts. The article was about a particular elk hunting trip in Oregon’s Blue Mountains, one of many he made annually with an older friend and mentor.

In this story, the author used the well-deserved but subtle upbraiding he got from his hunting companion to emphasize that in order for elk to thrive, they need multiple habitat types. In particular, they need connected patches of secure hiding cover-- the harder for hunters to get to, the better for the elk. It seems that for several years running, Jack would shoot a bull elk in a remote, jack-strawed lodgepole pine thicket. This time, the strenuous three-day meat salvage operation almost got the best of the two aging hunters.

How amusingly ironic, I thought, that my elk-hunting, magazine-recycling friend, had just the weekend before enlisted five of us to help pack out the meat from two cow elk that he and his son had shot way-in-the heck back into the Mt. Naomi Wilderness Area in northern Utah. The all-day effort involved close to an eight-mile round trip, with a steep 3000 foot climb and descent on rocky, snow-slickened slopes in sub-zero wind-chilled temperatures. While the physical trauma and minor injuries each of us suffered will eventually heal, I don’t think most of the recovery team is eager to repeat that experience.

In another of the discarded magazines, I read that during his tenure as Forest Service Chief, Jack Ward Thomas was instrumental in working collaboratively to establish the world’s foremost elk research facilities in Oregon’s Starkey Experimental Forest. The ongoing research at the Starkey Project continues to inform public land management decisions and has improved elk hunting opportunities throughout the west. It has also provided a sound basis for much of what Backcountry Hunters & Anglers espouses.

For example, research at the Starkey Project showed that it takes five times as many hikers and horseback riders and twice as many mountain bike riders to push elk the same distance away from travel routes as one ATV!

Most of us know from personal experience that ATV’s can ruin landscapes and spoil our outdoor adventures, yet we may not have been fully aware of the extent to which they disturb wildlife. But with objective data such as that produced by the Starkey research, BHA’s efforts to protect wildlife habitat from motorized intrusion have a much better chance to succeed.

While that study showed how elk respond and move away from various types of disturbances, the upshot is that they need large areas to be able to do so. And although big blocks of rugged habitat are great for the elk, it usually means long, hard days for hunters on foot. As strenuous and at times, painful, as those elk hauling experiences were for all involved, the truth is that without protection for wild country where those elk were encountered, we wouldn’t have earned the privilege to complain.

How much area elk need in order to thrive depends on a combination of many factors. We may not know an exact amount, but we do know that more is better. Having expansive unfragmented landscapes in elk range goes a long way to offset a lot of what we don’t know, or ever will know, about how natural systems interact to create the mosaics of habitat that elk and other wildlife need.

Most of us enjoy reading as much as we can about the animals we hunt and the habitat they require. Besides being a great way to spend our winter evenings, it makes us more informed and credible when it comes to advocating for the wild areas we care about.

Reading can enrich our lives in unexpected ways. Little did I know how my exposure to the early research of a Forest Service biologist would connect us years later through our mutual passions.

Has conservation reading has left a mark on you?  Join BHA today to support hunting and fishing conservation!

About Ken Theis
share on
See other posts related to the campfire Backcountry Stories
Get the latest news and stories, right to your inbox.
Search
Local Chapters