Colorado Hunters and Anglers Pledge to Vote No on Amendment 74

As Coloradans prepare to vote in November, one ballot issue in particular merits our attention as sportsmen and women: Amendment 74. Amendment 74 proposes to amend the Colorado Constitution to "require the state or a local government to compensate a property owner if a law or regulation reduces the fair market value of his or her property."

While this may seem reasonable at first glance, Amendment 74 has implications that are deeply concerning. Laws and regulations currently in effect help protect public resources – our wildlife, water quality and public lands. When a private property owner's activitiesnegatively impact these resources, we've been able to rely on our state and local governments to address them. Amendment 74 makes this an expensive and difficult ordeal moving forward. The rights of private property owners are important and should be respected, but amendment 74 is not the answer. Please pledge to vote NO on Amendment 74. 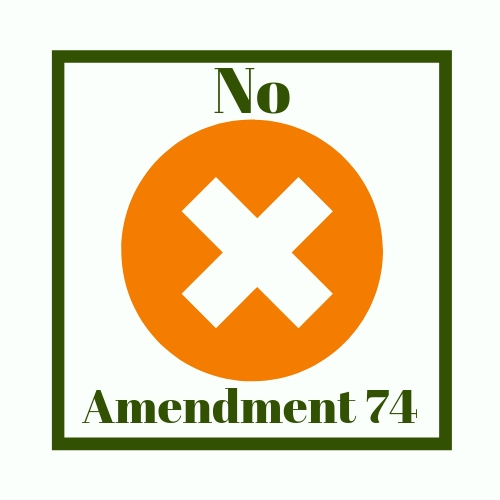 Below is a joint Op-Ed opposing Amendment 74 that BHA along with other sportsmen's groups submitted to the Colorado Springs Gazette.

Fall in Colorado is an amazing time to experience our outdoor traditions. Rifle season is in full swing for deer and elk hunters. Fishing is peaking as autumn mayfly hatches and spawning brown trout draw anglers to Gold Medal streams and lakes throughout the state. It is the time of year that drives our $28 billion outdoor recreation economy as hikers, campers, climbers and mountain bikers spend time outdoors.

There is also something else that happens in the fall with a big impact on our outdoor traditions: elections. On this year’s ballot is Amendment 74, a proposal that could devastate hunting, fishing and wildlife management.

On its face, the Amendment 74 seems reasonable, that the government should pay private property owners for a loss in property values caused by a government action. However, once you dig a little deeper, it becomes clear that Amendment 74 is an extreme, sweeping proposal that would trigger a flood of lawsuits with Colorado taxpayers getting the bill, all while gutting reasonable measures to conserve fish and wildlife habitat.

For instance, in 2007 the General Assembly passed the Colorado Habitat Stewardship Act, which requires the Colorado Oil and Gas Conservation Commission to minimize adverse impacts to wildlife resources affected by oil and gas operations. The new law created rules involving consultation with Colorado Parks and Wildlife and, if warranted, conditions of approval to mitigate impacts to fish and wildlife, such as limiting drilling on critical big game winter range. If Amendment 74 passes, any regulatory limitation on energy development, even in our most vital fish and wildlife habitat, could be interpreted as a loss of production and taxpayers would have to pay compensation for any reduction in fair market value.

Another example are local requirements on construction projects to protect our waterways, such as maintenance of riparian buffer strips and management of stormwater runoff, could provide the basis for a loss of value argument by a property owner that would require the government compensation under Amendment 74 – or abandonment of those important protections.

The language of Amendment 74 is so broad that virtually any arguable impact on private property from measures designed to conserve fish and wildlife – no matter how reasonable or justified or minimal or incidental or temporary – could trigger a claim for taxpayer compensation to the property owner.

The exact reach of its impacts would undoubtedly be decided in the courts, tying up state and local governments in needless litigation, even for frivolous claims. The other impact of Amendment 74 would be a major chilling effect on any local or state government rules designed to protect our environment, public health, and our communities. And as our local governments grind to a halt, so would Colorado’s economy.

These are not just theoretical “what ifs.” Rather, we’ve seen the impact of a similar initiative passed in Oregon in 2004. After three years and $4.5 billion in payouts required from local governments, voters recognized their mistake and repealed the measure. Colorado can learn from their costly mistake and vote “no” the first time.

Amendment 74 is unnecessary, extreme and risky – and it would be enshrined in Colorado’s constitution. It’s intended and unintended consequences would be far reaching, not the least of which include measures designed to protect our fish, wildlife and outdoor traditions.