Off Road Abuse a growing concern in Central/SE Oregon 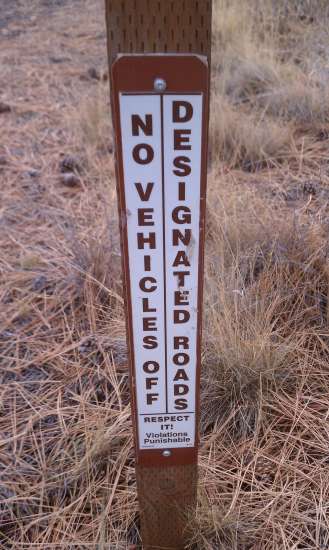 For the past few weeks, I’ve been touring and putting Central and SE Oregon under the microscope as we produce a series of video reports on the adverse impact of illegal OHV use. I didn’t have to look far. These public lands cover millions of acres of sage, juniper, and mixed grasslands. There are sand dunes, massive ancient lake beds now covered with sage, and even some of the oldest human DNA has been discovered in caves near Summer Lake. The geographic area is home to Elk, Mule Deer, Pronghorn Antelope, Big Horn Sheep, Pheasant, Sage Grouse, Rabbits, Brown, Cutthroat, and Rainbow Trout, and some Bass. It is also one of the most remote regions in the United States – hundreds of miles from any major population center. I have lived in Oregon for over 40 years and I re-discovered a part of the state that I thought I knew something about, but at the same time knew very little about.

I also see much to be concerned about as a conservationist, angler, and hunter. In fact, it makes me sick. Below are several pictures I have taken in the region. Most people don’t see this evidence of abuse because they don’t leave the paved roads that penetrate these public lands to enjoy the quiet solitude of hunting, fishing, or just hiking the outback. If more did I’m guessing there would be a major cry for higher ethical standards in the backcountry.

I recently took several pictures of obvious illegal OHV abuse in these regions. In many cases, what I found was disgusting. Tire tracks destroying sage that the Sage Grouse needs for habitat, broken bottles from drunken parties, shotgun shells too numerous to count, camps that were left littered with plastic and other debris that could have been easily carried out. What I saw was a callous disregard for the land we all own. Many years ago, my father told me to leave what we are given as custodians the same as we found it. In his case, he improved it. In the scenes I saw, nobody gave a damn about it.

en our credibility goes to zero and we lose the credibility and the leverage that we might otherwise have to make good things happen.”

I also asked Pat what message he would send to off roaders in general. “I like ATV’s. I’ve used them to both bring out meat and to get to places where I was hunting. I’ve used them for both work and for play. I have nothing against ATV’s or ATV riders. I have a great deal against the people who abuse them and my own experience and my recognition of what other people have experienced indicates that far too high a percentage of those people are abusing their privileges on public land.

These pictures were taken on public lands in Central and SE Oregon. Pictures paint a thousand words and those who created this destruction and others like them need to hear Pat Wray’s wise words. Let’s hope they do. We also have an obligation as conservationists to not just talk the talk, but walk the walk. Pat’s words are a great reminder of this calling.