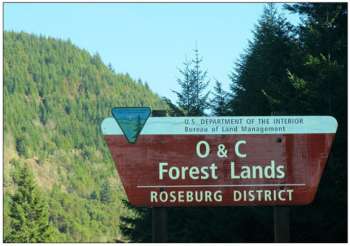 Well, Senator Wyden’s O&C Lands Bill failed to hop a ride onto a Defense spending package that’s steaming through Congress on its way to the President’s desk. Seems it was just too hot an issue to make the trip.

The bill is a nice balance between conservation and timber harvest, but the timber industry doesn’t like it because it doesn’t cut enough board feet to provide the needed revenue, or provide enough protection from lawsuits. The environmental community opposes it because in their opinion it still cuts too much timber and hamstrings their lawyers. Instead of something for each, they both opted for nothing.

So here’s what you get for nothing:  In 2014 there were 94 large destructive wildfires in Washington and Oregon. They burned over a million acres, including old growth and cost almost half a billion dollars to fight. Expect that trend to continue. Much of the remaining public forest can’t support a healthy population of deer and elk because it’s overgrown with nutrient poor vegetation due to decades of fire suppression and a near moratorium on timber harvest.

The environmental groups cite the extensive logging occurring on private forests in the region to justify their opposition to logging O&C lands, a kind of “if they’re doing it over there we can’t do it over here” argument. Not only does that logic ignore the habitat improvement provisions of the bill, it makes no sense. It would be like demanding the release of one prisoner to make up for the abuse of his cellmate. It doesn’t fix the problem or help the surrounding community.

That analogy is just a hypothetical, but in Western Oregon real criminals are being released, because counties can’t afford to jail or prosecute them. According to a May 2013 story in the Oregonian, Grants Pass alone saw reports of assault go up 28%, burglaries climbed 68%, and reports of robberies rose 14% in 2012, because rural counties can’t afford even a modicum of basic services. The O&C bill won’t fix the budget shortfall by itself, but it would be a bigger piece of the budget pie than it is now, and it won’t put everyone in those counties back to work, but it would get some of them working again. It would if the timber folks and environmentalists could resolve their old feuds. But they can’t.

So to the timber folks and the environmental groups I say “congratulations on maintaining the status quo.” You’ve helped an inactive Congress to live up to its reputation by asking it to do nothing, and it did. Pat yourselves on the back, you have the government you deserve. Rent a hall together and throw a party.  Raise a glass to your adversaries across the room. Toast while your precious trees go up in smoke and the Northern Spotted Owl continues its inevitable march toward extinction. Rejoice in the misfortunes of the public land hunter, who’s seeing dwindling tag numbers and lost opportunities in a landscape that’s losing its diversity. You know him. He’s the orange clad fellow who spends over $240 million per year helping to bolster those struggling rural counties, and cares deeply about the health of his wild public lands. But be happy, his loss will be your lawyers’ gain once the next round of lawsuits gets trundled out onto the battlefield.

Celebrate because the average Oregonian doesn’t see what’s at stake here, that the key provision in Senator Wyden’s O&C Lands Bill, the one that keeps federal public lands under federal control is in danger of being stripped away if a future compromise bill is introduced. The easiest way for private timber companies to gain ownership of federal public land is to have it transferred to state control, but hush. That’s for a future celebration.

Fortunately the bill isn’t dead yet and is supported by a broad group of legislators, educators, rural businesses, timber folks, and real conservationists practicing real conservation. These folks don’t buy into the notion that the timber issue is still governed by two opposing sides with outdated ideologies. They work to compromise because they understand that healthy forests, clean water, abundant wildlife, and economically viable communities can’t be sustained by clinging to the status quo.

About Caitlin Thompson
share on
See other posts related to oregon bha Oregon Issues
Get the latest news and stories, right to your inbox.
Search
Local Chapters