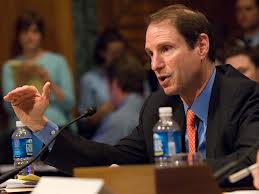 On July 1, I attended Oregon Senator Ron Wyden’s town hall meeting in Albany concerning the future of O & C lands and met with him privately afterwards to discuss our needs as backcountry hunters and anglers. Your action alert emails to the Senator’s office will help insure that our public lands remain in public hands – thus protecting our access and rights to backcountry hunting and fishing. The O & C lands are federally – owned timber lands in 18 Oregon counties.

Oregon counties are strapped financially and local and state officials are putting pressure on Wyden and the entire Oregon Congressional delegation to increase logging so counties reap more revenue. Wyden is squarely in their court. At Albany’s meeting, he told the crowd that passage of this bill is his “highest priority” and that the whole Oregon delegation is “committed to getting our timber harvests up and protecting our Oregon treasures.” I asked him later if hunters and anglers will have equal, more, or less access should this legislation pass to open up more timber harvest. His response was “in these kinds of natural resources questions, people don’t get what they want, they don’t get what they believe they deserve, but I think they can get what they need.” What BHA members want is to conserve wild habitat that make Oregon a great place to hunt and fish. See the Wyden video here:

This legislation will be hammered out in various committees this summer and the Senator is hopeful it will pass later this summer. At present, various interests are meeting with the Senator’s staff hoping to influence the final outcome. Now is the time for BHA members to speak up and be heard. Each year, 1.8 million people hunt or fish in Oregon.   Senator Wyden acknowledges that recreation is big business. The Outdoor Industry Association says that active outdoor recreation generates nearly $13 billion dollars annually in consumer spending in Oregon and supports nearly 150,000 jobs.

One proposal would shift approximately 1.5 million acres of the O&C forests to a trust to be managed by the State. At Backcountry Hunters & Anglers, we are adamantly opposed to any giving away of Oregon’s public lands and water. Wyden appears to be cool on this issue, but some members of the State’s Congressional delegation are supporting it.

Wyden does say he is open to modernizing federal regulations to allow steady logging. While he is not saying what volume of logging he would support, others suggest an increase of approximately 300 million board feet over the current 200 million board feet being harvested annually. That’s a significant increase that would potentially have negative impacts on game, salmon and trout streams, and general wild habitat. BHA believes logging on national forests should be balanced with the needs of wildlife.

I encourage you to weigh in on this important matter. You can email your concerns directly to Wyden’s top aide in Oregon, Mary Gautreaux  [email protected]. Please state that “public lands should remain in public hands” and that we shouldn’t give away our pristine wild land and water habitat. Thank you for your help!