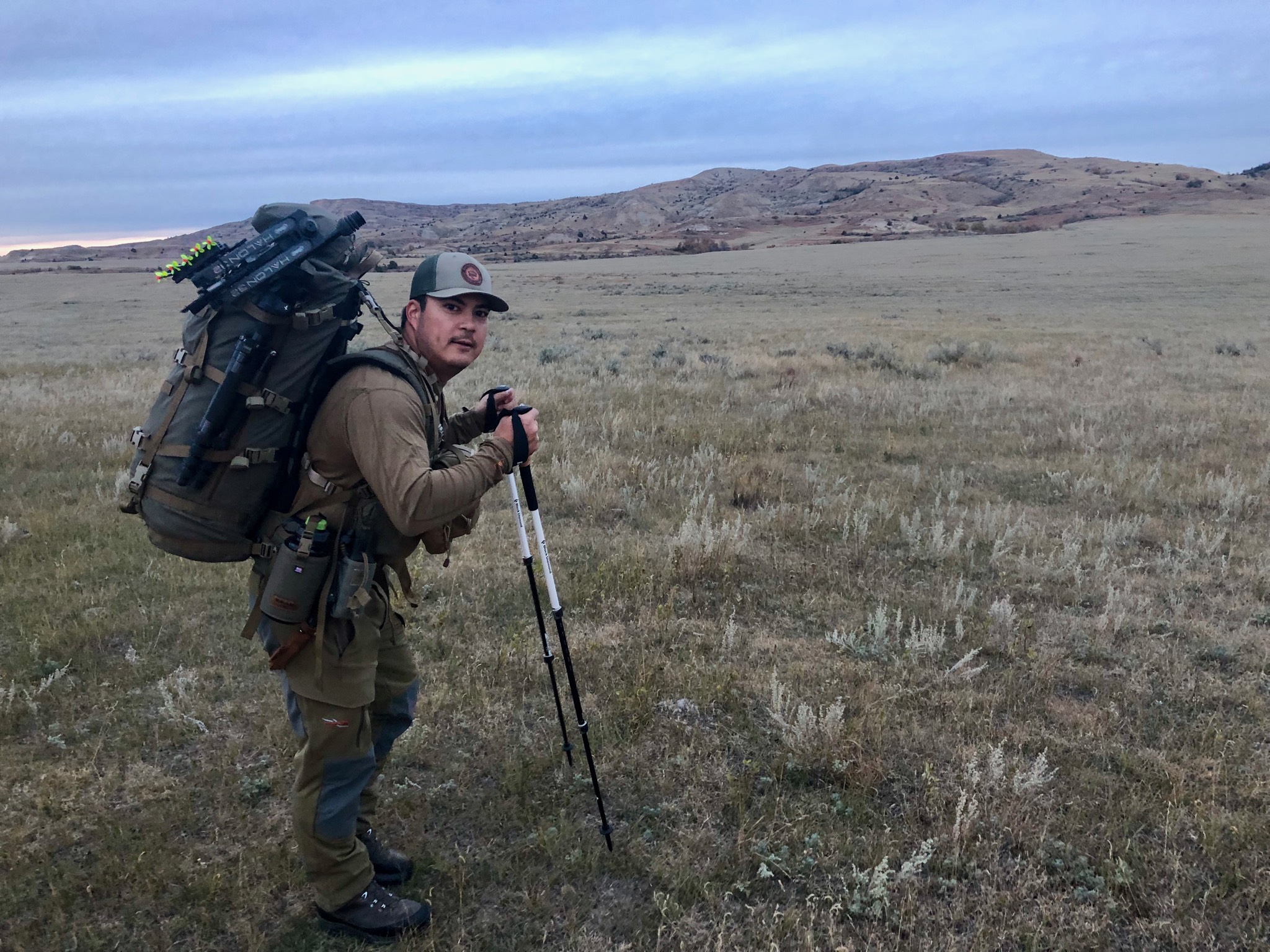 A North Dakota native, Brock currently lives in Bismarck with his wife and two kids and works in natural resources.  Growing up in a family full of avid waterfowlers, he wasn’t really introduced to the idea of public land and public access until he harvested his first two deer on public land as a teenager.  “We’ve always been a hunting family, but it wasn’t until I started hunting out west and spending time on National Forest Service land that I took some ownership in our Public Land.”  Now spending most of his free time with a bow in hand chasing Mule Deer, the North Dakota Badlands have become his home away from home and they formed a foundation for his idea of conservation and wild places. “North Dakota does not lay claim to any dramatic mountain ranges and our landscape can be a little dull by comparison, but I will always consider the Little Missouri National Grasslands to be the place that inspired me to get involved in conservation, they played a huge role in defining what conservation meant to me.  The Badlands led me to BHA.” In terms of his work with BHA, he would consider himself an energetic and passionate advocate for public wild lands, and takes pride in being intimately familiar with issues.  Brock has written numerous articles about the Badlands in local publications and the Backcountry Journal.

James grew up in Minot North Dakota, where he enjoyed hiking, walleye fishing, and pheasant hunting. While attending college in Wyoming he developed a passion for the mountains. When he wasn’t 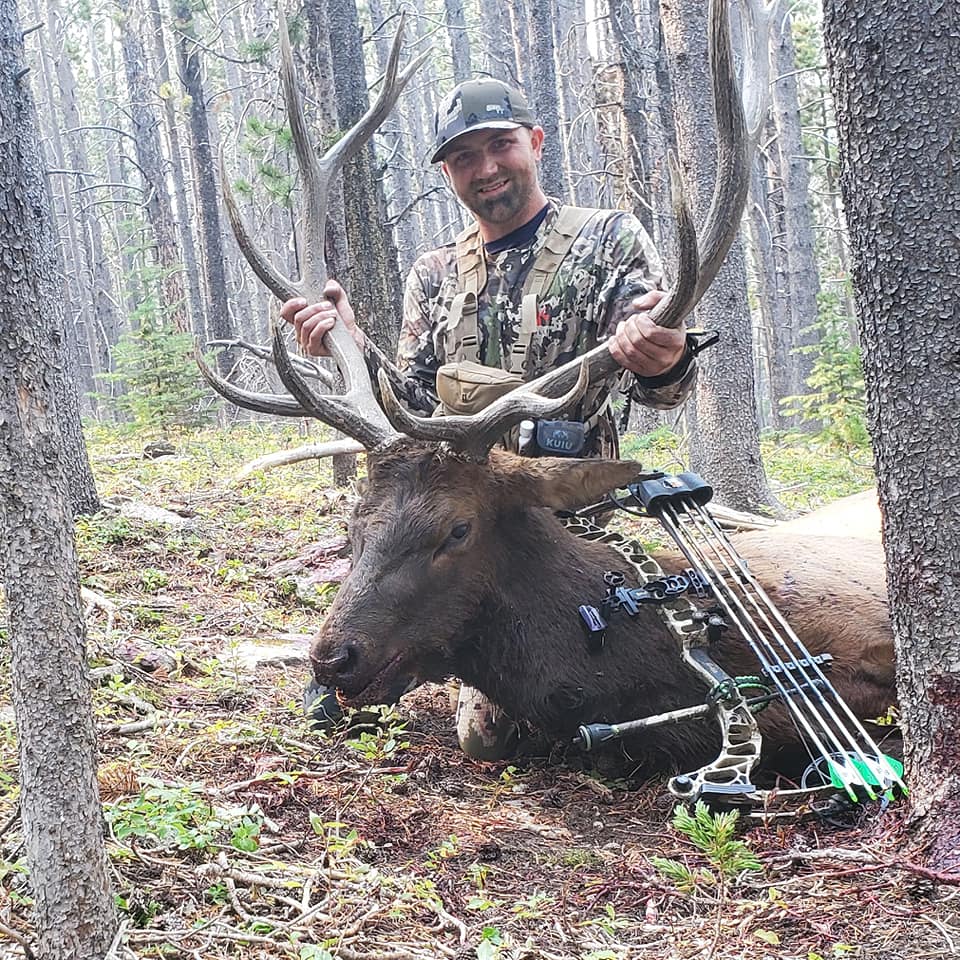 working on a ranch or in school, he spent all his free time camping, backpacking, rafting, snowboarding, and hunting. Later he moved to Grand Forks where he spent much of his free time fishing the Red River and lakes all over Minnesota. He didn’t get into big game hunting until his late 20’s when a good friend gave him a bow to use and learn with. With that generous gift, an addiction was formed hunting white tail and turkeys in Eastern North Dakota and Minnesota. However, the outdoor desires where just not being met. He decided to plan a trip back to the landscape he loved in the badlands and solo backpacked the Maah Daah Hey Trail. After completing the trail in 3 days he decided a change in his life must be made. He picked up and moved to Watford City that year. Now with the larger amount of public land in his back yard fills his whole life with the great outdoors. From shed hunting and wildlife photography to chasing mule deer and bugling bulls with his bow, “There are endless opportunities when we have access to public land”

He found BHA through a take action post and has since followed along with all legislation attempting to remove or develop on public lands that he holds so sacred. Within North Dakota he found many areas that he would like to improve on or restrict access to and was not finding the help he desired from other organizations. So, he sought out BHA to get more involved and is looking forward to protecting and improving our public lands for generations to come. “Invest in land, they aren’t making anymore of it!”

“One gift, one act of generosity, one word may change someone’s life.”

Andrew lives in Bismarck, North Dakota, where he works as a project engineer for a mid-sized manufacturing company. He grew up on the eastern edge of North Dakota. Being so close to the Land of 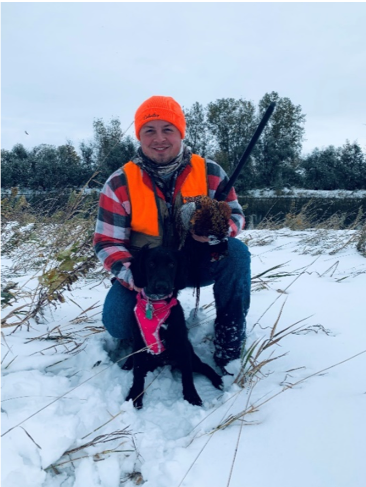 10,000 Lakes (MN), Andrew spent his early years on the water. As he spent more time in the outdoors, he was introduced to the pursuit of wild game. The fast-shooting aspect of hunting ducks, the patience of hunting deer, and the hard work of hunting pheasants sealed the deal for a lifestyle of hunting and fishing.

Now, Andrew spends much of his time in the field chasing ringnecks with his Fiancée and his dog, Raine, on the thousands of acres of public land in North Dakota. Coming from very few connections to private landowners, “my only opportunity to harvest wild game came from public lands, so I know firsthand how important it is to retain and expand the public land portfolio. Without public lands, very few people would ever get to experience the outdoors, myself included.”

When hunting seasons wrap up at the end of the year, Andrew spends his time outdoors skiing and pulling fish through the ice. As the ice retreats in the spring, he enjoys fishing the open water, camping, hiking, and taking photographs of wild critters and the landscape everywhere he goes.

“Public land has provided me an opportunity to get outside and enjoy what nature has to offer, whether that be hunting, fishing, hiking, or photography. The uses of public land for any individual are limitless, and that’s what makes them so important.” 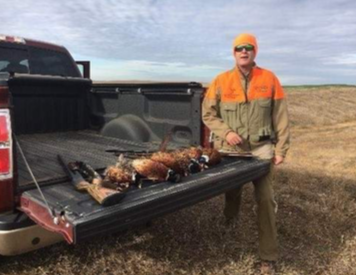 Darren grew up on a ranch in Eastern Montana. When he wasn't working, Darren spent a lot of time hunting and trapping. While going to MSU in Bozeman, he was able to hunt elk and fly fish for trout in some of the best trout streams in the world. Since moving to North Dakota with his wife and three boys in the mid 90’s, he became an avid upland bird hunter. Darren became a bow hunter while in North Dakota, hunting deer on the public lands in western North Dakota. As he has gotten older, he has come to appreciate the public lands and the opportunities they afford every American. North Dakota is also where Teddy Roosevelt's roots in conservation started.

"We need to maintain conservation efforts, not only for us, but especially for future generations. BHA is a great organization to do just that." 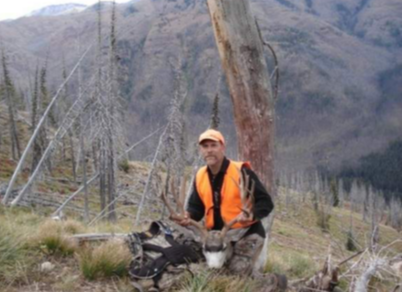 Dave grew up in the agricultural landscape of Iowa and learned at a young age the implications of limited access to limited resources for those who yearn to spend their free time in the great outdoors. After graduating from Iowa State University, Dave moved to an outdoorsman’s paradise called North Dakota to begin his career as a wildlife biologist for 27 years. Unfortunately, Dave watched the same history of commercialization and loss of access that he witnessed in Iowa unfold in his new home. This is the same plague that has decimated hunting in many states for those with modest means.

"In order for future generations to enjoy any semblance of what we have been so blessed to enjoy, it is imperative that we defend those special places remaining, which belong to all Americans, from those who only think with their pocketbooks or care only about the bottom line."

John was born and raised in northeastern North Dakota. Growing up, he spent summers fishing the area’s small reservoirs or the big water of Devils Lake. In the fall, he chased waterfowl with friends and 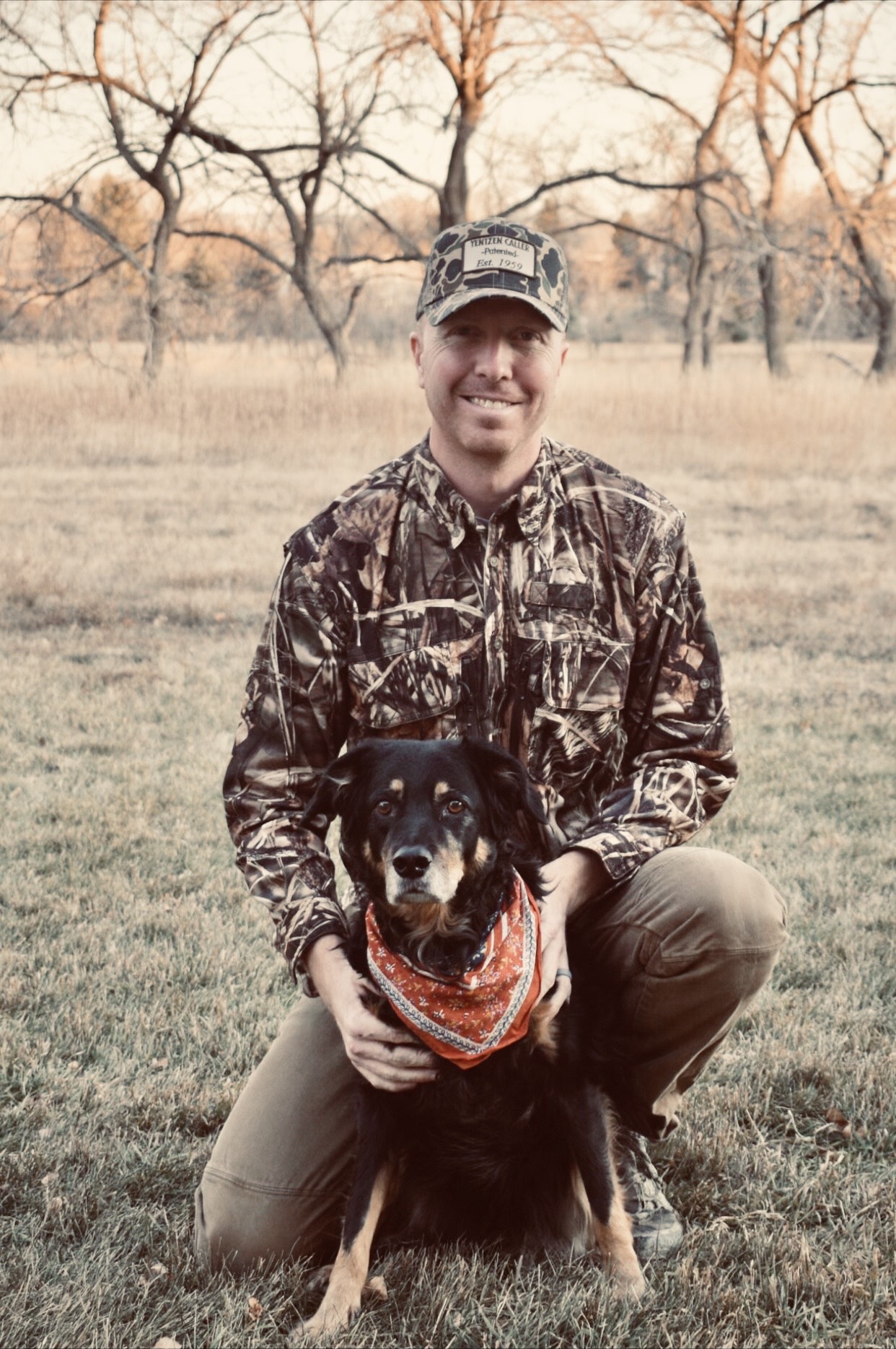 family until it was time to focus on whitetails. After attending college in Fargo, John graduated from Bismarck State College and is currently working on an Operations Management Bachelors from Arizona State University. He is currently employed by a local electric cooperative and also serves as a staff sergeant in the North Dakota Army National Guard, with one tour overseas. After moving to Mandan for his career, he began to rely more on public land for his hunting and fishing pursuits. In addition to hunting and fishing, John and his wife spend time each year exploring the west’s national parks and national forests. “I believe the two main factors to a quality outing are habitat and access. Compared to other states our size, North Dakota has relatively few public acres, and these lands that belong to everybody need to be protected. That’s what led me to join BHA”. 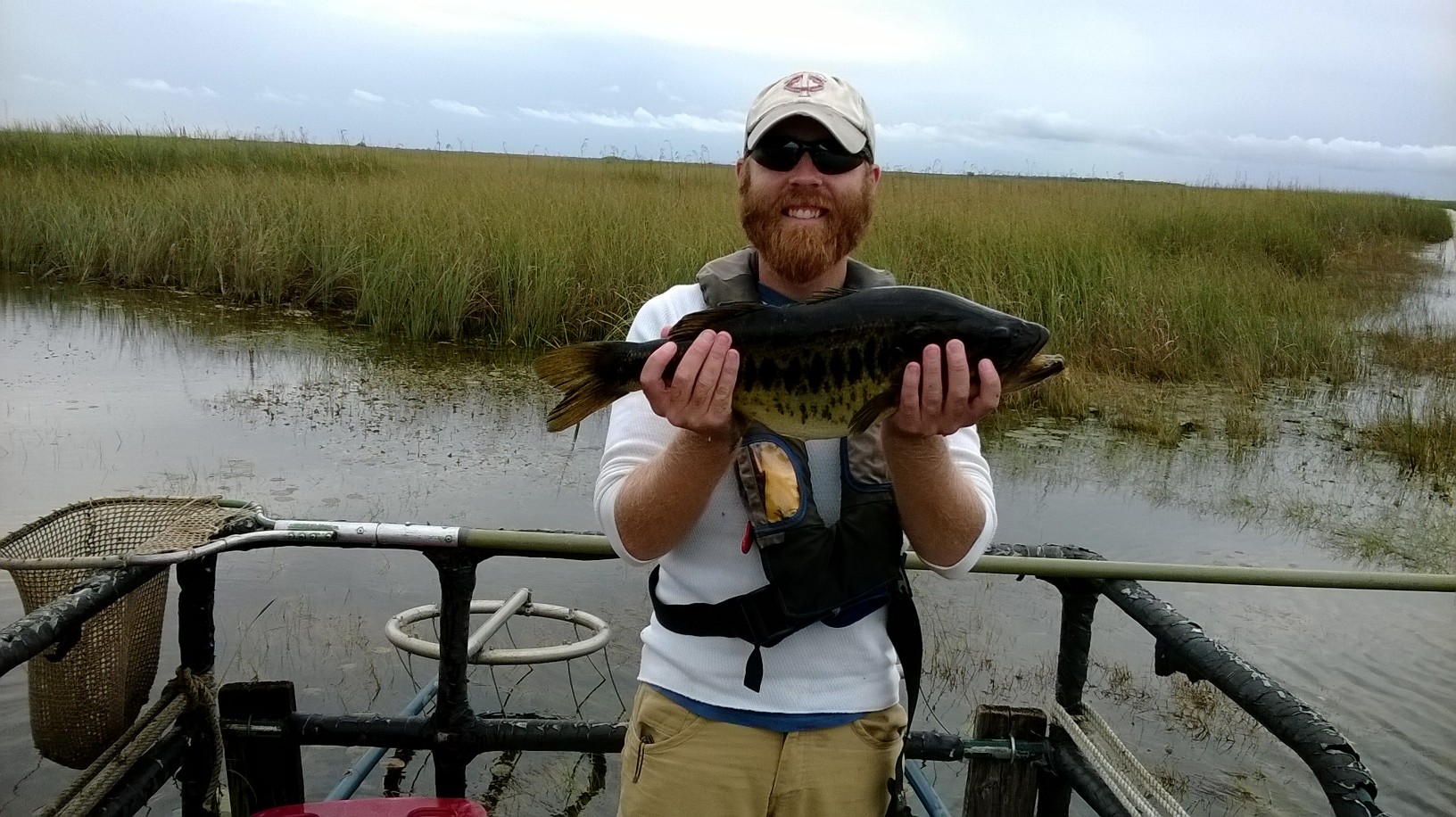 from the U of MN. After school, Mike began working on his dissertation in South Florida, working on fish ecology projects and Everglades restoration. Of particular interest were how Florida Bass and Dogfish (a very underrated game fish) were responding to the massive landscape changes that were happening because of landscape restoration projects. Mike spent a lot of time airboating across some the largest public wetlands in the Lower 48, interacting with fishermen all over who take great value in fishing this massive wilderness just a short drive from the Miami/Ft Lauderdale metro area. Mike now lives in Fargo with his wife and little boy, dedicated to the idea that if the people of South Florida can have such easy access to wildlife-rich public lands, the people of North Dakota should have the same.

Besides fishing, Mike likes targeting waterfowl in the many Waterfowl Production Areas of eastern North Dakota, exploring different ways of cooking game, and birding with his family in the Sheyenne National Grassland and Urban Woods & Prairies nature parks in Fargo-Moorhead.