Over a year ago MT BHA recognized that rapidly revolving and availability of unmanned aerial vehicle (drones) technology threatened fair chase hunting.  GPS and real time cameras, including infrared cameras can easily be attached.  Drones are more common and cheaper than ever.  They can be easily flown at night to scout for hunting the next day.  They can be used to move wildlife to aid hunting.  We have seen too often that delaying regulating technology leads to no action by agencies, and traditional hunting is further eroded. We had little time to spare as the following videos demonstrate the drone technology was soon-to-be flying over the horizon.

So Montana BHA worked for the last year with FWP law enforcement on wording specific to UAVs or drones that was ironclad and clear.

"The use of unmanned aerial vehicles (UAV) for the purpose of locating, spotting or hunting big game, upland birds or other species under the management authority of FWP during commission-established hunting seasons is prohibited."

As a result of Montana BHA work and persistance,  drones are now outlawed for scouting or hunting, period.  They cannot be used the previous day as other aircraft are allowed.  This "loophole" allows normal aircraft to fly the evening to locate animals and then be at the location early the next morning.  We wanted that loophole not to be available with drones.

The public supported this proposal and opposition was minimal.  Drone regulations were adopted by the FWP Commission on Feb 13 and will be in place for the 2014 hunting season.  Thank your Fish and Game Commissioners for their positive action on  technology threatening fair chase.(Phone 444-7826 or email  [email protected]. 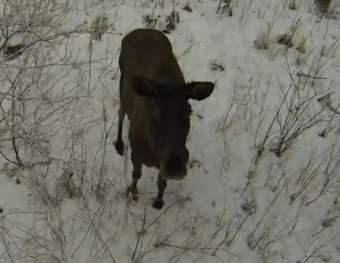