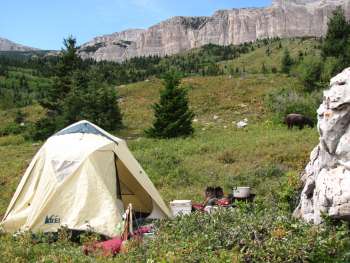 The following is Montana BHA's response to a recent survey conducted by the Environmental Quality Council in regards to the management of federal lands in the state.

As a statewide hunting and angling organization, Montana Backcountry Hunters and Anglers (MT BHA) consists of over 300 engaged Montana men and women. The following is our response to SJ 15 and the recent survey of counties re SJ15 by EQC.

Resident hunters and anglers in Montana are increasingly dependent on public lands to hunt and fish, as most private lands have become much more difficult to access.   In fact, approximately 68 percent of resident hunters hunt on public land.  This is important to note as only 29% of the state is held in federal ownership.  To attempt to accommodate hunters and anglers on less than a third of the state will require very careful management of habitat for both wildlife and fish.  Hence to retain huntable and fishable populations, protecting and enhancing habitat to support these species should be the core element considered for the management of public land.

Speak-up for your public lands, sign the Sportsman's Pledge here

The undertone of SJ 15 suggests that the Montana Legislature thinks its management skills and abilities are better than the current federal land management professionals.     While all of us would like to see changes in public land management, at MT BHA we also believe that science based decisions should be at the core of any successful long term management policies.   We also believe that the various ideas for managing public lands are easy to talk about, but implementation takes money that Congress, and we fear the Legislature of Montana, would be unable or unwilling to allocate.

We also believe that well cared for federal public lands, will allow Montana to attract and retain businesses because of the relatively abundant outdoor opportunities and our wildlife, fish, scenery, clean air and clean water.  Without well cared for public lands, Montana will not be competitive with other states for new businesses, given our distance from markets, expensive air travel, and continental climate, i.e. cold winters.  Seventy percent of businesses recently surveyed stayed or located here due to outdoor opportunities.  To try to depend upon expanded industrial forestry, mining, and oil and gas developments will only take us backwards economically in the long run, not forward.

“During the summer of 2013, the SJ-15 Working Group developed and mailed a series of questions to ask of all the Boards of Commissioners representing Montana Counties that where 15% of the county’s land  is managed by the U.S. Forest Service (USFS), the Bureau of Land Management (BLM) or a combination  of the two. “

“Twenty-eight of the 35 counties surveyed responded, although every county did not answer every question. The survey questions along with the number and percentage of county commission responses directly pertaining to each question are noted in the following summary.”

MT BHA Response:   Unquestionably, the survey questions sent to counties were collectively designed to be leading questions to obtain a skewed response from county officials to portray federal land management in a negative light.

Page 7, SECTION 1 - PUBLIC HEALTH, SAFETY, AND WELFARE: More than 20 counties said wildfire conditions on federal lands pose a significant threat and the hazard should be reduced to protect public health and safety.

MT BHA Response:  Due to 100 years of fire suppression, the present condition of most of Montana forests have resulted in the unintended accumulation of high loads of forest fuels.  While we support sensible and careful forestry on some previously roaded public lands, we believe eventually nearly all forests will burn.  These burns under extreme conditions will burn forests in all age classes and regardless of previous land management actions.  In addition, today’s forestry practices need to be designed and executed to meet the needs of all resources, not just the single objective of fuel reduction.  To reduce risk of fire to existing residential structures, research has shown vegetation management funding and efforts are best spent on reduction of fuels in the immediate vicinity of residential structures. New structures should be discouraged in the wildland and wildland urban interface and should include the adoption of requirements to use fire resistant building materials and mandatory vegetation management.    Taxpayers are currently subsidizing fire protection for private structures in the wildland urban interface.

Page 13, Pie Chart: IS THERE AN ADEQUATE SUPPLY OF MOTORIZED ROADS ON FEDERAL LAND?: Most respondents responded that motorized access to public lands is very important and the amount of motorized access should be increased or at least maintained.

MT BHA Response:    According to Forest Service reports, there is currently an eight billion dollar backlog in Forest Service road maintenance needs.  To suggest that motorized access should be increased ignores the current dilemma of too many roads for the maintenance funding Congress is willing to allocate.   This road maintenance backlog results in more sediment to streams and creates unsafe driving conditions.   In addition, the current motorized trail network is not being maintained sufficiently, also resulting in sediment to streams, noxious weed spread, and unsafe conditions.   The Legislature would also likely have difficulty in finding State funding to properly maintain these roads and trails.  To suggest that more roads and trail access be increased or even maintained is not viable when additional funding is not available.  In addition, more motorized routes would further fragment wildlife habitat, add sediment to streams, and conflict with non-motorized activities.

In addition, the State of Montana has few federal lands of substantial size without existing roads.  Outside of Wilderness and National Parks only 6.8% of Montana is in a Roadless condition.  Only 2% of the lower 48 states is roadless, and therefore these Roadless lands are also valued by non-Montanans as well as us here in Montana.  Most Roadless lands are too steep and rugged to economically road, and they offer some of the best remaining hunting, wildlife habitat and non-motorized recreation.  It should be noted that even some of the “roadless lands” already contains some roads and motorized access.

Page 8, Question 11. Is the Payment in Lieu of Taxes (PILT revenues) your county derives from federally managed lands equivalent to the amount that actual land taxation of these lands would bring? : Most respondents said federal funds intended to offset the impacts of federal lands are not equivalent to amount of revenue earned if the lands were privately taxed or funds generated by responsible harvest and resource extraction.

MT BHA Response:   The wording of this finding suggests that perhaps EQC believes federal lands should be privatized to raise tax revenue. We note the previous drafts by EQC on SJ15 did indeed encourage transfer of federal lands to the State of Montana.  We believe that 78% of Montanan’s would object to eventual privatization as the vast majority of Montanan’s support retention of Montana’s public lands.

“Responsible harvest” is an ambiguous term.  Does this mean federal clean water, air and threatened and endangered species laws should be circumvented?   How about protections for elk security, adequate stream crossings to provide fish passage, or landscape considerations to retain scenic value?   We believe lands managed only for forestry production or to maximize net economic return generally compromises these values.   And it cannot be ignored that the timber harvest in the 1960-2000 period was unsustainably high and liquidated the best and most easily accessible forests, leaving steep lands and small timber for future timber management.  This reality makes it difficult for future Montana forest management to economically compete against better timber growing sites on the West Coast or South.

“Resource Extraction” suggests mining.  Montana certainly has a long history of mining, for which the public has time and time again picked up the long term costs of environmental remediation.   Butte-Anaconda and Zortman-Landusky are quick examples.   As a result and despite long term remedial efforts, those mined drainages lands only marginally support huntable wildlife and fishable fish.

Ranchers across Montana currently benefit from the extremely low grazing rates on federal lands which are about 15% of what the State of Montana charges and far less than private land grazing,  Does the EQC propose that to generate more revenue for counties, that grazing fees be raised to current State or private land levels?  We suggest an open dialogue with the federal public land grazing permittees before pursuing this issue.

MT BHA Response: Federal lands belong to all Americans, not just the residents of the counties in which they reside.    Given there are many federal policies, requirements and laws, it should not be a surprise that there is some inconsistency with local plans.    To our knowledge, all projects and plans of any Forest or BLM lands are required by NEPA to offer opportunity for public comment, including those of representatives of the Counties.    Our experience is that federal agencies document all these comments and offer responses.

Page 14, Pie Chart, What is the Influence of Special Interests on Federal Land Management?: Twenty‐three respondents said special interests have significant influence on the ability of federal agencies to develop and implement effective land and resource plans.

MT BHA Response:   Federal laws, policies and regulations guide federal land management plans and activities.   All Americans can participate in the formulation of this guidance.   Certainly some special interests are more successful in influencing federal agencies more than others, as is also the case of State government.

For example, during the 1970-2000 period, the timber industry was THE special interest had perhaps the greatest influence on Montana’s national forest lands.  This influence resulted in unsustainable and rapid liquidation of the best timber in Montana.  Improvements in industrial efficiency gradually meant more wood harvested with less people, and sawmills that could be operated with fewer workers.   That trend of fewer jobs per volume of timber continues today. Much of this timber did not generate value-added products.   In contrast, log home construction, mostly using bug or fire killed timber, created many more jobs per timber volume than high speed mills.  It is doubtful that, given current relatively high logging costs and relatively poor remaining timber, that Montana timber industry could be significantly revitalized.   A reduced timber program focusing on value-added products would generate more jobs for local communities.

You can trust Montana hunters and anglers will remain deeply involved in the future management of Montana’s federal lands.   These lands will continue to be what makes Montana different than other states and attractive for businesses to locate and grow here in Montana.   Montana’s hunting and fishing on public lands is of vital importance both culturally and economically to our state.   There are hundreds of thousands of Montanans who participate in outdoor activities, including hunting and fishing.  Montana’s $5.8 billion outdoor economy generates 64,000 jobs.    We are watching carefully how the Legislature proceeds regarding management of federal lands.