The following Op-Ed by Brian Jennings was orginally published in the Bend Bulletin on February 2, 2014. 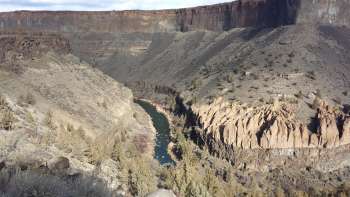 Since 2008, the Trust for Public Land has been quietly working to transfer a privately held 101-acre parcel of land along the Crooked River Canyon to the Bureau of Land Management. The transfer, using money from the Land & Water Conservation Fund, would provide a seamless access point for outdoor enthusiasts, thus allowing greater public access to this Central Oregon treasure. For anglers, hunters, hikers and all outdoor enthusiasts, this is a big win if approved.

The cost of the land transfer to the BLM would be approximately $1 million. But, it’s important to know that using LWCF funds does not use taxpayer money. LWCF is funded by offshore oil and mineral exploration fees. Now in its 50th year, LWCF was set up to protect public lands throughout America. In Oregon alone, the fund has fueled more than $300 million in public lands investment. The funds have been used to help protect an impressive list of public lands in Oregon, including projects on the upper John Day River, the Blue Mountains, the Cascade-Siskiyou National Monument, the Rogue River and others. Now, the Crooked River Canyon project has become the BLM’s top priority in Oregon to fund this private land transfer to the public domain. There are other benefits making this transfer worthy of approval.

Public lands, if managed well, are a perpetual economic resource fueling a growing outdoor recreational economy that benefits almost every town and city in the state. On a national scale, outdoor recreation is a $646 billion dollar business. In Oregon, the Outdoor Industry Association reports that outdoor recreation generates $12.8 billion in consumer spending and contributes $955 million in state and local taxes. Outdoor recreation also supports more than 141,000 jobs in the state, and these economic benefits typically help our rural communities — where most of these valuable recreation lands are located.

Central Oregon is dependent on outdoor recreation and continues to be a growing magnet for outdoor enthusiasts. We have the largest concentration of destination resorts in the Pacific Northwest. Longwoods International tracks American traveler trends and estimates $430 million dollars is spent each year on overnight stays in Central Oregon. This has a significant ripple impact on our economy and it’s estimated that $45 million of these dollars are directly spent on outdoor recreation.

The land transition also has the support of other organizations, such as Trout Unlimited, the Association of Northwest Steelheaders, The Heart of Oregon Corps, which engages young people by mentoring them with jobs and other stewardship, Deep Canyon Outfitters and others. Trout Unlimited was brought on board to improve a trail leading to the river while protecting the habitat. Salmon and steelhead runs are being reintroduced and anglers want to make sure that access to the river is not only available to the public, but protected now and for future generations.

Despite clear economic benefits, the Land & Water Conservation Fund has been under recent heavy attack by members of Congress who want to eliminate its funding and use the money for other purposes. Backcountry Hunters & Anglers think that is shortsighted and we encourage full and permanent funding of LWCF. To that end, we continue to support Senate Bill 338 introduced a year ago by Sen. Ron Wyden, D-Ore., which, if passed, would guarantee full, permanent funding.

The Crooked River Canyon land transfer to the BLM is a project whose time has come. It protects a treasured part of Central Oregon’s public lands along a wild and scenic section of the river and helps fuel an economy that is growing and providing needed jobs for Central Oregonians and recreational opportunities on public lands for all. (A video report on the Crooked River Canyon project can be viewed at www.youtube.com/watch?v=oU-xvZfER3w.)

— Brian Jennings lives in Bend and is the sportsmen’s outreach coordinator for Oregon Backcountry Hunters & Anglers.