The Tenets of Offal: Fried Venison Liver and Onions 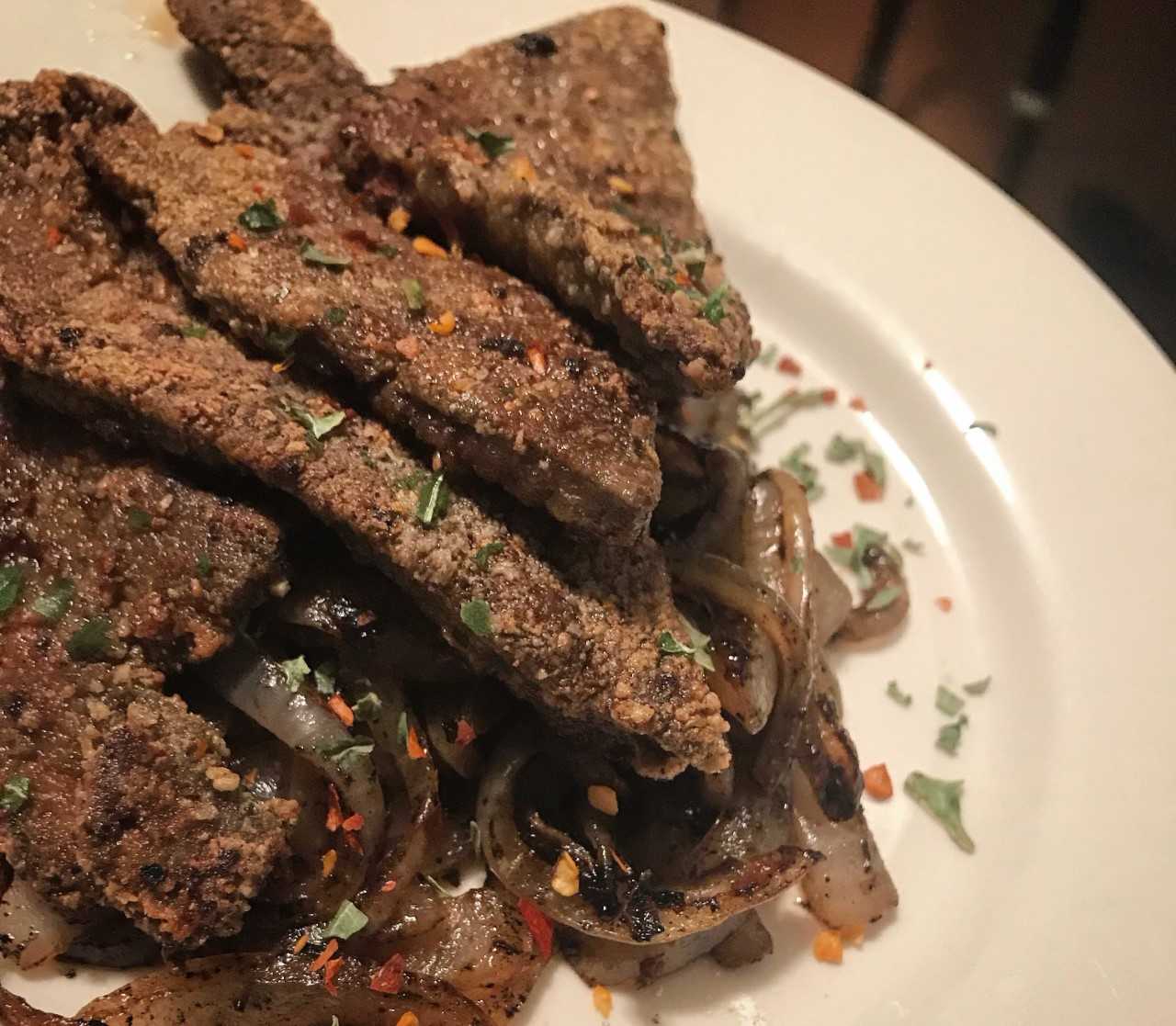 In the three years that I've been hunting, I've been introduced to new tastes that I wasn't sure I'd like, but ended up loving.

I tried a friend's deer liver a few years ago and found it to be pungent and, honestly, pretty terrible. I could barely stomach it. I promised myself that I'd have one more go at it, and this year's deer proved to be the opportunity to take it.

I was committed to making it my first meal. It took three days to work up the gumption. I started by putting it in a herbed brine for 24 hours, hoping that it might cut the edge a bit. Staring at the large and alien organ in front of me, I decided to take the safe road and stick to frying. I'd recently watched a cooking show in which they had fried chicken that was breaded only in seasoned corn starch, no flour. And lucky me--I had a ton of corn starch on hand.

The great thing about corn starch is that it's more of a binder than flour. It creates an insanely crispy, crunchy, and classic fried crust. In my time working with some great wild game chefs, I've also learned that the key to liver is slicing it thin. I sharpened my knives and got to work.

The outcome of this recipe is something you could set down in front of nearly anyone and convince them to take a bite. The fried outcome is familiar where the liver is not, and seasoning the corn starch is the key to creating a flavor profile against the deep savory nature of the liver. I used Jalapeño Salt from my friend Chef Ed Garcia's Montana Mex line, which you should most definitely get asap, but you could also exempt it or add spices of your own choosing to the mix. The measurements aren't perfect, I simply added different spices until I liked the way the corn starch tasted. I also used coconut oil, as it's what I had on hand. You can use whatever oil you like for frying.

Really, I'd recommend just standing by your stove and eating the slices as they come out: crisp, hot, and decadent. It was enough to make me a believer in the tenets of offal, and I'm looking forward to the next time I can cook up one of my new favorite meals.

1. Mix your corn starch and spices, and place in a bowl.

2. Crack eggs into a bowl and whisk together with a splash of water.

3. Caramelize onion until brown and sweet in separate pan, with a bit of salt and a pinch of brown sugar. Keep warm.

3. Warm oil in pan until it sizzles when you drop a little water in it, or if you'd like, to 350 degrees.

4. Take sliced liver and dip it into egg wash, then dredge in corn starch mixture until it's entirely covered. Drop slices into pan, do not crowd the pan.

5. As soon as the starch mixture is brown and crispy, pull it out and place onto paper towels to drain and cool for a moment. Be careful to not overcook, 1-2 minutes max should suffice.

6. Place fried liver on onions and enjoy while it's fresh out of the pan.