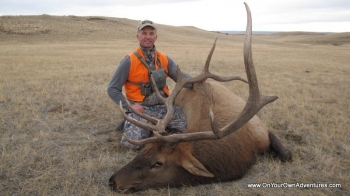 You may know him from his hit TV show "On Your Own Adventures", or from the popular hunting forum "Hunt Talk", or as a founding board member of Orion, The Hunters Institute. Regardless of how you know Randy Newberg, it’s impossible to miss his energetic defense of the principles upon which our hunting heritage depends – public ownership and access to wildlife, wild backcountry habitat, fair chase hunting and a do-it-yourself spirit. Randy serves a much-needed voice for the average public land hunter in a media industry otherwise dominated by hunting footage that threatens the hunter’s namesake, rather than propping it up. Recently named “2013 Sportsman of the Year” by the Sportsman Channel, it’s clear that the popularity of Randy’s message has not gone unnoticed.

BHA owes a debt of gratitude to Randy for helping to carry the value of public roadless backcountry habitat and hunting opportunities to sportsmen everywhere. We are grateful for his generosity to the organization and are honored to host him at the International Sportsmen’s Expo in Salt Lake City (3/14-17).  If you plan on being at the show, be sure to join BHA and Randy Newberg for a social at 7:00 PM, Saturday, March 16 at The Studios at Jordan Commons, 9400 S State St. Sandy, UT 84070. There will be free refreshments and a free showing of previously unreleased hunting films.

We recently had the opportunity to catch-up with Randy and ask him a few questions about his passion for hunting and conservation. If you have questions you’d like to ask Randy yourself, be sure to stop by BHA’s booth at ISE in Salt Lake City, Thur-Sun, where Randy will be giving out free DVD’s to all new BHA members.

When, where and how did you start hunting? Who were your mentors?

I started hunting when I was twelve, but had been tagging along with my Dad, Uncles, and Grandfathers from the time I was about four or five.

That was all in the thick woods of Northern Minnesota. A little town of 500 people, called Big Falls. Completely surrounded by State Forests, allowing me to hunt right out my back door, for the cost of the .410 shells the ruffed grouse required.

I had many hunting mentors. My Dad, Uncles, some neighbors who took special interest in my hunting endeavors. In my small town, all adults were looked to for guidance when it came to young hunters.

How did you end up with your own TV show?

Wow, that’s a long story. Short answer – “By accident.” My son got me started on the idea, then when I had given up and was selling cameras, a production company saw a promo reel my son had edited. They recruited me, almost against my will. The rest is history.

What’s the best and worst part about having your own TV show?

The best – Getting to meet so many wonderful people who stop to visit with me about our show and our message.

The worst – Being gone from home for four months in the fall, then on the road a lot in the winter during the trade show season. I am a home body and enjoy being home with my wife and dogs. The travel probably wears me down more than anything.

What is your most memorable backcountry hunt?

Hmmmm. There are many. Probably an archery elk hunt in New Mexico, where elk were visible from afar, but no one would go after them. It was a roadless area, a wilderness study area. The other hunters I met stated it was nearly impossible to get in on them in sparse cover and if you did shoot one, how would you get it out.

Just my kind of place. Me and a camera guy hiked in, arrowed a bull at two yards, and had it back to camp within twenty hours. People ask me what elk sign I look for. I look for the sign that says “No motorized travel beyond this point.” This hunt was further proof of that.

Threats – Many. Those who stand to benefit from altering the proven principles of the North American Model of Wildlife Conservation are organized poltically and financially. Go to any hearing or legislative session and see who is there trying to change the landscape. You will see a lot of paid lobbyists who are pros and a few hunters who can take the day off work and go testify as volunteers. The deck is stacked in that situation. The opponents now realize that and try to take decisions away from the public process of Commissions and Agencies and bring it to Legislatures and Congress, giving the paid and well-organized lobbyists a huge home field advantage in the game.

Opportunities – The rising interest Americans are developing in connecting to their food. Where it comes from, how it is acquired, etc. Hunters have been the leaders in sustainable organic food harvest since time began. Seeing many non-traditional hunters in the field, gives me a smile, as these are people who can articulate the value of hunting and easily make the connection to conservation as being the key to the future for both hunters and our wildlife.

What is one bit of advice that you would give to a young or new hunter?

Develop your own creed, your own ethos. Hunt for the reasons you want, not the reasons you might see on TV or read about in magazines. Learn of your hunting heritage and history and you will find more fulfilment in your role as a hunter and become a better ambassador for the cause of wildlife, conservation, and the hunters who sustain such.