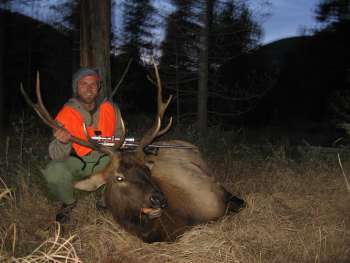 Even as I begin to write this, I’m still not sure what I should have done. Everyone has different opinions about what’s right and what’s wrong. How can someone else who considers himself to be ethical feel differently about a situation than I do, when I too, consider myself ethical? I don’t have an answer for that question, but it seems that the most I can ask from my fellow sportsmen is that when they face an ethical dilemma, they do their best to see both sides.

A couple of years ago, after months and months of research, I found my spot. My research and map reading and Google-earthing had presented me with what I was declaring my elk hunting honey hole before I had even been there.   My two elk hunting partners and I called this place the Wooded Glen Guarantee (named changed for privacy sake) because it looked so perfect.

Still having not been there, we settled on one particular park that we would hunt opening morning about 3 miles from the end of the road. It wasn’t going to be a particularly tough hike, so we didn’t set the alarm for too early. When the alarm did go off, we went through our routine and headed up the trail. Young and fit, we cruised up the mountainside, only stopping to shed layers. About a mile from the park – which was not a particularly big park, mind you – we came across an older gentleman walking up the trail. We stopped to talk to him for a minute-- because for all the people in the world, I feel I have the most in common with an elk hunter who is away from the road. With opening day’s shooting light only an hour away, we parted ways, but not before asking him where he was headed. Sure enough, he was headed to the exact same little park tucked away in the timber.

What were we to do? He had left his camp early to get to his honey hole. We, knowing our fitness level, had allowed ourselves to sleep in a tad longer, knowing that 3 miles was nothing. How much courtesy does one give a stranger – especially a kind elderly stranger? What would I want or expect if I were him? I imagine myself older, telling these whippersnappers to go deeper into the backcountry to a spot I went to as a kid, but also knowing that I couldn’t blame them for beating me to my spot.

It’s hard to admit, but we beat him to the park, leaving him to set up in a mediocre spot and hunt opening morning on the fringe. We didn’t harvest any elk that morning, and maybe that made him happy. Who knows?

I do know that I’m a different person now than I was 6 years ago when this happened. I like to think that now I’d invite him to sit with us in the hopes that we could glean some of his elk hunting wisdom. Or, better yet, just go deeper into the backcountry. Hypothetical situations are tough, but I hope that when I’m old and gray, I won’t just be a speed bump for some young bucks, but that I’ll be treated like the herd bull, viewed with reverence and appreciation. Yeah right.

What would you have done?