E-Bikes and the Backcountry 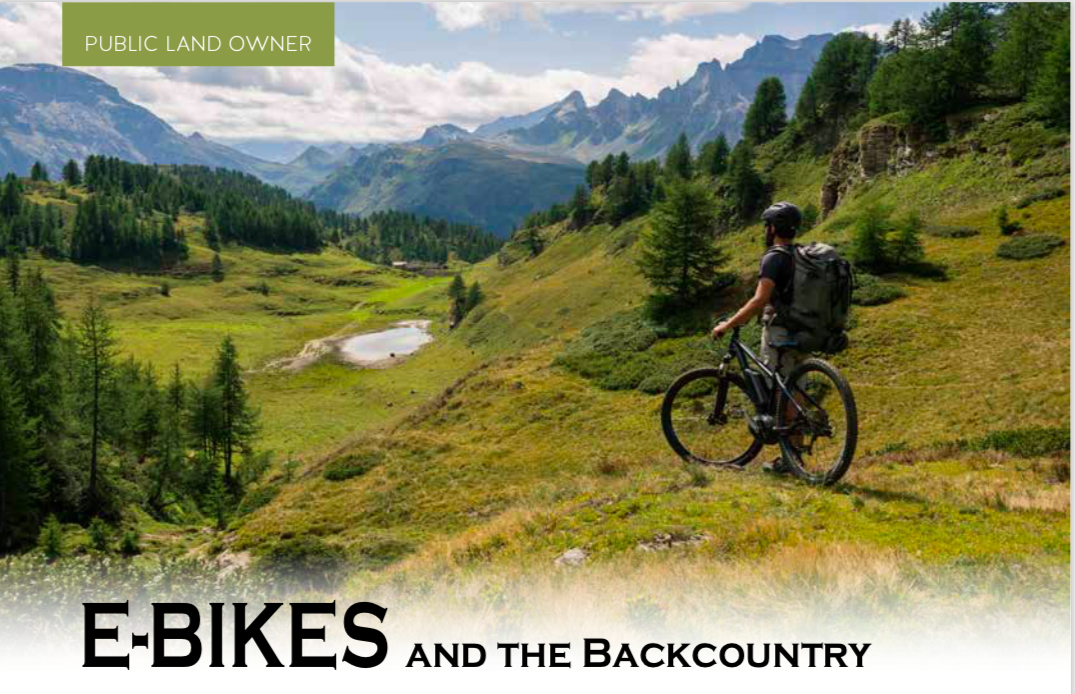 I’m not one to pass up a shot on an elk. My hunting buddies all give me a hard time about “ruining a great bow hunt” prematurely, as I tend shoot the first legal elk within comfortable range. I would argue my approach has been dictated by the fact that I’ve largely been limited to hunting Colorado’s increasingly crowded over-the-counter archery units for the past nine years, where if you have an interest in putting meat in the freezer, it’s best to take the shot when you get it.

But this year was different. Nine years of over-the-counter elk hunting had yielded enough preference points to draw a tag in a “trophy unit” with a near 50:50 bull to cow ratio and 80 percent of the unit in public ownership. I figured, heck, when in Rome it’d be worth testing my self-restraint to go after a big guy along with my friends who had drawn the same tag.

We gave it our all and had opportunities to shoot bulls nearly every day of the season, though the big guys had eluded us. The last week of the season I met up with a friend who had found a concentration of elk like he had never seen before – bulls bugling all day long. They were hiding out five to eight miles from camp, just off a dirt bike trail. We had found the elk motherlode, but it was a haul, and the better way to access it would be with the assistance of a dirt bike, e-bike or mountain bike.

So, we loaded up a mountain bike and a borrowed e-bike, and the next morning biked to within a mile of the elk. With packs loaded to the gills for an overnight trip, and plenty of pedaling still required, it wasn’t exactly an easy uphill climb, but the thought of riding a pack of meat back down on wheels eased a bit of my hesitation to let an arrow fly.

We were down to the last few days of the season, and I was needed back home, so it was time to fill the freezer. A perfect calling setup brought a smaller 5 x 5 within 20 yards – too good to pass up. I let the arrow fly, and he tipped over within sight. Six miles deep, our fingers were crossed that our experimental e-bike packout would work out as hoped. And, oh did it! The packout was a downhill roll and, where pedaling was involved, the e-assist kicking in made it perhaps wrongly easy. I lapped three of the four bags of meat out with daylight to spare, using the turbo e-assist on the uphill and riding the load downhill with relative ease.

A former mountain biker myself, the ride reminded me of the joys of cruising downhill on a single track – a joy that I had not experienced in years. Time for me to grab a new bike and rediscover old ways? Not exactly. In recent years, I’ve found myself more often pushing back on a seemingly relentless push by some in the mountain bike community for more trail development everywhere.

A growing breadth of scientific evidence is showing that recreational disturbance from mountain bikes and other uses is having a significant negative impact on elk populations in Colorado. Wildlife biologists are sounding alarm bells as widlife habitat on our public lands is increasingly being fragmented by both sanctioned and illegal user-created trails — in some cases leading to population level declines.

We simply cannot stand by as industry groups prevail in gutting the science and voice of the public from such important public land management decisions.

In this case, the e-bike provided for a quiet approach on an open motorized trail, where an early morning ride on a dirt bike would have likely disturbed the elk, as well as nearby hunters. It was the perfect place for an e-bike to be used – a place where, up until this summer, our federal land managers had consistently agreed these motorized bicycles should stay – on designated motorized routes.

BHA publicly agreed with this interpretation soon after it was clarified in 2016. Then in August 2018, in response to intel that the Trump administration may reverse course and open non- motorized mountain bike routes to e-bikes carte blanche, BHA join the National Wildlife Federation in delivering a letter clearly outlining our concerns that such a move could have on wildlife habitat and traditional non-motorized hunting and fishing opportunities.

Unfortunately, growing pressure from the booming e-bike industry led Secretary of the Interior David Bernhardt, with Secretarial Order 3376, to direct the U.S. Fish & Wildlife Service, Bureau of Land Management and National Park Service to unilaterally reclassify electronic motorized bicycles as “exempt” from motorized travel restrictions and facilitate e-bike use on existing mountain bike trails, while also stating that “e-bikes shall be allowed where other types of bicycles are allowed.” Subsequent agency guidance resulting from S.O. 3376 affirmed, “As the BLM works to fully implement SO 3376, District or Field managers should use the exclusion to the definition of off-road vehicle (OHV) at 43 CFR 8340.0-5(a)(3) to authorize the use of Class I, II and III1 e-bikes where ever bicycles are allowed, provided they are operated in the pedal assist mode.”*

Implementation of decisions to allow e-bikes on non- motorized routes have recently faced legal challenges, whereby the authority of our federal land management agencies to bypass a scientific review and public input process, as required by the National Environmental Policy Act, is being contested. E-bikes most certainly can have a place on our public lands. The ultimate question is: Where are they appropriate? Hunters, anglers and wildlife conservationists should have a say in where new motorized uses are proposed. We simply cannot stand by as industry groups prevail in gutting the science and voice of the public from such important public land management decisions.

The industry’s outsized influence on this decision has not gone unnoticed. In December, the Interior Department’s “E-bike Partner and Agency Group” was officially shut down after it was determined that a series of closed door meetings with e-bike industry lobbyists leading up to the issuance of S.O 3376 were illegal as they violated the public notice requirements of the Federal Advisory Committee Act.

While the legality of top-down e-bike travel management mandates will likely be debated for years to come, e-bikes will continue to gain popularity. Whether they’re used as an alternative to commute to work or to pack out an elk on a motorized route, their popularity is sure to continue to explode. It’s on all of us to help ensure future uses are planned responsibly – with wildlife and traditional recreational uses in mind.

BHA encourages members to actively engage in future decisions regarding motorized use on public lands by active participation with your local chapter and in public comment periods for the resource management plans and travel management plans that delineate trail and land use decisions.

Tim Brass is BHA’s state policy & field operations director and lives in Longmont, Colorado, with his wife Megan and their 4-year-old daughter, Linden.

share on
See other posts related to the campfire blog
Get the latest news and stories, right to your inbox.
Search
Local Chapters