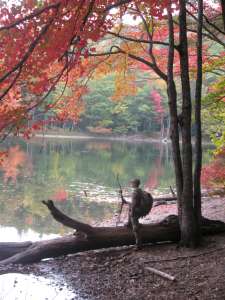 I awoke feeling optimistic about the day’s hunt. After almost forty outings last season trying to harvest my first animal using traditional equipment, it was an unusual feeling. When I moved out east, I had thought that I would have plenty of opportunities to use the more restrictive equipment hunting New Hampshire versus hunting the West, where I had all my life up until this point, because the East Coast is “over run with deer.” Little did I know that New Hampshire has about 5 deer per square mile and even less in the northerly and densely forested part of the state in which I live and hunt.  By way of comparison, Pennsylvania has about 30 deer per square mile.  In fact, there were very few deer here until logging came in and opened up the forest. Our forests are more suited for woodland caribou--long extirpated-- and for moose which are in steep decline, most likely due to a drastic tick increase due to climate change.

It had finally rained some the night before which I was hoping would help alleviate the dry and noisy conditions that had thus far made the hunting season exceptionally difficult. Making things more difficult for myself than necessary, I had decided not to use a tree stand which in these parts comes second only to a bow when in importance if you ask the locals. But, first and foremost, I don’t like heights. And second, l do like hunting new and different environments as often as possible. Besides, man harvested deer without tree stands for millennia. And I don’t like heights.

I planned on hunting a Nature Conservancy property near my house. It is the only place I have found where the nature of the forest allows me to “sneak hunt” and even then only after it has rained making the ground quiet enough that I might come upon a deer within recurve range. However, the Conservancy was doing what they do best that morning, managing their lands in an ecologically constructive manner using a controlled burn right in the area I wanted to hunt. Despite the fact that the smoke would have masked my scent wonderfully, I decided to hunt a different part of the property. I was going in in the dark not having a specific spot in mind. I only knew that a ridge and road combined with a large pond and boggy area that seemed to funnel deer along a narrow bench.

I settled in against a large oak with a downed tree behind me to break up my outline. As I waited for light, I was treated with New England’s quintessential “call of the wild,” a couple of loons hollering back and forth. As shooting light approached, rapid crunching came over the rise behind me. I glanced over my shoulder to see a bear coming right at me. I admit, I panicked, grabbed my bow, turned around to face my foe and scare what was actually a young doe away. I laughed a little, let my heart slow down and resolved to the idea that I had ruined that chance. Too bad because she was exactly the quality deer I was looking for, one with back straps, tenderloins and rump roasts.

But, as luck would have it, the doe hesitantly came back my way. I have experienced this a few times with whitetails but never with elk or mule deer. They get spooked, blow and then decide they need to know what scared them. She slowly approached, stomping her hooves and bobbing her head up and down as if to bait me into giving up my human form. She moved from my right to left at about 25 yards, and then started to angle towards me. She was mostly obscured by brush the whole time while occasionally stomping, bobbing her head and staring in my direction. She was about to walk into a gap in the brush were I would have had a shot at less than 20 yards. I moved slightly to have a better angle for the shot and rustled some leaves as I drew, she blew again and ran off. Just for kicks I blew a couple of fawn bleats, and she came trotting back again to investigate. Too good to be true.

The routine began again. She would stomp some, bob and weave and pace back and forth, always keeping some obstruction between myself and her vitals. This went on for what was probably 30 to 40 minutes. This time she wound herself through the brush to about fifteen yards and was about to expose her vitals to me once again. As I drew, my feet asleep after sitting on them for the better part of a half an hour, I lost my balance and had to use my string hand to catch myself. She, of course, saw all this, blew and ran off again.

I stood up, stretched a little and decided to turn and face down the bench to the main trail when crunch, crunch, crunch came the doe again as if she was somehow enjoying being in close proximity to a potential predator. This time, however, she came back to where there was much less brush and therefore many more openings and, to boot, she walked right into twelve yards and turned broadside. Despite the comparative lack of brush in this direction, she managed, of course, to keep a brushy pine in front of her vitals for what was probably 10 minutes. I was frozen in a half squat and half bent over position trying not give up my lethal intentions. She finally gave me the break I needed when she took a step, looked the opposite direction and put her vitals in an opening in the brush. Just for the record, I want to point out that this game had been going on for at least 45 minutes now, and I had had plenty of chances to try and sneak arrows through brush which I passed up for fear of wounding her. I had also resolved myself to only shoot if she was close, looking away and I could “pick a spot” very low in the vitals so if this very alert deer jumped the string the arrow would hopefully still find vitals.

Now with the doe looking away and seeming strangely relaxed, I picked a spot and let the arrow fly. Much to my dismay the arrow seemed to bounce off of some invisible obstacle in the air and skip out in front of the deer. I sat there stupefied trying to figure out what had just happened. I waited a few minutes to settle down and decided to find my arrow and confirm a miss. As I reached the spot where the doe stood minutes before and looked back at my hiding place, I could clearly see that there were several thin twigs in my arrow’s flight path. I thought I had been careful…but clearly not. I scolded myself and began my search for the arrow off in the direction I thought it had deflected. After 20 or so minutes of searching I had a creeping thought, “perhaps I had not had a clean miss and this poor animal had run off with my arrow somewhere in her body.” I widened my search into broad semi-circles when I finally saw fletch sticking out from behind a large pine tree. I was shocked to see that the end of the arrow had blood on it indicating a mere seven inches of penetration.

Having no idea where I had hit her, I decided to give her a few hours so she would hopefully bed down and bleed out. I returned home, waited the allotted time and returned with my girlfriend to help with the tracking job and what I was sure was going to be a long day of searching for a lost deer. I led on the blood trail should another shot opportunity present itself, occasionally signally to Julie to flag a branch above blood sign in case we had to back track. Feeling as low as I can remember on a hunt, nauseated, guilty and self-conscious, we walked up on her body just twenty-five yards from where I had found the arrow and less than a hundred from where I hit her. The usual moment of joy was replaced with relief. I still cannot explain the how or why, but the arrow entered in her rear quarter and angled up into her liver proving to be quickly fatal. Some combination of deflection and her jumping the string had apparently guided the arrow into her rear leg which I couldn’t even see when I shot. All I can really say is that I feel very fortunate that this ended with meat in the freezer and relatively little suffering for the deer.

About Brandon Ellis
share on
See other posts related to Backcountry Stories, The Campfire
Get the latest news and stories, right to your inbox.
Search
Local Chapters