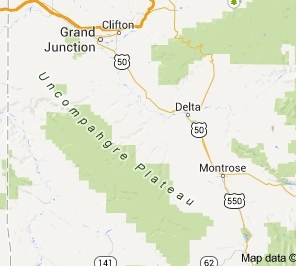 The Uncompahgre Plateau in western Colorado is a vast, remote chunk of geography that encompasses red rock desert canyons and magnificent aspen and ponderosa forests. It features tiny perennial trout streams that originate in the snowy high reaches and descend 4000 feet unchecked, carving 20 mile canyons before plunging into the Gunnison and Dolores Rivers in the hot deserts below.

This diverse landscape abounds with herds of elk including the famous trophy bulls found in game management unit 61. It is also home to impressive mule deer that get big in the remote canyons, as well as rare Desert Bighorn Sheep. Hunters covet the opportunity to pursue these animals in a stunning setting, and spend many years patiently acquiring the points needed to finally be awarded a tag. And once you get out there you’ll probably hear a lion scream on the rimrock and see bear tracks down along the streams.

The Plateau is divided into large units of National Forest, BLM and patchworks of private lands. Recently the BLM designated the 210,000 acre Dominguez-Escalante National Conservation Area, including the 66,000 acre Dominguez Canyon Wilderness. Now the 2 major BLM units as well as the NCA are in various stages of developing the Resource Management Plans that will guide decision-making for the next 20 years. At stake are determinations for critical issues like travel management, allowed recreational and resource development, and future potential wilderness designations.

BHA, through the involvement of local members, recognizes the unique hunting and fishing opportunities available on the plateau and realizes that now is a critical time to weigh in on the BLM’s Resource Management Plans. Whether it is getting an over the counter Bull tag in unit 62 and heading out to hunt with your uncle on a last minute November hunt, getting a once in a lifetime chance to hunt a desert bighorn ram, hiking several miles in to fish for native cutthroats in a red rock canyon, or trying to decipher the ancient petroglyph hunting maps left by indigenous people, these require large chunks of well managed backcountry habitat, opportunities for a certain degree of solitude, as well as appropriate points and methods of access.

In these efforts BHA lends a credible, boots on the ground perspective blending traditional uses with a conservation ethic. The managers responsible for developing quality Resource Management Plans in the Grand Junction Field Office are trying to create plans that ‘do the right thing’, but to really make it happen they need to know that the hunters and anglers who depend on this wild country are behind them.

If you hunt or fish on public lands in the Grand Junction area and would like to get involved with protecting what you currently enjoy, please get in touch.