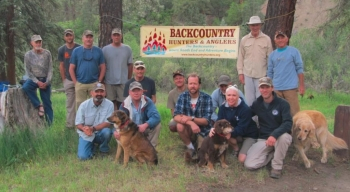 Colorado BHA held its sixth annual Rendezvous during June 6-8. A group of 20 attendees from around the state set camp in southwest Colorado’s San Juan National Forest south of Pagosa Springs. Camp was located on the Blanco River with easy access to fishing/hiking and within a stone’s throw of the 158,000-acre South San Juan Wilderness, home to the last known grizzly bear to roam our state.

*See this link for more photos from the rendezvous.

It was a relaxed, mostly unstructured “get acquainted” weekend with some serious conversation, plenty of laughter, and great weather. During the day Saturday, folks dispersed to go hiking and fishing in the surrounding San Juan National Forest/South San Juans Wilderness, returning during the late afternoon for an informal chapter meeting to discuss where we’ve been, where we’re going, and to recognize our collective contributions to BHA’s conservation and other successes. Saturday evening we commenced with a group wild game cookout that included plenty of elk brats, burgers, and sides.

One of Colorado BHA’s recent significant successes was the BHA North American Rendezvous and 10-year anniversary in Denver (Mar. 21-23). For comparison purposes: in Missoula (2012) we had 120 attendees, in Boise (2013) 160 attendees, and in Denver (2014) 290 attendees! In the words of BHA executive director Land Tawney, “We formed 10 years ago, and BHA was formed by men and women who were passionate about the backcountry. At the time there wasn’t really one organization focused fully on the backcountry. Since then the organization caught fire and now today we have 17 chapters across the country and Canada, including New York and Pennsylvania, and just about every Western state.”[1]

And another indicator of Colorado BHA’s ongoing contributions to the continued growth and effectiveness of BHA (in both Colorado and nationwide): we currently have three chapter members on the BHA Board of Directors and three BHA national award winners (not to mention our 24 Habitat Watchmen), which speaks to the widespread level of commitment among Colorado BHA members.

In fact, I’d say the level of our chapter commitment to the future of BHA is unmatched, and adding your voice to the chorus will help keep BHA growing and moving in the right direction. Since the Colorado BHA chapter was founded by David Petersen in 2005, we’ve grown to nearly 300 members along with 15 Life Members with 24 Habitat Watchmen volunteers serving as our “eyes and ears” on 10 of 11 Colorado National Forests. And we still have Habitat Watchmen openings. Contact chapter chairman David Lien ([email protected]) if you’d like additional information or want to volunteer.

“Theodore Roosevelt fell in love with the West hunting in the backcountry,” explains Land Tawney. “What he fell in love with was the challenge and the thirst for life that you only get in the backcountry. I take solace in the fact that we are protecting the backcountry much like he did.”[2] And as BHA founder Mike Beagle said, “We will continue to be a voice for core values of solitude, challenge, freedom and tradition so badly needed in the world where outdoor pursuits risk becoming more about selling products and technology instead of exercising skill and woodcraft. BHA is getting better and better. The best is yet to come.”