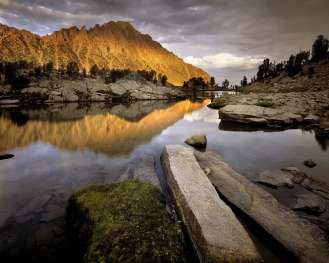 "A big backcountry high five to Senator Risch and Congressman Simpson for conserving one of the most iconic parts of Idaho," said BHA President and CEO Land Tawney. "For years, hunters and anglers have been working to secure the future of the Boulder-White Clouds. Getting this legislation over the finish line proves that boots-on-the-ground solutions really do work."

BHA members both in Idaho and elsewhere access the Boulder-White Clouds for hunting, fishing and other activities, and BHA has historically supported conservation of the region. Derrick Reeves, co-chair of BHA's Idaho chapter, welcomed the news of the bill's passage.

"The collaborative effort required to move this bill forward provides a road map for Idahoans to craft local solutions benefiting sportsmen, public lands, water and wildlife - in landscapes that have provided outdoor opportunities for Idahoans in the past and will continue to do so in the future," said Reeves, a resident of Deary. "The Idaho chapter of Backcountry Hunters & Anglers commends Representative Simpson and Senator Risch for their commitment to conserving the Boulder-White Clouds region."

Ian Malepeai, co-chair of the Idaho chapter, emphasized the importance of the Boulder-White Clouds to Idahoans.

"When I was growing up, my family relied on the Boulder White-Clouds region for our time afield," said Malepeai, who now lives with his own family in Boise. "Generations of Idahoans continue to access this quintessentially Western landscape for hunting, fishing, hiking and simple solitude. The fact that its conservation has resulted from a collaborative, grassroots movement by folks who appreciate and value all that it offers gives me hope for my kids and grandkids - and moves me to offer thanks to our elected officials for their commitment to Idaho's outdoor traditions."

In the Interior Columbia River Basin of Idaho, 60 percent of the most productive trout and salmon habitat, 85 percent of the healthiest populations of all western cutthroat trout species and 76 percent of the remaining healthy populations of bull trout are found in roadless areas. Idaho's backcountry lands comprise one of the state's most valuable natural assets.